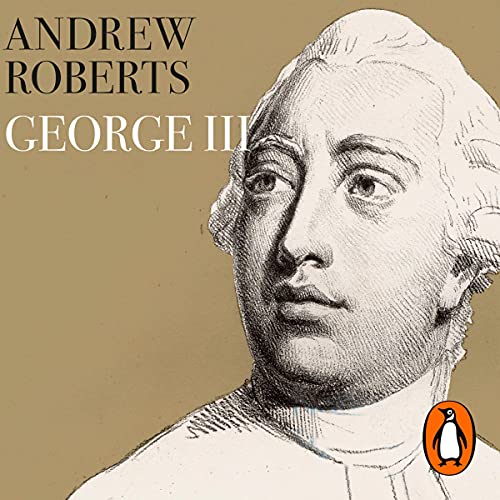 George III: The Life and Reign of Britain's Most Misunderstood Monarch

George III, Britain's longest-reigning king, has gone down in history as 'the cruellest tyrant of this age' (Thomas Paine, 18th century), 'a sovereign who inflicted more profound and enduring injuries upon this country than any other modern English king' (WEH Lecky, 19th century), 'one of England's most disastrous kings' (JH Plumb, 20th century) and as the pompous, camp and sinister monarch of the musical Hamilton (21st century).

Andrew Roberts' magnificent new biography takes entirely the opposite view. It convincingly portrays George as intelligent, benevolent, scrupulously devoted to the constitution of his country and (as head of government as well as head of state) navigating the turbulence of 18th-century politics with a strong sense of honour and duty. He was a devoted husband and family man, a great patron of the arts and sciences, keen ('Farmer George') to advance Britain's agricultural capacity and determined that her horizons should be global.

The book gives a detailed, revisionist account of the American War of Independence, amongst other things persuasively taking apart a significant proportion of the Declaration of Independence. In a later war, it shows how George's support for William Pitt was crucial to the battle against Napoleon. And it makes a credible, modern diagnosis of George's terrible malady that robbed him of his mind for the last 10 years of his life - his other main claim to the popular imagination.

Roberts argues that, far from being a tyrant or incompetent, George III was one of our most admirable monarchs. George III shows one of Britain's premier historians at his sparkling best.

Switch between reading the Kindle book & listening to the Audible narration with Whispersync for Voice.
Get the Audible audiobook for the reduced price of $14.99 after you buy the Kindle book.
Last chance - Ends Thursday!
Learn more about membership
By completing your purchase, you agree to Audible’s Conditions Of Use and Privacy Notice.
Sold and delivered by Audible, an Amazon company

4.5 out of 5 stars
4.5 out of 5
153 global ratings
How are ratings calculated?
To calculate the overall star rating and percentage breakdown by star, we don’t use a simple average. Instead, our system considers things like how recent a review is and if the reviewer bought the item on Amazon. It also analyses reviews to verify trustworthiness.

Loverofbooks
4.0 out of 5 stars Long, complex but ultimately an excellent work
Reviewed in the United Kingdom on 27 October 2021
Verified Purchase
This is, ultimately a masterly piece of writing which although lengthy in pages, can be complex in its arguments about the loss of America, the British political system and King George's illness, is a very rewarding book and excellent piece of revisionist assessment about 'mad' King George.

Whilst the central part of the book is about the development leading to America breaking away from British rule, it seemed to me to move so far away from being part of a biography about King George, it became almost a book within a book.

This most certainly a new and refreshingly new assessment about one of Britain's monarchs who stood astride the impact of the Tudor and Stuart eras with only the early impact of the Industrial Revolution which during the reigns of George IV, William IV and Victoria changed Britain again into the landscape we inherited during the 20th Century.

The personality clashes between King George and various political figures are astounding to read, at times quirky, funny and tragic to register how they impacted upon everyday life.

The book is well worth the read, for all of it being a very long and demanding read, although it would have been good to learn more about his ideal marriage to Charlotte and the very obvious dislike of the father and his son, the eventual King George IV.
Read more
7 people found this helpful
Report abuse

Stephen Lees
5.0 out of 5 stars Andrew Roberts in mid-season form
Reviewed in the United Kingdom on 5 December 2021
Verified Purchase
With this exhaustively researched, cogently argued and entertainingly written revisionist biography, Andrew Roberts confirms his reputation as the doyen of historians. I heartily recommend it, especially (Dare I say it?) to Americans.
Read more
6 people found this helpful
Report abuse

PaulS
5.0 out of 5 stars Excellent read so far.
Reviewed in the United Kingdom on 23 October 2021
Verified Purchase
I am only sixty pages in but it is an excellent read so far. A good mix of personal, political and historical information. It is also very easy to read and understand. I enjoyed 'George III: America's Last King' (Yale English Monarchs ) by Jeremey Black, but I think I'm going to enjoy this even more.
Read more
5 people found this helpful
Report abuse

Philip Bennett
5.0 out of 5 stars Changing minds on Britain's most "misunderstood" monarch
Reviewed in the United Kingdom on 30 November 2021
Verified Purchase
What at first seems a daunting tome rapidly becomes and engrossing ourney through the life and times of one of Britain's most "misunderstood" monarchs. George III lived through a time of incredible change for Britain and the world and is often thought of as a bystander due to his mysterious illness, but can be found in the thick of the political and cultural centres of the age. A well-researched and insightful work that I found approachable for the layman-reader and in-depth for the academic one.
Read more
4 people found this helpful
Report abuse

kittyreader
5.0 out of 5 stars A new perspective on a much misunderstood monarch
Reviewed in the United Kingdom on 11 November 2021
Verified Purchase
I studied George the third for history O level in the seventies.
I thought that this book shed a new light on the king .
Well researched and interesting to read.
Read more
3 people found this helpful
Report abuse
See all reviews