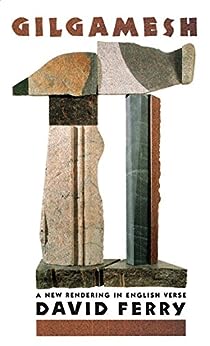 by David Ferry (Author) Format: Kindle Edition
See all formats and editions
Sorry, there was a problem loading this page. Try again.

A new verse rendering of the great epic of ancient Mesopotamia, one of the oldest works in Western Literature. Ferry makes Gilgamesh available in the kind of energetic and readable translation that Robert Fitzgerald and Richard Lattimore have provided for readers in their translations of Homer and Virgil.

"There have been other English accounts of this hero with a thousand descendants, but this is the first one that is as much poetry as scholarship." --Michael Dirda, The Washington Post Book World

"Ferry's Gilgamesh is uniquely his own, self-contained in holding aloof from fads and hype. No display of adjectival fireworks could do justice to his poem's originality or to the integrity of the poet's formal invention. In identifying the poem as Mr. Ferry's, I mean no disrespect to Sin-leqe-unninni, the ancient poet-editor that Babylonian tradition credits as having developed to their highest form the epic adventures of Gilgamesh, King of Uruk, and his companion, Enkidu. But like Edward Fitzgerald's Rubaiyat or Ezra Pound's Cathay, Mr. Ferry's Gilgamesh is a miraculous transformation of his original into his own, utterly distinctive idiom . . . Perhaps the poem's most moving element is how the desire for fame is superseded, after the death of Enkidu, by a quest that touches every reader, ancient or modern. . . the wish for physical immortality . . . [Ferry's] technical genius and literary sophistication evoke not only the hero's anguish, but the rage and despair of the untouchable." --Tom Sleigh, The New York Times Book Review

"The Gilgamesh epic . . . came to light again in the mid-19th century and, thanks to the labors of an arduous, exacting philology, slowly began to assume its place as one of the great poems of the world. Hitherto, however, it has existed only in posse, waiting for a poet who could actualize it. David Ferry has performed this service, and has given us a noble poem as close to the ancient original as we in our ignorance have any right to. May his achievement quickly win the recognition it deserves." --D.S. Carne-Ross, The New Criterion

David Ferry, a finalist for the National Book Critics Circle Award in Poetry for his translation of Gilgamesh, is a poet and translator who has also won the Lenore Marshall Poetry Prize, given by the Academy of American Poets, and the Rebekah Johnson Bobbitt National Prize for Poetry, given by the Library of Congress. In 2001, he received an Award in Literature from the American Academy of Arts and Letters. Ferry is the Sophie Chantal Hart Professor of English Emeritus at Wellesley College. --This text refers to the paperback edition.

4.6 out of 5 stars
4.6 out of 5
175 global ratings
How are ratings calculated?
To calculate the overall star rating and percentage breakdown by star, we don’t use a simple average. Instead, our system considers things like how recent a review is and if the reviewer bought the item on Amazon. It also analyses reviews to verify trustworthiness.

Reader
5.0 out of 5 stars By far the most enjoyable Gilgamesh translation
Reviewed in the United Kingdom on 11 April 2021
Verified Purchase
I browsed quite a few Gilgamesh translations, but this is by far the most enjoyable reading experience. Other translations have been too academic for my taste, spending inordinate time interrupting the narrative with considerations of different versions of the epic in different tablets. This one provides full immersion in a rich language that keeps the reader engaged till the end.
Read more
One person found this helpful
Report abuse

THe Neuro
4.0 out of 5 stars A Wonderful Translation of the Ancient Sumerian Tale
Reviewed in the United States on 22 May 2012
Verified Purchase
This English verse translation of Gilgamesh, by David Ferry, is not taken literally, but is translated so a to make sense to English readers. Hence it is easy to read for any good readers.
The book tells the story of Gilgamesh, the stormy-hearted ruler of the city-state of Uruk. At the request of the people oppresed by him, Gilagemesh is given a companion, Enkidu. The two become inseparable, and have many adventures together. First they slay the Dragon Huwawa of the Cedar Forest, and make a great gate for their city. Then they kill the Bull of Heaven. This angers a Goddess Isthar, who convinces the Gods that Enkidu must die. After Enkidu's death, Gilagamesh becomes distraught, and dreads the fact that one day, he too will have to fact the same end that Enkidu did. Attempting to avoid his fate, he starts on a nearly impossible mission the meet Utnapishtim, the only immortal man, in hopes that he too might gain immortality. He is unsuccesful at getting eternal life, however so he returns home. One day he is able to talk with the spirit of Enkidu from the Netherworld, and learns that those who have many to mourn for them live the most comfortably in the Nether.
The book contains 92 pages of wellp-spaced lines of easily understandable prose, as well as an introduction at the beginning and some notes at the end. Any fluent reader will have no problem reading this book and it is very exciting and suspenseful. A tale from ancient civilizations, it contains similarities to the story of Noah and the flood from the Bible, with Utnapishtim being the "Noah" character. It is a must read for anyone who enjoys ancient stories, and a good read even for those who don't.

Geoff Puterbaugh
5.0 out of 5 stars A work of art!
Reviewed in the United States on 11 January 2006
Verified Purchase
Translating poetry is a tricky thing. Some people maintain that it can't be done. I would say that the translator can set himself three possible goals. First, he can try to create a "trot," a plain, "literal" translation where every word of the original is explained. See Nabokov's "Eugene Onegin" for an example of this. Second, he can try "simply" to translate it, to give his reader a good idea of what is there on the page, the mood, and so forth. LOTS of translators do this.

Third, and most elusive, most difficult, is to create a work of literary art IN ENGLISH (or whatever the target language is). Hopefully this third goal will automatically include all the most important elements of "mere translation." But, if the translator succeeeds, he will have created an independent work of art which will then take on a life of its own. The most famous example of this would probably be FitzGerald's "Ruba'iyat of Omar Khayyam," probably better described as a fantasy and variations on themes of Omar Khayyam. Alexander Pope's translation of Homer's "Iliad" surely has legs, still in print after all these years.

David Ferry has attempted the third goal in his translation of "Gilgamesh," and to my mind he succeeds. The result is a moving and beautiful work of literary art, and I predict a very long life for it.
Read more
20 people found this helpful
Report abuse

Joey
5.0 out of 5 stars A fine, faithful version.
Reviewed in the United States on 8 March 2016
Verified Purchase
I've read two translations of Gilgamesh over the years ( Dalley's in Myths from Mesopotamia, and the prose version published by Penguin classics ). I enjoyed them but Ferry has given us a beautiful poetic version that, although faithful to the translations, is liberated enough from them for the artistic spirit to soar, thus giving us the heart and beauty of this timeless story.
Read more
6 people found this helpful
Report abuse
See all reviews
Report an issue
Does this item contain inappropriate content?
Report
Do you believe that this item violates a copyright?
Report
Does this item contain quality or formatting issues?
Report