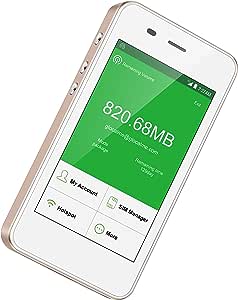 Connect Global, Pay Local
Stay online globally without any SIM card and roaming fee! GlocalMe is redefining the way we stay connected to the internet globally by offering network compatibility with a number of carrier networks in 106+ countries and regions around the world.

Cost-effective data rates
GlocalMe brings affordable, predictable and flexible rates to fit your need. You can do pay-as-you-go and pay only for the data you actually used. GlocalMe also provides quite a few multi-country or single-country data packages at even more favorable prices. More details about coverage and data packages visit our website: www.glocalme.com.

Works as a traditional hotspot
Two SIM card slots for your favorite destinations, U2 can also be used as a traditional unlocked Wi-Fi hotspot with the insertion of local SIM card to receive local 3G/4G network signals.

4.1 out of 5 stars
4.1 out of 5
833 global ratings
How are ratings calculated?
To calculate the overall star rating and percentage breakdown by star, we don’t use a simple average. Instead, our system considers things like how recent a review is and if the reviewer bought the item on Amazon. It also analyses reviews to verify trustworthiness.

WiFi broadcast strength is extremely poor. I bought this device to use for internet access on oilfield locations, where accommodations are typically small metal walled shacks. The wifi signal produced by this device is the weakest of any device I've used, often being unable to penetrate a door or wall.

By comparison, I can put an HP250/252 mobile printer, iphone, laptop, Huawei E8372 not just outside, but in a completely separate shack 20-50 ft away and connect to it them with any device, without a good signal. The Glocalme G3 can be found by my laptop with an intermittent connection, and my iphone cannot pick it up, if the Glocalme is just outside the door or even on the roof, less than 6' from the devices.

Below average for a hotspot. Unfortunately this particular device has no external antenna ports (TS9, etc), so in areas of weak coverage, the device will not pick up a signal, even if your phone can manage a usable connection to the same network. The lack of antenna connection is just bizarre for a product of this purpose and price.

The device GUI leaves a lot to be desired. In Vsim mode there isn't any ability to set 2G/3G/4G or choose/view available networks. You just need to hope that it connects to usable connection. In Amsterdam airport, this worked fine, however in Saudi Arabia so far it seems to choose a network with poor connectivity, when my iphone 6 can choose any of the three networks with better results.

Furthermore in local sim mode, all you can really do is choose APN and 2G/3G or 2G/3G/4G. That's about as complex a preference you can access.

The App itself is exceptionally poor. You can use it to purchase data, and that's about it. No ability to change any settings on the GlocalMe, which is a major let down. Often with a poor connection you may want to try moving the device to different areas to improve connectivity to a cellular network. However signal strength isn't even accessible on the app. You also cannot toggle which SIM to use other than physically on the device.

The interface itself is poor. For instance "Data Connection" title for a toggle button is also link to a data connection configuration pane, where you can select your APN and network type. However this link is in the same font, and position as all other parameters being displayed so, it isn't at all intuitive to click on or attempt to access. A very frustratingly and poorly executed App overall.

Just about any mainstream wifi hotspot will perform better than this device, and give you more configuration options, and most importantly a usable wifi connection to the device. I have a very inexpensive and old E8372 that is a far better performer, and they run well under $50 USD to purchase and also have TS9 antenna ports for areas of poor signal strength. Moving up from there an E5577 is twice the product for half the price.

That said, for the VSIM side of things, I would still recommend this product over the round orange competitor. The data bundles are easy to purchase and have a good variety. It's a very convenient feature, and is the only reason this device receives 3 instead of 2 stars. Without the VSIM and data packages they're offering, this hotspot is not worth anyone's money.

In a city with extraordinary cellular coverage, this device may be more desirable, but don't expect to be able to wander far from it.

H. Low
5.0 out of 5 stars Does what it says!
Reviewed in Canada on 31 May 2018
Colour: G3-BlackVerified Purchase
Finally put this to the test for 1 month in Asia. Works as described but here are some good and less good points.

GOOD.
1) Way better than WIFI hotspots (like USELESS RIP OFF DOCCOMO). My “go -to” when i needed gps for directions eyc.
2) Works as advertised and reliable.
3) Long battery life, and can act as power pack
4) Easy to add more time.
LESS GOOD
1) A bit heavy (more nusance than huge problem).
2) Does not work “anywhere” and still needs cell towers, so it does NOT work at sea like on a cruiseship unless in port.
3) Freezes (albiet rarely). When it freezes you need to reset the device.
4) Had a bad habit if switching to another lanuguage (Korean for some reason). Did this several times a day! Never happened in Singaport or Toykyo. Most of this happened in Hong Kong for some reason, as their company is there! No problems eleswhere (Malaysis, Tokyo).

canuck
5.0 out of 5 stars GlocalME G3 is a game changer for world traveler
Reviewed in Canada on 28 May 2018
Colour: G3-BlackVerified Purchase
The GlocalMe G3 performed flawlessly on my Western Mediterranean trip to Spain, Italy, and France. As I moved between the countries, the data connection switched over with no issue. I was able to use it (with slow connection) even out at sea on a cruise ship that was sailing close to shore along the French Riviera. Note, this device will not work out at sea with no network signal. The free 1.1GB came with the unit lasted me 10 days of light use. Purchased a data package addon near the end of the trip, it activated automatically with no issue.

Since other users reported data drain, I disabled photos and videos backup/synch to the cloud. I had no issue with data drainage. I also have had no stalling/freezing or any UI issue that some have reported. May be they got a lemon. It is a little heavy. So, I found an old mobile phone case with a belt clip and wear it on my belt when I am moving around in the city.

This device is perfect for traveling to different countries with short stays where you dont want to bother with switch local sim cards frrquently and you have very light usage such as messaging, maps, and light browsing. If you are staying at one location for a week or longer, you would be better off getting a local sim card which will be significantly cheaper.
Read more
15 people found this helpful
Report abuse

Darcy MacDonald
5.0 out of 5 stars Very reliable, great speed & coverage
Reviewed in Canada on 23 September 2018
Colour: G3-BlackVerified Purchase
I used it for the first time on a cruise around the UK, and it worked perfectly. I popped in a local SIM for cheaper data and switched between that and the built-in data package as needed (my UK sim didn't work in Ireland for example, so I used the Glocal data). I just bought some additional data for an upcoming trip to Florida. The Glocal data is cheaper than buying a prepaid SIM in the US. But the great thing is you have the option of using that local SIM if you can find a better deal in some parts of the world.

The other thing I've found is that when I hit my monthly data limit on my own plan at home, buying some Glocal data in Canada is cheaper than paying overage charges to my own carrier (Bell).

Battery life is great, stability is great (never had to reboot the thing). Very happy I bought it.

The only slight downside is the 5 user connection limit, so I occasionally had to kick the kids off it.
Read more
8 people found this helpful
Report abuse

YouMeAndUmmi
5.0 out of 5 stars G3 worth the price
Reviewed in Canada on 17 July 2018
Colour: G3-GoldVerified Purchase
I did a lot of research into mobile cloud Sim devices and this is pretty much the only option if you want unthrottled data by purchasing a select amount. The data price packages vary from place to place but seem to be an okay price. It doubles as a charger for your phone which is pretty useful. When you download the app after purchasing the product they give you some useful tips on how to save on data usage. It also comes with a slot for 2 Sim cards which I think makes this device unbeatable since you could just use a Sim card in the country or countries your travelling to if the plans are cheaper than the cloud Sim prices through the company. Will be using it soon on a trip so I can update then but I did a speed test in Canada while connected to it and it was fairly fast. So far 5/5.
Read more
13 people found this helpful
Report abuse
See all reviews
Get FREE delivery with Amazon Prime
Prime members enjoy FREE Delivery and exclusive access to movies, TV shows, music, Kindle e-books, Twitch Prime, and more.
> Get Started
Back to top
Get to Know Us
Make Money with Us
Let Us Help You
And don't forget:
© 1996-2020, Amazon.com, Inc. or its affiliates