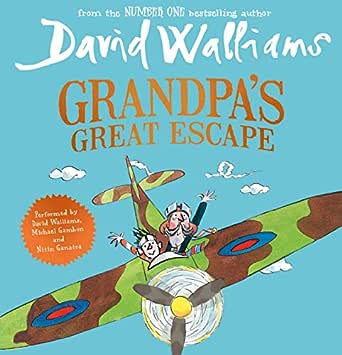 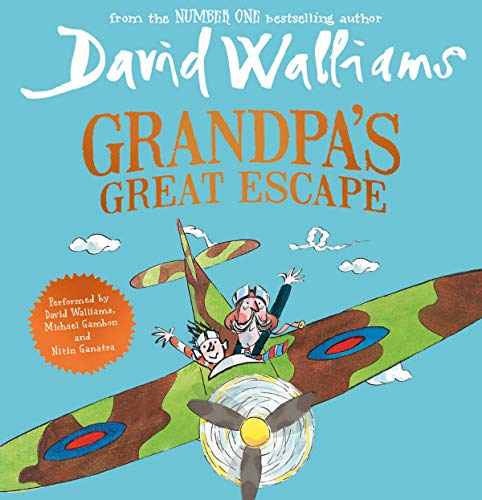 4.8 out of 5 stars
4.8 out of 5
3,243 global ratings
How are ratings calculated?
To calculate the overall star rating and percentage breakdown by star, we don’t use a simple average. Instead, our system considers things like how recent a review is and if the reviewer bought the item on Amazon. It also analyses reviews to verify trustworthiness.

NicShef❤️Reading
4.0 out of 5 stars Crazy and heartwarming...
Reviewed in Australia on 24 March 2017
Verified Purchase
This review is from my 10 yr old son. He said it was a good heartwarming story, but he thought its for younger kids because it's a little bit soft and there is no action. I read it and thought it was gorgeous and funny. It's a lovely take on dementia in the elderly and reflects the boys love of his grandpa. We decided together to give it 4 stars.
Read more
2 people found this helpful
Helpful
Comment Report abuse

Thomas Alexander Eley
5.0 out of 5 stars Great Book
Reviewed in Australia on 13 August 2016
Verified Purchase
David Walliams has done it again!! This is an adventurous funny book and like all his others you get stuck into it very quickly! It is a great book for children (7-9 years old) but even older children like me will really enjoy it as Well! I really liked the book and certainly recomend it to anyone who likes a good laugh!!!
Read more
One person found this helpful
Helpful
Comment Report abuse

Sonny Neale
5.0 out of 5 stars It was fabulous
Reviewed in Australia on 18 May 2018
Verified Purchase
My boys love planes and thought the book was very cool because it had adventures like driving a tank through a wall and escaping from an old persons home.
Read more
One person found this helpful
Helpful
Comment Report abuse

Leanne Dodson
5.0 out of 5 stars Grandpa's great escape
Reviewed in Australia on 23 January 2017
Verified Purchase
Amazing. Amazing no other way to describe it. One of my favorite books!!! Sorry Roald Dahl David William is my favorite now.
Read more
One person found this helpful
Helpful
Comment Report abuse

aliceb
5.0 out of 5 stars Amazing book
Reviewed in Australia on 8 June 2017
Verified Purchase
It was a very good book and very good features about WW1 with colditz castle and prisoner of war features
Read more
One person found this helpful
Helpful
Comment Report abuse

Amazon Customer
5.0 out of 5 stars Grandpa's Great Escape
Reviewed in Australia on 21 June 2016
Verified Purchase
I liked all the twist in the story .I would recommend it to all people who like thrilling, funny Adventure,s
Read more
One person found this helpful
Helpful
Comment Report abuse

Amazon Customer
5.0 out of 5 stars LOVED IT!
Reviewed in Australia on 21 April 2016
Verified Purchase
Fantastic book I recommend it to all ages who can novels and who are interested in airplanes.
Read more
One person found this helpful
Helpful
Comment Report abuse

Brent Towns
5.0 out of 5 stars Up, up, and away!
Reviewed in Australia on 24 October 2017
What a fantastic story.
We read Grandpa as a family and what a thoroughly enjoyable story it was.
The love between a Jack and his grandfather was unbreakable and he would go to extraordinary lengths for the old man.
They both shared a passion of flying and although his grandpa was slowly losing his mind, Jack swore he would be there for him.
But Jack's mum and dad want to put him away in a nursing home called Twilight Towers. That's when the fun really begins.
This is a book for all ages. Whether you are 6 or 66 you'll laugh and cry right along with Jack and his Grandpa as they go from one adventure to the next.
What more can I say? FANTASTIC!!!

Dr Areti Makrygeorgou
5.0 out of 5 stars Christopher's great escape
Reviewed in the United Kingdom on 12 June 2017
Verified Purchase
At the end my mum was crying. The story was fantastic! I would laic to paiy you 30$ for your stories you are fantastic mister Walliams! Mother's translation: my 6-year old has obviously adored this book! Great story and written in a most captivating way touching persons of any age. My son started dictating the review to me and then he wanted to write it by himself.... i hope one can read it.
Read more
17 people found this helpful
Report abuse

J. Ang
4.0 out of 5 stars Up, Up, and Away!
Reviewed in the United Kingdom on 2 November 2019
Verified Purchase
David Walliams’s series of children’s books keep growing and what I like about them is the focus on familial relationships in the midst of the madcap adventures and irreverent humour. The ones about grandparents are especially moving, and this one is in the vein of “Gangsta Granny”.

A tad more serious and sobering than that story, we have 12-year-old Jack, grappling with his beloved grandpa’s developing dementia. A World War 2 fly ace with the RAF, Grandpa gets increasingly entrenched in the past, believing the war is still going on, and Jack plays along, to help him cope. Together they get into many (mis)adventures, and Jack fights against all obstacles to try to stop his Grandpa from being sent to an old folks’ home.

While the plot may seem a trifle riotous and at times unbelievable, Jack’s love for his Grandpa shines through, and that relationship is central to the entire book. Characterisation is consistent and one of Walliams’s strong points as a writer is how he makes even the minor characters memorable, and you can imagine them being central characters of a spin-off story. A case in point is Raj, the gregarious corner store owner, who has appeared in all of the series so far, and wondrously funny.

D. Higgins
5.0 out of 5 stars My 8 year old love it and I do too!
Reviewed in the United Kingdom on 22 July 2016
Verified Purchase
Great book, nice story and as normal a great example of youngsters having a good relationship with their elders. I love this book and so does my 8 year old. Lots of laughs and we often talk about it when walking to school or eating dinner. One of those books which touches your life without you really noticing it. My son's gran has Alzheimers so he can identify with the Grandpa and understand her a bit better. Thank you David.
Read more
15 people found this helpful
Report abuse

S. MCCARRICK
5.0 out of 5 stars Excellent condition - good reason to use the Warehouse option
Reviewed in the United Kingdom on 10 September 2019
Verified Purchase
I bought this book via the warehouse option- as it was the only manner of getting the book in hardback for my little guy. He loves books- and reads them until they literally fall to bits- so I try to buy hardback/library editions whenever possible. The copy I got from the Amazon Warehouse- was in perfect condition- akin to new, and my little boy is thrilled with it. I'm definitely going to get more books from the warehouse option in future, I'd be nuts not to.
Read more
3 people found this helpful
Report abuse

Dave Bloomer
5.0 out of 5 stars A great read for any age.
Reviewed in the United Kingdom on 5 July 2018
Verified Purchase
I brought this booklet my 8 year old son. He's hit and miss when it comes to reading. So whilst waiting for him to start it I thought I'd give it a go myself. What a cracking story. From the outset the story grabs you and you are transported to the boys world. You feel the love he feels for his Grandpa and it really does move you in certain parts of the story. As a 42 year old man i can heartily recommend this book to anyone looking for a great story. Thumbs up Me Walliams.
Read more
5 people found this helpful
Report abuse
See all reviews
Get FREE delivery with Amazon Prime
Prime members enjoy FREE Delivery and exclusive access to movies, TV shows, music, Kindle e-books, Twitch Prime, and more.
> Get Started
Back to top
Get to Know Us
Make Money with Us
Let Us Help You
And don't forget:
© 1996-2020, Amazon.com, Inc. or its affiliates