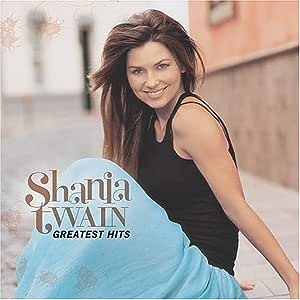 Secure transaction
Your transaction is secure
We work hard to protect your security and privacy. Our payment security system encrypts your information during transmission. We don’t share your credit card details with third-party sellers, and we don’t sell your information to others. Learn more
Details
Ships from
Amazon AU
Sold by
Amazon AU
New (11) from
$6.86 FREE Delivery on first order.

In just over 10 years, Shania Twain has risen to superstar status as a multi-Grammy award winner and over 65 million albums sold worldwide. Shania's first ever Greatest Hits album is packed with 21 tracks featuring 3 brand new songs including the first single "Party For Two" (recorded as two different duets: one with Mark McGrath of Sugar Ray and the other with Country newcomer and rising star Billy Currington). Twain's recently wrapped 2003-2004 UP! Tour reached nearly $80 million overall in ticket sales for North America. The 2004 leg alone brought in over $34 million, making this leg of Twain's tour the top grossing country tour of 2004.

4.7 out of 5 stars
4.7 out of 5
1,747 global ratings
How are ratings calculated?
To calculate the overall star rating and percentage breakdown by star, we don’t use a simple average. Instead, our system considers things like how recent a review is and if the reviewer bought the item on Amazon. It also analyses reviews to verify trustworthiness.

The Queen of Self Published Book Reviews
5.0 out of 5 stars Take a great stroll down memory lane....
Reviewed in Australia on 8 July 2018
Verified Purchase
Loving it and probably driving my neighbours mad! I am suddenly 20 again! Only downside is that some of the songs have been 'reworked', 'reengineered' in the studio and don't quite have the same oomph I remember.
Read more
Helpful
Report abuse

Martin
5.0 out of 5 stars Excellent album for the car
Reviewed in the United Kingdom on 2 January 2014
Verified Purchase
Shania is one of the best female singers around, I have a broad catalogue of music and adding this to my collection is something I would happily admit to anyone. Her style is mostly country and western / pop and we all know the hits she has had, they are all on this album but some of them have little differences to the chart tracks that I remember. It is not big changes and after listening to them a few times I actually prefer the versions on this album but it is worth nothing that there are slight tweaks to the radio edit tracks we would have heard more often.

Of more significance are the tracks I had never listened to before, "Love gets me every time" and "No one needs to know" are my new favourites and the rest are quite good as well. My mum stays about an hours drive from me and I went up to see her yesterday on New years day. I stuck this album on in the car on the way down the road and just let it play. by the time I got halfway home I heard my wife humming along and she asked when I got this one and can she have it on her iPod. Any album my wife likes she decides that she bought it and promptly blags it and this will be no exception. It is a good album with an easy listening style influenced by country and pop which will appeal to everyone.

If you are even a bit of a fan this album is worth buying to have all the hits and a few other tracks together in a collection you can use to while away long journeys and maybe tap your toe to.

At least I have the download on the could player for when the album disappears.
Read more
2 people found this helpful
Report abuse

BS on parade
5.0 out of 5 stars Surprisingly good
Reviewed in the United Kingdom on 27 December 2008
Verified Purchase
About ten years ago I bought her big hit album "Come On Over". I listened to it once and thought it was horrible. Twee and boring. I sold it to a second hand shop and never regretted it for an instant.

I got this Greatest Hits out the library with no real intention of listening to it. I did and I liked it. I know I shouldn't like it, but it overcame my natural resistance to cheesy country-pop amazingly quickly. It's just really, really good, strong, well written and produced pop music. So I've ordered my own copy.

She has only recorded three albums so it covers each album extensively. It features a ludicrous sounding eight tracks from "Come On Over". Which if you don't already have it can only be a good thing. It also has four songs from "Up!", six from "The Woman In Me" and three new songs. Which I'm pretty certain renders her albums completely redundant as it's surely only filler and a few minor gems left on the albums.

Her husband "Mutt" Lange (he produced AC/DC's and Def Lepard's biggest albums) co-wrote and produced all these songs. Now that they have divorced it will be surprising if she will ever recordings anything as good as this ever again as he was clearly of equal importance creatively.
Read more
One person found this helpful
Report abuse

Craig
2.0 out of 5 stars 2 Stars
Reviewed in the United Kingdom on 14 October 2017
Verified Purchase
I bought this for my Sister as a present she was happy with the product it has all the classic song from Shania Twain on here it arrived on time and in good condition
Read more
Report abuse

Amazon Customer
4.0 out of 5 stars good collection
Reviewed in the United Kingdom on 22 September 2020
Verified Purchase
all my favourite song of hers are here plus some I didn't know
Read more
Report abuse

Louise Barnes
5.0 out of 5 stars Great Addition
Reviewed in the United Kingdom on 10 September 2019
Verified Purchase
Bought this for a friends birthday & it went down a treat. Delivery was fast
Read more
Report abuse
See all reviews
Back to top
Get to Know Us
Make Money with Us
Let Us Help You
And don't forget:
© 1996-2021, Amazon.com, Inc. or its affiliates