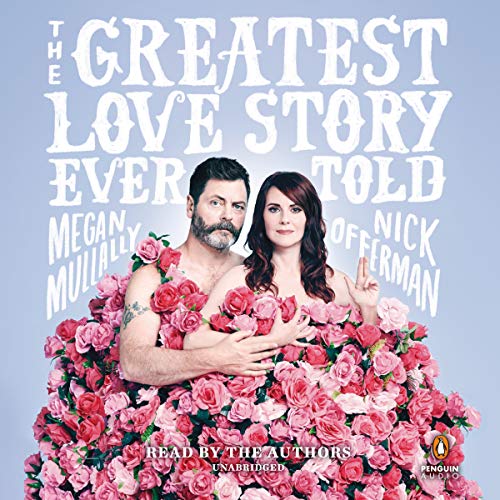 The Greatest Love Story Ever Told: An Oral History

At last, the full story behind Megan Mullally and Nick Offerman's epic romance, including stories, portraits, and the occasional puzzle, all telling the smoldering tale that has fascinated Hollywood for over a decade.

The year: 2000. The setting: Los Angeles. A gorgeous virtuoso of an actress had agreed to star in a random play, and a basement-dwelling scenic carpenter had said he would assay a supporting role in the selfsame pageant. At the first rehearsal, she surveyed her fellow cast members, as one does, determining if any of the men might qualify to provide her with a satisfying fling. Her gaze fell upon the carpenter, and like a bolt of lightning, the thought struck her: No dice. Moving on.

Yet, unbeknownst to our protagonists, Cupid had merely set down his bow and picked up a rocket launcher. Then fired a love rocket (not a euphemism). The players were Megan Mullally and Nick Offerman, and the resulting romance, once it ignited, was... epic. Beyond epic. It resulted in a coupling that has endured to this day; a sizzling, perpetual tryst that has captivated the world with its kindness, athleticism, astonishingly low-brow humor, and true (fire emoji) passion.

How did they do it? They came from completely different families, endured a significant age difference, and were separated by the gulf of several social strata. Megan loved books and art history; Nick loved hammers. But much more than these seemingly unsurpassable obstacles were the values they held in common: respect, decency, the ability to mention genitalia in almost any context, and an abiding obsession with the songs of Tom Waits.

Eighteen years later, they're still very much in love, and have finally decided to reveal the philosophical mountains they have conquered, the lessons they've learned, and the myriad jigsaw puzzles they've completed, in an audiobook. Featuring anecdotes, hijinks, interviews, photos, and a veritable grab bag of tomfoolery, this is not only the intoxicating audiobook that Mullally's and Offerman's fans have been waiting for, it might just hold the solution to the greatest threat facing our modern world: the single life.

Switch between reading the Kindle book & listening to the Audible narration with Whispersync for Voice.
Get the Audible audiobook for the reduced price of $14.99 after you buy the Kindle book.
Last chance - Ends Thursday!
Learn more about membership
By completing your purchase, you agree to Audible’s Conditions Of Use and Privacy Notice.
Sold and delivered by Audible, an Amazon company

4.5 out of 5 stars
4.5 out of 5
544 global ratings
How are ratings calculated?
To calculate the overall star rating and percentage breakdown by star, we don’t use a simple average. Instead, our system considers things like how recent a review is and if the reviewer bought the item on Amazon. It also analyses reviews to verify trustworthiness.

Lauren Doran
3.0 out of 5 stars I should have bought the audiobook
Reviewed in Australia on 27 October 2018
Verified Purchase
Very funny, but hard to read the conversation style at times. I think this would be a 5 star audiobook, but only 3 star written.
Read more
Helpful
Report abuse
See all reviews

binks
5.0 out of 5 stars Cute af
Reviewed in the United Kingdom on 14 March 2019
Verified Purchase
Love these two beautifully cute weirdos and their book is them, their life and their relationship all in one weirdly cute package.
Read more
Report abuse

Nicole
5.0 out of 5 stars Funny, amazing and makes your eyes leak water
Reviewed in the United Kingdom on 28 December 2018
Verified Purchase
I seriously wouldn’t understand anyone not liking this book. These two are couple goals.

Samantha Kinnear
5.0 out of 5 stars One of the best purchases I've made.
Reviewed in the United Kingdom on 21 August 2019
Verified Purchase
Downloaded the audible app just for this book. It was extremely well worth it!
Read more
Report abuse

Pilgore
3.0 out of 5 stars Fun love story but audio would be better
Reviewed in Canada on 2 December 2021
Verified Purchase
I am going to start off by saying that I don’t do audiobooks but after reading this novel, this is one of those books I know would have been better listened to than read.

The majority of the book is dialogue between Nick Offerman and his wife Megan Mullally with individual chapters written by each on their own, photos, quips, etc. They discuss Hollywood, their relationship, sex, improv, family, puzzles, wood, decor and so much more.

One of my favourite Hollywood couples who are not only hilarious but also seem down to earth and real, I really wanted to love their book. The way it is written however, fell flat. Hearing the book read by them would have made this a million times better so again I will highly recommend, from a non audio book person, to GET THE AUDIO BOOK.

An interesting memoir / guide book into life and love. If you’re a fan of either of these actors, I definitely recommend this. In audio form.
Read more
Report abuse
See all reviews