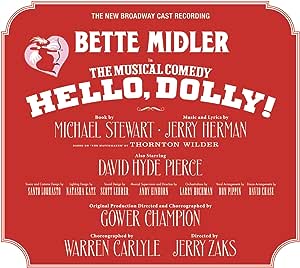 Secure transaction
Your transaction is secure
We work hard to protect your security and privacy. Our payment security system encrypts your information during transmission. We don’t share your credit card details with third-party sellers, and we don’t sell your information to others. Learn more
Details
Ships from
Amazon AU
Sold by
Amazon AU
New (9) from
$19.99 FREE Delivery on first order.

Masterworks Broadway is proud to announce the release of the New Broadway Cast Recording of the most breathlessly anticipated theatrical event of the season, Hello, Dolly starring the legendary Bette Midler. This Broadway revival of Michael Stewart book and Jerry Hermanrsquos music and lyrics masterpiece is directed by fourtime Tony Award winner Jerry Zaks with choreography by Tony Award winner Warren Carlyle and is the first new production of Hello, Dolly to appear on Broadway since it opened more than fifty years ago. The revival will pay tribute to the original work of the legendary directorchoreographer Gower Champion, which has been hailed both then and now as one of the greatest stagings in musical theater history.br br Based on Thornton Wilderrsquos farce The Matchmaker, Hello, Dolly caused an instant sensation when it premiered on Broadway in 1964 starring Carol Channing in the title role. It went on to win a recordshattering ten Tony Awards including Best Musical, Best Original Score, Best Book of a Musical and Best Performance by a Leading Actress in a Musical. The original Broadway cast recording, which includes the wellknown songs ldquoPut On Your Sunday Clothes,rdquo ldquoBefore the Parade Passes Byrdquo and the unforgettable title track, hit the top of the Billboard album chart and, years later, was inducted into the Grammy Hall of Fame.br br Along with Ms. Midler, the cast features Tony and Emmy Award winner David Hyde Pierce, twotime Tony Award nominee Gavin Creel Hair, Thoroughly Modern Millie and Tony Award nominees Kate Baldwin Finianrsquos Rainbow and Jennifer Simard Disaster.nbsp br br The creativedesign team for Hello, Dolly includes threetime Tony Award winner Santo Loquasto scenic and costume design, Tony Award winner Scott Lehrer sound design, Andy Einhorn music direction, Tony Award winner Larry Hochman orchestrations and Tony Award winner Don Pippin vocal arrangements.

4.5 out of 5 stars
4.5 out of 5
394 global ratings
How are ratings calculated?
To calculate the overall star rating and percentage breakdown by star, we don’t use a simple average. Instead, our system considers things like how recent a review is and if the reviewer bought the item on Amazon. It also analyses reviews to verify trustworthiness.

Our Tone
5.0 out of 5 stars Dolly will Never Go Away
Reviewed in the United Kingdom on 24 April 2019
Verified Purchase
When I first heard that Bette Midler was to play Dolly Levi I was intrigued. Unfortunately I didn't get to Broadway to see her but have seen clips on YouTube. I doubt they will ever bring Bette to London to play Dolly but that's life. The cast recording joins my other cast recordings of this memorable Jerry Herman hit and I love it.
Read more
One person found this helpful
Report abuse

Spud
4.0 out of 5 stars Hello Bette !!
Reviewed in the United Kingdom on 1 June 2017
Verified Purchase
A lovely album from the Devine Miss M. Sorry but I could not help comparing the album to Ms Streisand's version and Babs is the outright winner. However I would give my eye teeth to see Bette on Broadway
Read more
3 people found this helpful
Report abuse

Laura Scott
5.0 out of 5 stars Play this
Reviewed in the United Kingdom on 9 August 2020
Verified Purchase
Fab
Read more
One person found this helpful
Report abuse

Richard W White
3.0 out of 5 stars Good recording Poor packaging
Reviewed in the United Kingdom on 3 June 2017
Verified Purchase
A great recording. Love the new Vandergelder song. Such a shame there are no photographs of the show except one of Bette Middler. For those of us who are unlikely to see the show it would have been great to see some. 9/10 for recording. 1/10 for CD presentation.
Read more
2 people found this helpful
Report abuse