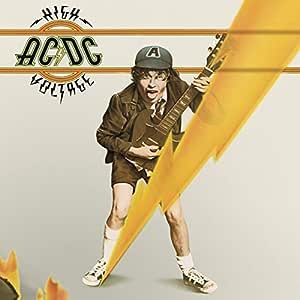 Secure transaction
Your transaction is secure
We work hard to protect your security and privacy. Our payment security system encrypts your information during transmission. We don’t share your credit card details with third-party sellers, and we don’t sell your information to others. Learn more
Details
Ships from
Amazon AU
Sold by
Amazon AU
HIGH VOLTAGE has been added to your Cart
New (3) from
$39.99 + FREE Delivery

4.8 out of 5 stars
4.8 out of 5
2,048 global ratings
How are ratings calculated?
To calculate the overall star rating and percentage breakdown by star, we don’t use a simple average. Instead, our system considers things like how recent a review is and if the reviewer bought the item on Amazon. It also analyses reviews to verify trustworthiness.

CardmanOfficial
5.0 out of 5 stars Excellent album and fast delivery
Reviewed in Australia on 11 May 2020
Verified Purchase
I ordered this album from Amazon and it got here flawlessly in a timely manner, tracking was excellent and the CD plays perfectly. No complaints here.
Read more
Helpful
Report abuse

adsee
3.0 out of 5 stars Not the original release....
Reviewed in Australia on 22 April 2020
Verified Purchase
Wish I could get the original Australian version which is much better.
Read more
Helpful
Report abuse

Boltz
TOP 1000 REVIEWER
5.0 out of 5 stars IT'S A LONG WAY TO THE SHOP (IF YOU WANNA A SAUSAGE ROLL
Reviewed in Australia on 12 March 2021
Verified Purchase
Bagpipes in music over the years..

bikerkate
5.0 out of 5 stars excellent
Reviewed in the United Kingdom on 23 February 2019
Verified Purchase
we saw/heard a brilliant ACDC tribute band in Venice of all places. who would have thought!!

Took me back to High School lurking behind the toilet block for a sneaky cigarette and hearing this band on some ones transistor radio for the first time...several fans were born that day.
I am fortunate to live quite close to Kirriemuir in Scotland where the tribute to Bon Scott stands....Fabulous figure with fabulous detail. Brilliant Album
Read more
3 people found this helpful
Report abuse

DNS
5.0 out of 5 stars Better than Led Zeppellin, Stones and the rest
Reviewed in the United Kingdom on 31 May 2014
Verified Purchase
Classic rock isn't made any more so it's unlikely anyone's going to better the music produced by Bon Scott and AC/DC.
As a newcomer to AC/DC before the past two months I'd only heard the later AC/DC stuff and seen the music videos and I thought them one-dimensional. But I bought Back in Black and I think it's a brilliant rock album, every song a stadium-filling classic.
However, the early music before Scott's death is different gravy. While many (including fans) appear to mock the sleazy and sometimes seemingly one-dimensional lyrics, the use of metaphor is smart and funny and sharp. Here, for exapmple, 'The Jack' is very obvious but very exciting.
The music is just rock. Pure and simple, as it was meant to be. Riff and power-chord heavy, the music has a Marr-Morrissey relationship with the lyrics. But in this case, heavy, dirty, occasionally subtle and always energetic.
'Livewire' is about as energetic as a rock song can get, capturing Scott's outlook and matching it perfectly with the Young brothers' amazing skills.
The two opening tracks set the scene for an album of sheer brilliance. The songs, especially on the ever better Powerage, are as epic as anything a Led Zeppellin produced (if you like that sort of thing, not for me) and as well-crafted as the Stones of Sticky Fingers era.
Read more
7 people found this helpful
Report abuse

Spud
5.0 out of 5 stars Great CD version and totally classic rock album!
Reviewed in the United Kingdom on 1 April 2015
Verified Purchase
Yessss! I found this was the early CD version (mastered by Barry Diament, who has a very good reputation... Google it if you're interested in reading more as some of the work he's done is highly sought after now) by looking on the website Discogs. Later masters of the AC/DC catalogue can sound somewhat harsh compared to original (or early) CD releases and this has plenty of bass and sounds nice and warm to me. Enough of that...suffice to say, you can put this loud without it scalping you!! :D

The album (their European debut) is about as good a place for anyone to start and was indeed one of the first of theirs I bought after a friend got me interested by playing their live If You Want Blood... album over an over (another 100% essential purchase - and maybe even better than this.) Lots of 'live' favourites on here and so many that were destined to become classics. Pure High Voltage Rock 'N' Roll!
Read more
3 people found this helpful
Report abuse

Northangerland
4.0 out of 5 stars GROOVY!
Reviewed in the United Kingdom on 4 November 2017
Verified Purchase
Yeah baby, this is the stuff! Never been much of a fan until recently, but youtubers keep harping on about those halcyon Bon Scott years, so I thought I'd have a peek, and so glad I did!

Those thumping rhythms just stay with you, and bounce you around all day and all night long! Great work. Great music!
Read more
2 people found this helpful
Report abuse

Andy Sweeney
4.0 out of 5 stars Great, hard-rocking debut
Reviewed in the United Kingdom on 12 June 2013
Verified Purchase
I bought this album about five years ago, after buying "Back In Black" and being so impressed that I decided to delve further into the Aussie rockers' back catalogue. "High Voltage", their international début album comprised of highlights from their first two 1975 Australian albums ("High Voltage" and "T.N.T."), lives up to its name, with the album being comprised mainly of high octane, hard-riffing rock classics. There are many AC/DC fans who consider this their finest moment and it's not difficult to understand why as there are more than a handful of excellent tracks. "It's A Long Way To The Top (If You Wanna Rock 'n' Roll)" is a fantastic album opener, resplendent with a great riff and one of the best uses of bagpipes in rock music. "The Jack" is an enjoyable chugging, bluesy number using a card game as a euphemism for VD, "Can I Sit Next To You Girl" reminds me of Status Quo at their seventies hard rock peak and "High Voltage" itself finishes the album with a catchy, up-tempo anthem.

As far as I'm concerned, although many people seem to focus on the raw, powerful vocals of the late Bon Scott, the star of the show is Angus Young. The main appeal of AC/DC, for me, lies with the scintillating solos and the tidy, economical riffs ("Little Lover" is a great example), all held together by the powerful, meaty chords of rhythm guitarist brother, Malcolm. They're a great musical unit altogether though, with Mark Evans' chunky bass-lines and Phil Rudd's relentless drumming providing the solid backbone of the band. If there is one criticism to be made, it's that this music is a little one dimensional, very straight forward "meat and potatoes" rock, but it's executed with such clumsy charm, wit and skill that it's difficult not to enjoy it for what it is, an uncomplicated, likeable, hard blues-rock album that captures the band sounding exactly like they would if you went to see them live. They didn't get much better than this.
Read more
2 people found this helpful
Report abuse
See all reviews
Back to top
Get to Know Us
Make Money with Us
Let Us Help You
And don't forget:
© 1996-2021, Amazon.com, Inc. or its affiliates