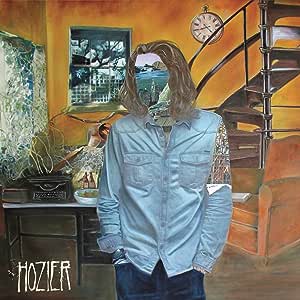 Secure transaction
Your transaction is secure
We work hard to protect your security and privacy. Our payment security system encrypts your information during transmission. We don’t share your credit card details with third-party sellers, and we don’t sell your information to others. Learn more
Details
Ships from
Amazon US
Sold by
Amazon US
New (2) from $34.39

It's not often that you stumble across a songwriter whose lyrics both sound and read like poetry. When those lyrics are set to music that balances burning indignation with lilting tenderness, and delivered in a voice imbued with the spiritual passion and yearning of gospel and the blues, you figure you've chanced upon something special. And so it is with 23-year-old Andrew Hozier-Byrne, an Irish singer-songwriter and multi-instrumentalist from County Wicklow who goes by the name of Hozier.

Hozier releases his self-titled debut album on Columbia Records, following his two EPs Take Me To Church and From Eden. The new album produced by Ron Kirwan (PJ Harvey and Depeche Mode). Hozier will feature the hit single "Take Me To Church" as well as his most recent release "Sedated."

Raised in a musical family, Hozier's childhood and adolescent listening was dominated, he says, "by Chicago blues, Texan blues, Chess Records, Motown, and then I discovered jazz, but more importantly, Delta blues that extraordinarily haunting sound. Skip James, Blind Willie Johnson, people like that. Later, it was Pink Floyd, Nina Simone, Billie Holiday, plus Tom Waits was a huge, huge influence. I was always drawn to singers with something haunting about their voices. The same goes for writers such as James Joyce and Oscar Wilde. You can't define what it is, but it buries itself deep in your soul."

After a string of sold out dates and electrifying performances including TV appearances on The Late Show With David Letterman and The Ellen DeGeneres Show, Hozier will return stateside when he launches his first national headline tour this fall. The tour crisscrosses the country before wrapping up with two shows in New York City.

Tastemakers and critics have wholeheartedly embraced his spirited and soulful sound. He s drawn praise from NPR, New York Magazine, KCRW's Morning Becomes Eclectic, MTV Buzzworthy, Consequence of Sound, and more. Most recently he was featured on NPR's All Things Considered and Tiny Desk Concert.

4.6 out of 5 stars
4.6 out of 5
2,612 global ratings
How are ratings calculated?
To calculate the overall star rating and percentage breakdown by star, we don’t use a simple average. Instead, our system considers things like how recent a review is and if the reviewer bought the item on Amazon. It also analyses reviews to verify trustworthiness.

Ash
5.0 out of 5 stars Amazing!!
Reviewed in Australia on 9 February 2021
Verified Purchase
I LOVE HOZIER!! This album is perfection, the vinyls are in beautiful condition and sound amazing. even came with a CD! 😍
Read more
Helpful
Report abuse
See all reviews

AKEcosse
5.0 out of 5 stars Great new talent. Love it!
Reviewed in the United Kingdom on 20 February 2015
Verified Purchase
I think most people, by now, have heard Take Me to Church and perhaps one or two of these songs, so not much to add about the popular ones. Will say that I enjoy listening to every song on this album, save one that gets skipped on a regular basis.

What an amazing new talent -- I hope he is around for a long time, as his voice seems to be one that would mature well, and the depth of his much indicates that he's got some interesting songs to write in his future. Which is in contrast to a lot of the "popular" music today, in my (aged, at 46) mind, anyway.

My husband -- who sometimes listens to music that makes me hate life -- and my 9-yr-old & 24-yr-old daughters all enjoy this as well, which is not usually the case with the music played around here. The little one rocks out to the more R&B songs, and already knows nearly all of the lyrics to Take Me to Church. Needless to say, it gets a lot of play time in our home.

Now, if he would just play a concert in Scotland that is NOT in Glasgow, please!

R. P. Yordanova-Buran
4.0 out of 5 stars Sad but beautiful
Reviewed in the United Kingdom on 18 February 2015
Verified Purchase
I have listened to this young man almost every day for the past month.The music at times is sad and melancholic but beautiful. The voice is clear but powerful and one can sense the influence of Irish folk music which I like.
The reason for my 4 stars is that you cannot obviously have something coming from Ireland that does not constantly refer to alcohol and religion.
Take the names of the songs - you see Church, Eden, Angels, God; if you listen to the lyrics you hear Lord, Jesus Christ, absolution etc.
Why are the Irish incapable of making a point without imposing their upbringing on the rest of us?
This is music with which you can cry, dance, think and suffer. As long as he makes music that provokes my senses, no matter constant referrals, I will keep buying his CDs.
Read more
3 people found this helpful
Report abuse

Megan
5.0 out of 5 stars Fave album
Reviewed in the United Kingdom on 18 September 2020
Verified Purchase
This is one of my all time fave albums! Hozier has such a wonderful voice, I could listen to this album for hours!
Read more
One person found this helpful
Report abuse

timward
1.0 out of 5 stars Worst quality audio I have ever heard from vinyl
Reviewed in the United Kingdom on 4 January 2019
Verified Purchase
Terrible audio quality for vinyl! Sounds so compressed and distorted vocals almost bootleg quality. Very disappointed. How on earth could the artist or record company think this is acceptable for audiophiles? The disc was also slightly warped. Not impressed at all. Returning for refund. This is disgusting and the record company should know this is not acceptable production. I was so looking forward to hearing Hozier. Sadly not on Vinyl!
Read more
One person found this helpful
Report abuse
See all reviews
Back to top
Get to Know Us
Make Money with Us
Let Us Help You
And don't forget:
© 1996-2021, Amazon.com, Inc. or its affiliates