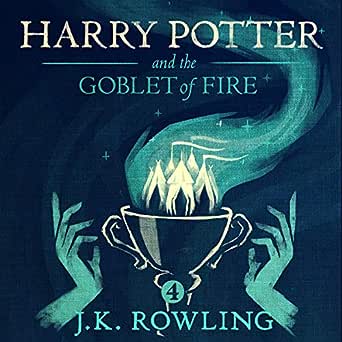 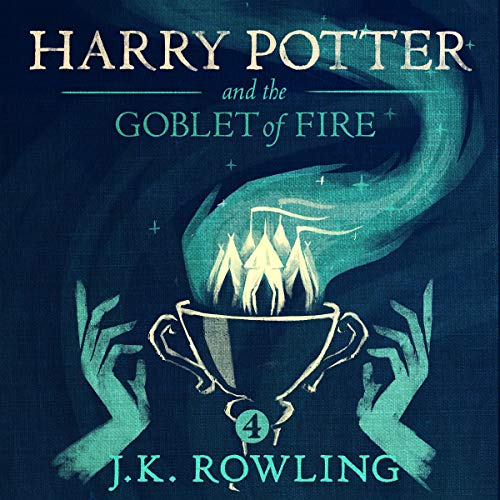 Harry Potter and the Goblet of Fire, Book 4

4.8 out of 5 stars
4.8 out of 5
8,184 global ratings
How are ratings calculated?
To calculate the overall star rating and percentage breakdown by star, we don’t use a simple average. Instead, our system considers things like how recent a review is and if the reviewer bought the item on Amazon. It also analyses reviews to verify trustworthiness.

A person who reads
5.0 out of 5 stars Amazing book!
Reviewed in Australia on 9 October 2020
Verified Purchase
I loved this book, I am currently getting into the Harry Potter series. My best friend recommended this to me and I’m so happy I’m reading it. J.k Rowling’s books are so inspiring and descriptive. I forget time and space is still a thing when I’m reading. I also thoroughly enjoy the movies but it’s sad how they’re shorter then the books, as you can’t fit 600 pages into two hours. I’m currently 100 pages away from finishing and the books amazing so far! ( no spoilers! )
- A person who reads

Amazon Customer
5.0 out of 5 stars Best one yet
Reviewed in Australia on 7 March 2020
Verified Purchase
Love how each book in the series becomes more and more detailed and ‘grown up’ in the way it is written. Highly recommended.
Read more
One person found this helpful
Helpful
Comment Report abuse

Jason Koch
5.0 out of 5 stars Awsome
Reviewed in Australia on 24 August 2016
Verified Purchase
Great book but allmost made my child scream so very carefull choson wordsBut i enjoyd it verry much Sl i think you
Read more
2 people found this helpful
Helpful
Comment Report abuse

Esperanza
5.0 out of 5 stars The face-off
Reviewed in Australia on 27 March 2019
I've read this book more than 18 years ago, so I won't be able to pinpoint all the details. We've just watched the movie version of this piece last night, and my youngest son just couldn't help but complain about how different the movie is from what's really written. I couldn't blame him, but our movie session still went through for the gazillionth time.

The Triwizard Tournament, Professor Moody, Rita Skitter, the Minister of Magic himself, and all graced this piece. Love angles and friend squabbles also added twists and turns. The ending had been heartbreaking, and yet the story continues on so there was still hope. I really looked forward to Book 5 thereafter.

Student of Life
5.0 out of 5 stars Just Magical!
Reviewed in the United Kingdom on 4 June 2018
Verified Purchase
These audio books are amazing! My sister has MS and struggles to read books due to the MS, but she LOVES Harry Potter. When I told her that the films do not have the same details that the books have she was very disappointed that she was missing out and so she started the first book but only managed a few pages over a week. She felt like the extra details were hidden secrets never to be revealed to her . . . Until now! The unabridged cds read by Stephen Fry are AMAZING! All the extra bits from the books are now reachable for my sister, who listens to them when driving. Only problem is that now she keeps highlighting areas where the film is not as thorough as the books! Thank you #StephenFry for doing such a wonderful job bringing all the different characters to life for her.
Read more
40 people found this helpful
Report abuse

Amazon Customer
5.0 out of 5 stars Amazing,gripping got me reading 6 chapters a night
Reviewed in the United Kingdom on 29 February 2020
Verified Purchase
As i said absolutely amazing read got me hooked from start to end. Give a round of an appluase for jk rowling I've read the 1st 2nd 3rd and now finished the 4th can't wait for the 5th.Recommended.Im only 8(don't worry im on my mums kindile)i finshed this book in 2/3 weeks recommend for 7 and above because if your younger there will be words and sentences in the books that you would not understand.Jk rowling is the best author i have ever heard of outstanding.Got me hooked for sure if your going to read jk rowlings books your sure infore a treat get comfy and take a ride to the magical world of hogwarts school of witchcraft and wizardrey.Hope you enjoy this book and the rest of them cause i sure did.If you don't like the storys maybe its bot your kind of style of reading but if im honest my style of reading is Every style of reading.Bye now i hope you found my review helpful i did not mention anything that happens in the story cause that would be a spoiler alert if your buying this book for a child under the age of 7 it will probably be story that will have to wait another year or two for.
:) There is crazy and amazing parts in the story too!!!!

Djilly L.
5.0 out of 5 stars It's getting darker
Reviewed in the United Kingdom on 13 August 2019
Verified Purchase
This fourth of the novel is among my most favourite in the series. There are Death Eaters, Harry faces a returned Voldemort! Professor Moody is not Moody and Rita Skeeter reveals her true nature.. This book sees Harry’s transformation into adulthood in a more serious storyline that perfectly mixes humorous with drama – the book has great character development but a key player will die. The book takes off begins with a tournament when Ron invites Harry to the Quiditch World Cup Final. Ron’s father, through his Ministry of Magic connections has managed to secure seats, but some uninvited guests spoil the event. Later on Hogwarts sees another tournament on its premises; the historic Triwizard Tournament and Harry, despite his age, unexpectedly becomes an contestant.

At the same time he-who-must-not –be-named is slowly growing stronger now that his reliable servant, Wormtail, has returned to him the tone of the books gets progressively darker.

So it’s a great book again, a worthy successor to the magnificent Prisoner of Azkaban, that I very much enjoyed.
We bought the more durable hard bound copy, so the that book can be passed on from one child to the other as they start to develop an interest. However given the Potter-enthusiasm our oldest displays I wonder she will ever part with it.

T.L.F.M
5.0 out of 5 stars great 4th book
Reviewed in the United Kingdom on 11 May 2020
Verified Purchase
Everyone knows a bit about Harry Potter so I will focus here not on the contents of the book but on the quality of this book as a product.
The book is a present for my child that loves Harry Potter and has seen all the films, but now when she is older (10 years old) she wants to read all the books too. I was between buying a full set with the box that is more expensive or buying separate books from this company - cheaper option especially that this book came in an offer.
I have ordered book 1 and 2 to check if it is worth it.
I am very happy to say that it is and now I have all 7 books for £30.
The set looks great and I am very happy with my buy
The books are:
- good size that can be held by a child or adult for a long time
- weight - this version has a paper cover and light weight pages so the book is on the lighter side and good for kids
- paper quality and the colour are good. The books that I bought had all their pages, the bonding is holding them in and does not feel like they will fall out any time soon
- size and spaces between the words is very comfortable for my eyes and I can read it without glasses
- illustration that is on the cover is very nice and definitely in the Harry Potter style
- very good delivery time and I can have all 7 books for £30 with all the promotions I have got on them:)

I hope you will like my review, if you found it useful please hit ‘Helpful’. It will make my day:)XX

2 people found this helpful
Report abuse
See all reviews
Get FREE delivery with Amazon Prime
Prime members enjoy FREE Delivery and exclusive access to movies, TV shows, music, Kindle e-books, Twitch Prime, and more.
> Get Started
Back to top
Get to Know Us
Make Money with Us
Let Us Help You
And don't forget:
© 1996-2020, Amazon.com, Inc. or its affiliates