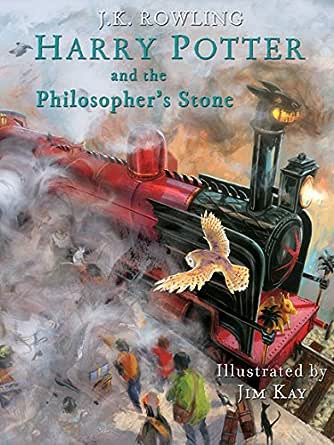 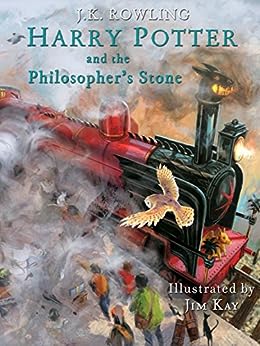 This book can be read on any device, including Kindle E-readers. It may include art, animation, or video features that can be viewed on certain Fire tablets and the free Kindle app for iOS and Android. You can switch features on or off at any time. Learn more  |
Read more Read less

A wonderful first novel. Much like Roald Dahl, J. K. Rowling has a gift for keeping the emotions, fears, and triumphs of her characters on a human scale, even while the supernatural is popping out all over. The book is full of wonderful, sly humor [and] the characters are impressively three-dimensional (occasionally, four-dimensional!) and move along seamlessly through the narrative. Harry Potter and the Sorcerer's Stone is as funny, moving and impressive as the story behind its writing. Like Harry Potter, [J. K. Rowling] has wizardry inside, and has soared beyond her modest Muggle surroundings to achieve something quite special. -- The New York Times Book Review

A charming, imaginative, magical confection of a novel. . . . A glorious debut, a book of wonderful comic pleasures and dizzying imaginative flights. There is no cause to doubt Rowling's abilities and promise, and every reason to expect great things, truly great things, from her in the future. -- The Boston Sunday Globe

You don't have to be a wizard or a kid to appreciate the spell cast by Harry Potter. -- USA Today

The story delights and the writing gives you goosebumps, the good kind. -- Chicago Tribune

*Readers are in for a delightful romp with this award-winning debut from a British author who dances in the footsteps of P. L. Travers and Roald Dahl. Rowling leaves the door wide open for a sequel; bedazzled readers will surely clamor for one. -- Publishers Weekly, starred review --This text refers to the hardcover edition.

J. K. Rowling is the author of the beloved, bestselling, record-breaking Harry Potter series. She started writing the series during a delayed Manchester to London King's Cross train journey, and during the next five years, outlined the plots for each book and began writing the first novel. Harry Potter and the Sorcerer's Stone was published in the United States by Arthur A. Levine Books in 1998, and the series concluded nearly ten years later with Harry Potter and the Deathly Hallows, published in 2007. J. K. Rowling is the recipient of numerous awards and honorary degrees including an OBE for services to children's literature, France's Legion d'Honneur, and the Hans Christian Andersen Literature Award. She supports a wide number of causes through her charitable trust Volant, and is the founder of Lumos, a charity working to transform the lives of disadvantaged children. J. K. Rowling lives in Edinburgh with her husband and three children. Jim Kay won the Kate Greenaway Medal in 2012 for his illustrations in A Monster Calls by Patrick Ness. Jim studied illustration at the University of Westminster and since graduating has worked in the Archives of Tate Britain and the Royal Botanic Gardens at Kew. Jim has produced concept work for television and contributed to a group exhibition at the Victoria and Albert Museum in London. He now lives and works in Northamptonshire, England, with his partner and a rescued greyhound.
--This text refers to the hardcover edition.
Read more

Be transported into the story with art, animation, or video features that complement the narrative and are available at no extra cost.

Read on Any Device
Read on any device, just like other Kindle books.

Read on Any Device
May be included and is available at no extra cost. View on any
Art, animation, or video features can be viewed on the following:

(Note: To experience these features, please update your Kindle app to the latest version.)
compatible device.

Two Ways to Read
Experience this book with additional features—or switch them off at any time.

4.9 out of 5 stars
4.9 out of 5
9,811 global ratings
How are ratings calculated?
To calculate the overall star rating and percentage breakdown by star, we don’t use a simple average. Instead, our system considers things like how recent a review is and if the reviewer bought the item on Amazon. It also analyses reviews to verify trustworthiness.

Greggorio!
TOP 100 REVIEWER
5.0 out of 5 stars BUY IT BUY IT BUY IT!!!
Reviewed in Australia on 12 November 2019
Verified Purchase
A Wonderful addition to Potter folklore and undoubtedly the most stunning way to read book one if you want to relax and not concentrate quite so much as you do. The illustrations really are spectacular, its best to read on a table that is as big as you can afford, but we cant all have what we want, just ask Ron Weasley lol. But its certainly a bargain at this price. We all know the plot and characters and story right now, so this version and this review is really only to rate the electronic version of this amazing illustrated edition. So my final comment is BUY IT BUY IT BUY IT!!!
Read more
Helpful
Comment Report abuse

Oz Pom
5.0 out of 5 stars This version is great for reading to grandkids.
Reviewed in Australia on 7 June 2020
Verified Purchase
Eighth reading of HP1 but my first with this illustrated "motion" edition. Grandies now appreciating Harry Potter so a few years of re-reading ahead.
This animated version is an absolute bargain. Highly recommended addition to your HP collection even if you already have the illustrated book, like us.

Ebony Marie D'Agostino
5.0 out of 5 stars From Ebony, the world's best Grifflepuff
Reviewed in Australia on 5 August 2019
Verified Purchase
This book was really good! It was my first time reading Harry Potter, and it gave me a really good impression on the series! I will definitely take initiative and watch the movies, even buy the other books! Overall, it is definitely a five star rating! ★★★★★
¯ ¯ ¯ ¯ ¯

Katiemouse
5.0 out of 5 stars Great book
Reviewed in Australia on 22 May 2020
Verified Purchase
A great way to relive your favourite kids book with your young kid. Excited to read through it with my daughter.
Read more
Helpful
Comment Report abuse

Kimberley
5.0 out of 5 stars AMAZING!!
Reviewed in Australia on 5 October 2018
Verified Purchase
This book is brilliant!

The moving pictures add an extra element of magic to the story - you could almost believe you bought the book itself in Diagon Alley.

Well worth purchasing even if you already have the hard-copy.

Amazon Customer
5.0 out of 5 stars A must-have for every HP fan
Reviewed in Australia on 8 June 2020
Verified Purchase
Love, love, love Jim Kay's illustrations! And the animations make the story come to life. Hope they'll do the same with every illustrated edition!
Read more
Helpful
Comment Report abuse

DM
5.0 out of 5 stars Excellent
Reviewed in Australia on 15 April 2019
Verified Purchase
Great book for all agesz
Would definitely recommmend it.
The first ih the series which gets better and better. Read it

Lorraine
5.0 out of 5 stars Illustrated version great
Reviewed in Australia on 10 September 2020
Verified Purchase
Illustrations are great for younger children not yet able to read the book themselves. Good value
Read more
Helpful
Comment Report abuse
See all reviews

Jane
5.0 out of 5 stars Beautiful
Reviewed in the United Kingdom on 15 January 2018
Verified Purchase
I love Harry potter and these books are amazing for anyone who is a fan as they're great to have in a collection. The book is so heavy and illustrations make it new and interesting. Something I bought thinking it will be great for if I have children to pass on. I hope I can get the whole collection when the illustrator is done with them. Totally worth the money, so pleased with my purchase.
Read more

Saqib Amin
5.0 out of 5 stars Do and Do not to note before you buy.
Reviewed in India on 31 January 2019
Verified Purchase
Awesome book best ever book i have ever seen in such printing and design.
Original Quality printed edition of BLOOMBURY which i got from seller named "Book Selection Centre" Best seller i seen on Amazon.

Please note do not buy from seller named "Inetrade India" they are giving fake, ultra low quality books and wrong books. I suffered for a month because of them.

Cook
5.0 out of 5 stars Fabulous for introducing those a bit wee for the novels
Reviewed in the United Kingdom on 2 July 2019
Verified Purchase
This is a really lovely edition from the Harry Potter series. My 5 year old was forever asking me questions about Harry Potter but I didn’t want to sit her down in front of the film- it’s a bit scary - and I’d really wanted her to read/ listen to the book. It was so long since I’d read it, I was struggling to answer her questions. It would be impossible to get a 5 year old to sit through a picture-less novel - certainly mine wouldn’t!! I’m so glad I found this illustrated version. The pictures keep her interested and help her imagination. We’re only on Chapter 5 so far, but we’re both excited to keep coming back to it. We do a recap of every chapter after we finish it and when we sit down to the book anew. She’s loving it and I’m really enjoying re-reading it all these years later. Highly recommend.
Read more
16 people found this helpful
Report abuse

Lucy G
5.0 out of 5 stars Magical!
Reviewed in the United Kingdom on 24 September 2017
Verified Purchase
I debated with myself for a long time over whether I 'needed' this - after all I already own the original book and the printed illustrated book so why did I need this as well?

Well I caved... and I'm glad I did! It won't work on my Kindle Paperwhite which is a shame, but it works nicely on the Kindle App on my Tablet & Phone. It really is extra magical to read when the beautiful illustrations unexpectedly move. The movement is often subtle so you almost doubt you've seen it move & have to look again.

I'm a huge Harry Potter fan & love that extra ways of making the books more magical keep being developed. I'm looking forward to the next books in this format.

Courtney
3.0 out of 5 stars Great book to add to collection but if you want more for your money buy the hardback book
Reviewed in the United Kingdom on 15 November 2018
Verified Purchase
When I saw this advertised I got really excited seeing as it's a different cover but it's really just a paperback version of the illustrated edition by Jim Kay but just with less pictures basically. I'm glad I have it as I am collecting every single Harry Potter book I can fine but as far as reading or looking at the paintings I'd say definitely buy the hardback one, it features all his work rather than just a select few.
Read more
14 people found this helpful
Report abuse
See all reviews
Get FREE delivery with Amazon Prime
Prime members enjoy FREE Delivery and exclusive access to movies, TV shows, music, Kindle e-books, Twitch Prime, and more.
> Get Started
Back to top
Get to Know Us
Make Money with Us
Let Us Help You
And don't forget:
© 1996-2020, Amazon.com, Inc. or its affiliates