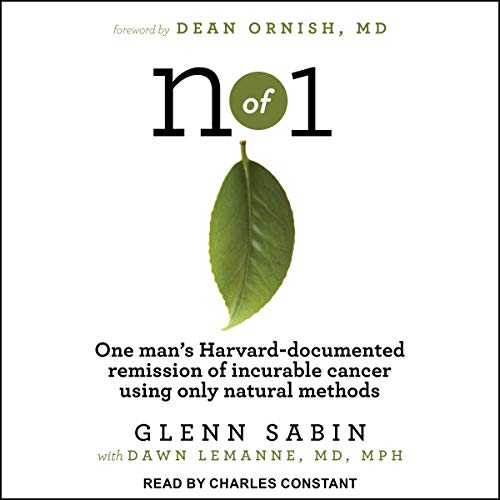 N of 1: One Man's Harvard-Documented Remission of Incurable Cancer Using Only Natural Methods

4.6 out of 5 stars
4.6 out of 5
99 global ratings
How are ratings calculated?
To calculate the overall star rating and percentage breakdown by star, we don’t use a simple average. Instead, our system considers things like how recent a review is and if the reviewer bought the item on Amazon. It also analyses reviews to verify trustworthiness.

Amazon Customer
5.0 out of 5 stars Great for anyone with cancer
Reviewed in Australia on 1 September 2019
Verified Purchase
Inspiring and interesting read with down to earth narrative - really enjoyed this book and it helped me through a down period on the cancer journey.
Read more
Helpful
Report abuse
See all reviews

Bryan Sentes
4.0 out of 5 stars A Valuable and Informative Personal Story of One Man's Dealing with His Chronic Lymphocytic Leukemia
Reviewed in Canada on 21 June 2018
Verified Purchase
Glenn Sabin's N of 1 is an important, informed, and, most importantly, evidence-based account of one man's experience of finding his own way to treating his Chronic Lymphocytic Leukemia.

The book is written in short, very easy to read chapters, and the whole story can be quickly completed.

Sabin's book combines his personal story--from diagnosis, through various, sometimes harrowing, complications, to his achieving "minimal residual disease negative" status, or, essentially, being cured--and his learning curve, as he explored both mainstream and integrative therapies. This latter dimension is valuable, because of its being firmly founded in evidence-based approaches, unlike the sad plethora of quack cures that can plague a patient's sincere search for the best possible outcome.

Although in terms of Sabin's particular cancer the book is little dated, the story and its morale will prove valuable to CLL patients as well as those afflicted with other cancers.

Gene Pisasale
5.0 out of 5 stars good health and greater understanding of a condition called chronic ...
Reviewed in the United States on 2 October 2017
Verified Purchase
Glenn Sabin's journey in life has been a tortuous one- but it has brought him to a place of peace, good health and greater understanding of a condition called chronic lymphocytic leukemia (CLL). This condition is considered a serious disease, yet in the overall scheme of leukemias and types of cancer, it is much lower on the scale in terms of life-threatening immediate danger than many other diseases. It is one that often allows patients to live fairly long and even relatively normal lives, although in many (perhaps most) cases, patients do experience serious complications. The understanding and treatment of this condition has catapulted over the last 25 years- from the early 1990s when Glenn was diagnosed with it. In the past 5-10 years, numerous drugs, monoclonal antibodies and hormone therapies have generated an array of different and effective treatments for CLL. Glenn was given the choice to try some of these treatments, including forms of chemotherapy- but he bravely chose to go a different course, focusing on good diet, regular exercise, a strict regimen of vitamins and supplements, filtered water, and mind-body interaction through meditation and related activities. Despite having a few periods of flare-ups when his condition appeared grave, Glenn fought on, sticking to his regimen and avoiding chemotherapy, even though highly trained and experienced doctors at some of the nation's most respected hospitals and cancer institutes told him he should consider the "standard" therapies.
Glenn not only survived- but after years of sticking to his preferred regimen- 26 years as of 2017- he is healthy, strong and completely free of leukemia, as detailed in his blood tests and related lab work, totally shocking his physicians. Many well respected doctors have called his case remarkable- and indeed it is in many ways. First, it shows that anyone diagnosed with a serious, potentially life-threatening disease should NOT lose hope, but should instead seek out a wide variety of accurate, up to date information about their condition as well as opinions from well respected physicians and researchers noted in their field. Secondly, Glenn shows in his book that even the "experts" don't always have the right answers- and for anyone with a serious disease to be highly skeptical and seek out additional information and opinions. Thirdly, Glenn proves that a positive mind-set, a very healthy lifestyle and strict keeping to a documented regimen- including so-called nutraceuticals, vitamins and low fat, low sugar healthy foods CAN make a BIG difference in your health and outlook going forward with a serious condition like CLL. Tens of thousands of people are diagnosed with CLL every year, yet I suspect few of them approach it with the clearness of mind and strict dedication that Glenn did. That may have made all the difference. Today as of October 1, 2017, Glenn is healthy and free of CLL. He repeatedly notes in his book that his approach may not be appropriate for everyone and to ALWAYS seek the advice of reputable physicians and researchers in your condition- avoiding a "go it alone" approach which might be highly risky.
Glenn took many risks, as he was faced with a serious disease; he felt he had to take them to achive a better result than what was projected by nearly all of his doctors. Including and utilizing the advice of well known and respected nutritionists and pharmacists was key in his victory against this disease. Glenn's journey is an inspiring one for any person faced with a serious illness. Believe in yourself and in your own body's ability to help fight disease. Seek out a wide range of up to date, accurate and relevant information pertinent to your condition. Keep an open mind with respect to "holistic" and alternative therapies- they just might offer a good option to pursue. In Glenn's case, these alternatives appear to have worked dramatically well... and for that, I salute him in his courage, dedication and honesty in sharing his story with the world, Thank you, Glenn. God bless you...and may He give you many, many more years of good health, peace and serenity.
Read more
20 people found this helpful
Report abuse

D Balder
5.0 out of 5 stars Challenging the medical model
Reviewed in the United States on 24 November 2018
Verified Purchase
“n of 1” is a must read for anyone seeking to create their health and well-being, whether or not they have cancer. Glenn Sabin’s ongoing journey to treat himself with the assistance of an array of health providers challenges the medical model.

When it comes to understanding humans, the helpful scientific method is not, as it turns out, the same as the science used for understanding the stars and cosmos. Doctors, however, look for cause and effect. While this has contributed to the advancement of pharmaceuticals and medical treatment, it has not been effective for treating the total person. In fact, cause and effect is limited, sometimes with chronic and potentially fatal side effects.

As someone with multiple myeloma (a cancer of the bone marrow), a cancer that is treatable and incurable, I found Glenn’s book eye opening. Glenn pursued his treatment as a scientist and co-creator of his health without data (because it was unavailable) and a cause and effect modality (because it disregards the subjective but critical and non-quantifiable factors). Glenn insisted and fought to be included in and lead his care. Did that play a role in his cancer’s remission and possible cure? We don’t know. We want to know but can’t. Glenn made no causal claim as he does not know either. This makes his story both radical and ordinary. It makes his story universal and personal. His journey is an important contribution to medicine, science and, most importantly, the power of people to co-create their health and well-being.
Read more
16 people found this helpful
Report abuse
See all reviews
Back to top
Get to Know Us
Make Money with Us
Let Us Help You
And don't forget:
© 1996-2021, Amazon.com, Inc. or its affiliates