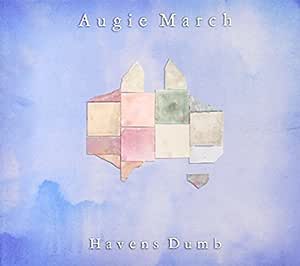 Secure transaction
Your transaction is secure
We work hard to protect your security and privacy. Our payment security system encrypts your information during transmission. We don’t share your credit card details with third-party sellers, and we don’t sell your information to others. Learn more
Details
Ships from
Amazon AU
Sold by
Amazon AU
New (7) from
$11.56 FREE Delivery on first order.

The longawaited fifth studio album from Augie March is now complete and will be released on October 3 this year. It is titled 'Havens Dumb' and will be released on Dark Satanic Records via Caroline, on all formats. It was produced by Augie March singersongwriter Glenn Richards, recorded in various studios in Tasmania and Victoria, and mostly mixed by Paul McKercher. After the band went 'on hiatus' in 2009, Glenn Richards opted to move from Melbourne to Hobart seeking lower rent and the chance to develop a working studio. This he did, building a soundproof bunker out of a small cave carved out of the wall of an underground garage in Goulburn Street, West Hobart. He began to write and demo songs for something, anything, next. Inside of a year he'd been given the choice by his negativelygeared landlord to either eliminate the abandoned sibling kittens now in his care or be evicted. In his new rental lodging further up the mountain there was a large garden and a bungalow, which was duly converted to a more ambitious studio and sometimes speakeasy. Communication amongst Glenn, Adam, Edmondo, Dave and Kiernan flickered to life. The idea of a new album was floated, one made in their own time, under their own steam an album that was just made until it was made.

4.0 out of 5 stars
4 out of 5
4 global ratings
How are ratings calculated?
To calculate the overall star rating and percentage breakdown by star, we don’t use a simple average. Instead, our system considers things like how recent a review is and if the reviewer bought the item on Amazon. It also analyses reviews to verify trustworthiness.

Mr S.
3.0 out of 5 stars Three Stars
Reviewed in the United Kingdom on 31 December 2015
Verified Purchase
Not as good as earlier albums
Read more
Report abuse

helen kennedy
5.0 out of 5 stars Five Stars
Reviewed in the United States on 20 February 2015
Verified Purchase
the album is wonderful but unfortunately it took 3 months to arrive
Read more
Report abuse
See all reviews
Back to top
Get to Know Us
Make Money with Us
Let Us Help You
And don't forget:
© 1996-2021, Amazon.com, Inc. or its affiliates