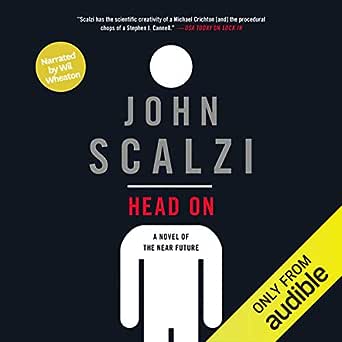 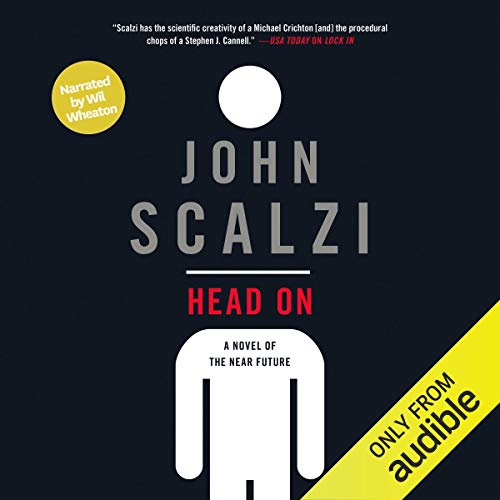 Head On (Narrated by Wil Wheaton)

4.3 out of 5 stars
4.3 out of 5
99 global ratings
How are ratings calculated?
To calculate the overall star rating and percentage breakdown by star, we don’t use a simple average. Instead, our system considers things like how recent a review is and if the reviewer bought the item on Amazon. It also analyses reviews to verify trustworthiness.

Holly "Ragdoll Reads" Hodson
5.0 out of 5 stars Capitalism, pro sports and disabilities don't mix!
Reviewed in the United Kingdom on 6 June 2018
Verified Purchase
What I liked…

I think my favourite part of this book was that a lot of the social and ethical themes from the first book are explored in greater deal in Head On. One such example from the first book was the idea that the things that made life liveable for Haden's would be taken over by non-Haden's in the name of profit. Haden's make up around 1% of the population, and after Abrams-Kettering (a bill that removed financial support for Haden's sufferers) the markets for Hadens-related products was set to shrink. In Lock In, preparations were being made to chase the non-Haden market by paving the way for non-Hadens to use threeps (the android bodies Haden's use to have a presence in the physical world. In 'Head On', this theme is explored further, and we see able-bodied protesters, whining that the Hilketa leagues only feature Haden players. Drawing obvious parallels to the sort of nonsense protests we see in the real world about 'safe' spaces for marginalised and minority groups. It is elements like this that demonstrate both a good understand of disability and minority issues, and it helps make the world both real and engaging.

We also learn a lot more about the world as seen through the eyes of Haden's. Scalzi has created a really rich culture for Hadens, and we learn a good deal about the etiquette, social norms and the role of the Agora (an 'online' world for Hadens).

Our two main characters, Shane and Vann were the leads in 'Lock In', and they continue to be interesting individuals with an entertaining partnership. After a year of working together, Shane and Vann have created an effective working relationship which often involves some delightful good cop / bad cop interrogations that are enjoyable to read and often very amusing to boot. In addition we see the return of the supporting characters in the form of Shane's housemates, who play a bigger role in this book than in 'Lock In'.

The plot summary makes it sound like this book is heavily centred around the sport of Hilketa - and it is - but this is not a sci-fi sports novel. I was quite worried when I bought this book that it might be mostly about sport...fantastic science fiction sport, but sport none the less, and that wasn't of great appeal to me. Fortunately this wasn't the case. It is first and foremost a crime / conspiracy novel, which happens to involve the sport. We do learn quite a bit about how the sport works but it isn't the primary focus.

Finally, I love the fact that Scalzi made sure to provide quick explanations of the key terms and themes as they arose. If you had read 'Lock In' recently then you might consider them superfluous, but it did mean that if you wanted to, you could read 'Head On' without having read 'Lock In' first, which I thought was pretty neat.

I can't exactly put my finger on anything specific that I didn't like - I just know I enjoyed the first book more (and I read them back to back). Actually that's not quite true - for some reason, Scalzi switched from using the word "Harness" to describe the apparatus that held a Hadens physical body, and started using "Creche" instead. I don't know why, and it's not exactly a problem, I just found it a bit odd.

I don't think there was anything wrong with the book - in fact a lot of parts I thought were much better, it just overall felt a little less than its counterpart somehow. I couldn't decide if I should give the book a 4.5 or 5 button rating - I eventually decided on 5 because it seemed unreasonably to give a book I enjoyed so much a lower rating just because of a vague sense that the first one might have been better.

This book is an excellent sequel to 'Lock In' and an excellent story in its own right. Scalzi has created rich and full worlds, chock full of detail and careful thought - such careful world-craft deserves high praise.

The book doesn't just follow a simple murder or conspiracy track, it also tackles a whole bunch of social and ethical issues which made the whole experience a lot more enjoyable for me.

I would recommend this book to anyone who likes solid science fiction, also to any crime fans who don't mind the futuristic setting.
Read more
3 people found this helpful
Report abuse

Mark Chisholm
5.0 out of 5 stars Scalzi Applies Sci-fi to Crime
Reviewed in the United Kingdom on 29 June 2018
Verified Purchase
The first thing that should be said is that John Scalzi can write well and fundamentally this is the most important aspect of any book. The story can be superb but if the author can't put together a grammatically correct and well written set of words, then it falls down at the first hurdle.

Thankfully, as in his other books Scalzi has maintained his engaging and accessible writing that allows you to enjoy an interestingly put together story that could easily be a great modern crime story if the light touch of science fiction was removed.

However, what Scalzi has done is use science fiction to add another facet to what is ostensibly a murder mystery in such a clever way one cannot but be impressed with his imagination. And whilst science fiction it's done in such a light manner than you can genuinely buy into it as being entirely plausible. In fact one suspects that elements of the idea of paralyzed people using robots as a means to implant their conscious so as to live an almost normal live is within the bounds of possibility even today.

Anyway, the story is based upon an FBI agent who suffers from 'Haydens' which has caused many people to end up paralysed and thus driven the need to develop robots able to be the carrier of the sufferer's 'person.' He is investigating the death of a game player who plays in a sport that allows personality controlled robots to compete, aiming to take the heads of their opponents. Of course the idea is that no-one dies...until they do.

The story romps along at a decent pace and the crime is convoluted and sucks you in.

Susan Stepney
4.0 out of 5 stars the trademark Scalzi snarky snappy dialog
Reviewed in the United Kingdom on 2 January 2019
Verified Purchase
Hilketa is a violent sport, where the goal is to rip the head off the opposing team’s “goat” player. Not that violent, though: the players are all Hadens, controlling robot bodies. There is some feedback to give the players a little pain, just to keep them motivated. Nothing too extreme though. Nothing that would cause damage. Certainly nothing that would kill. So when a player drops dead in a game, and people start acting weird, Haden FBI Agent Chris Shane investigates.

This is the second Chris Shane tale, and it keeps up the standard of the first. The possibilities and politics of Haden robotic bodies are central to the plot: they aren’t just a vehicle to allow Chris to jump between bodies at will. It’s fortunate that Chris has wealthy and influential parents, as this does help unstick some otherwise sticky situations. This has the trademark Scalzi snarky snappy dialog, bags of action, and a cat.

I’m looking forward to seeing how the world-building develops in future stories, as non-Hadens also start to use the robot bodies.
Read more
Report abuse

Married to she who must be obeyed
5.0 out of 5 stars Question: Why isnt this a sci fi film?
Reviewed in the United Kingdom on 6 August 2020
Verified Purchase
second book about the FBI investigations of our characters. One who is in fact a robot controlled by a living person who just happens to have a disease that makes them live in a permanent state of coma, with only their brain active. John Scalzi has written a first class detective novel. I love the way he just draws you into the lives of the characters, gently dropping details of their history into the plot so you get to feel drawn into their personal lives as well. The plot is 'earth based' but future possible. I cant recommend this highly enough
Read more
Report abuse

A. Foster
4.0 out of 5 stars An interesting read. Not up there with Fuzzy Nation though.
Reviewed in the United Kingdom on 22 September 2018
Verified Purchase
Up front, I rate Scalzi as one of the best of the current SciFi writers. Big ideas and great concepts.

What this feels like to me is that Scalzi is looking to show he can write all types of SciFi. Big space opera's, well-rounded characters and in this case a full-on detective story. (There are shades of Asimov's Elijah Baley)

I enjoyed the book and the Haden concept is a great scenario or device providing all sorts of opportunities to explore living life through a 1st person device. (I won't say more) So if you like Scalzi, get it, If you liked Asimov's detective stories, get it.

Four stars because it didn't hang together as well or feel as complete for me as some of his other work.
Read more
Report abuse
See all reviews
Back to top
Get to Know Us
Make Money with Us
Let Us Help You
And don't forget:
© 1996-2021, Amazon.com, Inc. or its affiliates