Skip to main content
Hebrides and over 1.5 million other books are available for Amazon Kindle . Learn more
Share 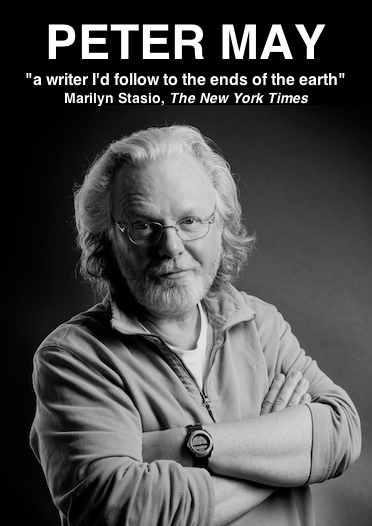 Page 1 of 1 Start overPage 1 of 1
Previous page
Next page
Start reading Hebrides on your Kindle in under a minute.

Peter May created three prime-time British drama series including Machair, set on the isle of Lewis. In addition to the Lewis trilogy, he has written the six China thrillers and five Enzo novels. He lives in France. David Wilson worked with the BBC for twenty years and was the production designer for Machair. He has published a photographic book on the Hebrides, Changing Light. He lives on Lewis.

Peter May was born and raised in Scotland. He was an award-winning journalist at the age of twenty-one and a published novelist at twenty-six. When his first book was adapted as a major drama series for the BCC, he quit journalism and during the high-octane fifteen years that followed, became one of Scotland's most successful television dramatists. He created three prime-time drama series, presided over two of the highest-rated serials in his homeland as script editor and producer, and worked on more than 1,000 episodes of ratings-topping drama before deciding to leave television to return to his first love, writing novels.He has won several literature awards in France, received the USA's Barry Award for The Blackhouse, the first in his internationally bestselling Lewis Trilogy; and in 2014 was awarded the ITV Specsavers Crime Thriller Book Club Best Read of the Year award for Entry Island. Peter now lives in South-West France with his wife, writer Janice Hally.
Read more

4.8 out of 5 stars
4.8 out of 5
423 global ratings
How are ratings calculated?
To calculate the overall star rating and percentage breakdown by star, we don’t use a simple average. Instead, our system considers things like how recent a review is and if the reviewer bought the item on Amazon. It also analyses reviews to verify trustworthiness.

Jack Harrison
5.0 out of 5 stars The Ultimate Guide to May's Hebrides Trilogy.
Reviewed in the United Kingdom on 24 September 2019
Verified Purchase
I would like to start by agreeing this IS a perfect book to accompany May's Lewis Trilogy. And this becomes obvious within the first minute

As I sit with my own copy (which arrived this morning), my first thought is what a beautiful thing it is. To hold the book in my hands is a complete visual feast. Before actually reading from cover to cover, I often like to spend time looking at the excellent photos - most provide infinite inspiration for Artists and Poets. I was drawn to the photos on pages 48 and 49. On the left, waves assaulting the shore of Bru.To the right- the forbidding clouds of a gathering dominate Galson. Each of these photos, provide clues to the fact that weather and the other natural elements form and shape the lives and environments of generations of Island people - The Hebrideans and their culture.

And all of that is clearly found within the pages of Peter May's Trilogy. So again, this is a perfect partner to go with them. (I also used Google Maps and it's clever features to follow the various scenes [and journeys] found in the Trilogy). In my own case, I began with Book 3 'Chessman', because as a Chess player, I'm also aware of the ancient Chess pieces found on a beach. I also have a resin set based upon the originals.
I'm still not disappointed for starting at Book 3.

On seeing the house used at Fin's Aunt's home, I recalled perhaps the funniest part, when both take Whistler to his own Blackhouse, where the Aunt confronts Whistler's drunken Yeti of a father. (Chapter 14? of Chessmen).

Peter May's 'Hebrides', is a wonderful book to own and to look at, whether one goes cover to cover, or just dips in and out randomly. The front cover draws us in, to see more; to look inside the building and imagine it as someone's home. Or to look to the right and try to see the view out to sea. I would recommend this to anyone.
Jack D. Harrison.
Read more
6 people found this helpful
Report abuse

Amazon Customer
5.0 out of 5 stars Simply stunning
Reviewed in the United Kingdom on 8 October 2013
Verified Purchase
This is a stunning, stunning book which perfectly accompanies the Blackhouse Trilogy.

Beautiful photographs, and a wonderful narrative from the author illustrating the reasons for basing key sites on these photo's/actual houses and places, together with occasional extracts from the book so the reader can be transported to the location and the fictional book prose simultaneously.

If you've never read the series (do!) but the book works wonderfully well as a standalone photo guide to the Hebrides.

It's just a wonderful footnote for the series - treat yourself in hardback as it will become very well read.
Read more
32 people found this helpful
Report abuse

nevasa67
5.0 out of 5 stars Beautiful and evocative companion to the Trilogy
Reviewed in the United Kingdom on 14 May 2017
Verified Purchase
Superb and varied, these evocative photographs are arranged chronologically to follow the sequences of the chapters of the whole Trilogy. Relevant passages from the text accompany many of the pictures, many reflecting the richness of the author's background descriptions for key scenes. Peter May must have struggled at times not to give too much information away re the action of the novels, but the combination of the the latter and this book create a unified whole - an immensely satisfying reading experience. I once visited parts of the Isle of Lewis, the Flannan Islands and St Kilda as a student back in 1967 and these books have inspired me to make another journey - nay, pilgrimage! - to see the sites of the action. As a keen photographer myself I found the technical notes by the book's photographer, Daniel Wilson, re the cameras used for certain images, to be interesting and informative. Peter May has really thought of everything with this book.
Read more
5 people found this helpful
Report abuse

JuJu89
5.0 out of 5 stars Love this book -its gorgeous!
Reviewed in the United Kingdom on 8 August 2018
Verified Purchase
Love this. Lewis and Harris are home to some of my favourite places and i adore the trilogy. Its great to read a little about the settings that inspired him and to see and the lovely pictures in the book. Really happy with the level of history regarding the island that your told about to.

My only negatives are 1) the dust cover is the only front cover. This is a SERIOUS pet hate of mine as i DESPISE dust covers. So be warned, its just plane black with text on the spine stating what it is. Not amused with that. and 2) you are going to read the sentance "untouched for milenia" about a 100 times haha.

All in all great book though :)
Read more
Report abuse

Ismene
5.0 out of 5 stars The pleasure of reading at its very best...
Reviewed in the United Kingdom on 9 December 2016
Verified Purchase
This is a brilliant book. The text and the photographs are absorbing and beautifully presented. I couldn't put the book down. I have learnt so much about these islands from reading about its history and culture, and studying the photographs. Peter May's personal style of writing draws you into the landscape and it is akin to being escorted round the Outer Hebrides. David Wilson's photographs are outstanding; you can look at them for hours as indeed I did - the seascapes are breathtaking, and images of derelict crofts, boats and blackhouse interiors are thought provoking and moving. I haven't read Peter May's fictional trilogy set in the Outer Hebrides, but if other readers have then this book will bring alive the spirit of place and settings for the novels.
Read more
3 people found this helpful
Report abuse
See all reviews
Back to top
Get to Know Us
Make Money with Us
Let Us Help You
And don't forget:
© 1996-2021, Amazon.com, Inc. or its affiliates