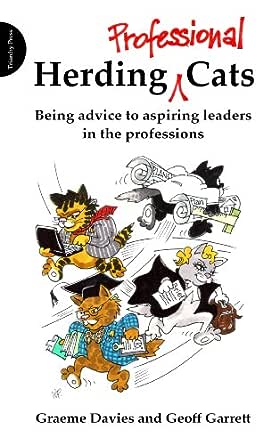 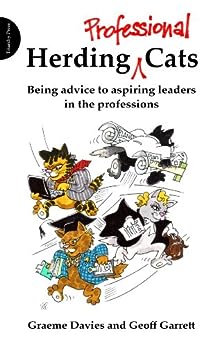 Herding Professional Cats: Being advice to aspiring leaders in the professions Kindle Edition

"This is a gem of a publication." Geoffrey Green formerly Senior Partner, Ashurst LLP, UK "This is one of the best business books I have read! The way you have structured the book really resonates with me. It was a joy to read, and offers some great insights." Satu Aavikko Team Leader, Accenture Ltd, Sydney, Australia "What a triumph! It's informal, racy, brief. I loved the many quotes, but most importantly it is WISE!!! Sir Gus Nossal FRS formerly Director, Walter and Eliza Hall Institute, Melbourne, Australia "Herding Professional Cats is a 'must read' book. I will describe my impression in one word. Brilliant!" Dr Ramesh Mashelkar FRS President, Global Research Alliance; formerly Director General, CSIR National Laboratories, India "HPC is even more inspiring and instructive than its inspiring predecessor." Prof Bai Chunli President, Chinese Academy of Sciences, Beijing, China "What a delightful day I've had, reading the manuscript of your new book - a fine text, and a wonderful extension of what was already a fine project." Dr Ian Steadman Director of Development, Oxford Brookes University, UK 'HPC is a lovely book ... many pearls of wisdom. I found myself constantly thinking 'That is so true' ." Sheridan Ash Director, PwC, UK --This text refers to an out of print or unavailable edition of this title.

Sir Graeme Davies has had the singular honour of leading three major universities in the UK: Liverpool, Glasgow and London. A New Zealand educated materials engineer and Cambridge academic, he was Chief Executive of the Higher Education Funding Council for England (1991 - 1995) and chaired the major pension fund, the Universities Superannuation Scheme (1996 - 2006). Currently, in addition to chairing various Trusts, he is a Non-Executive Member of the Public Interest Body of PriceWaterhouseCoopers. He was awarded a knighthood in the Queen's January 1996 Honours List. Dr Geoff Garrett coaches in leadership and change management for government and research organisations. A former South African 'Boss of the Year', he has led two of the world's major national research institutions: CSIR in South Africa (1995 - 2000) and CSIRO in Australia (2001 - 2008). Currently an advisor to the Queensland Government as Chief Scientist, he was appointed as an Officer of the Order of Australia (AO) in the June 2008 Queen's Birthday Honours List. --This text refers to an out of print or unavailable edition of this title.

There are 0 customer reviews and 2 customer ratings.
Back to top
Get to Know Us
Make Money with Us
Let Us Help You
And don't forget:
© 1996-2021, Amazon.com, Inc. or its affiliates