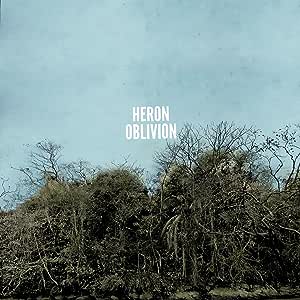 Pastoral pummel. Listening to Heron Oblivion's album feels like sitting in a lovely meadow in the shadow of a dam that's gonna heave-ho’ any minute. Members of this new San Francisco combo have put in time in both raging and relatively tranquil psychedelic sound units—this is the premise and the synergy behind this very unique and special new album. On the West Coast side, Ethan Miller and Noel Von Harmonson were together in Comets on Fire, who spent a large chunk of the mid-2000s playing unbridled, blistering rock worldwide, fueled by a steady diet of amphetaminized Crazy Horse, High Rise, MC5, Chrome, and Fushitsusha. Noel did time afterwards with Sic Alps and Six Organs of Admittance, while Miller settled into Howlin' Rain and Feral Ohms. Charlie Saufley resided at the psychedelic pop fringes with his band Assemble Head in Sunburst Sound (kindred spirits to Comets to be sure). He was joined in California by Meg Baird, a leading light in the modern psych-folk canon thanks to her work in Philadelphia’s Espers and as a solo artist (she is also the original drummer for Philly post-hardcore degenerates Watery Love). Three shades of light run through Heron Oblivion: Baird's rich, beautiful vocal approach, the locked-horns bass and drums of her and Miller's streamlined-but-motorik rhythm section, and a twin guitar tapestry that both aligns with the dreaminess of the songs and crackles out of containment to froth over the rim, punctuating Opal/Fairport moves with dramatic, explosive fuzz solos. Meg's gorgeous singing resides within an untouchable domain and never struggles, nor has to combat the avalanche of guitars that ebb and flow. The group first properly gigged in April of 2014 opening for War On Drugs. Most recently they toured the West Coast with Kurt Vile and Cass McCombs. Heron Oblivion was recorded at The Mansion in San Francisco by Eric Bauer. -Brian Turner/Music Director WFMU Jersey City NJ

4.6 out of 5 stars
4.6 out of 5
27 global ratings
How are ratings calculated?
To calculate the overall star rating and percentage breakdown by star, we don’t use a simple average. Instead, our system considers things like how recent a review is and if the reviewer bought the item on Amazon. It also analyses reviews to verify trustworthiness.

S.R.J
4.0 out of 5 stars new retro....bliss
Reviewed in the United Kingdom on 19 April 2016
Verified Purchase
I come new to the constituent parts( musician wise) to this band, and my initial reaction was , what a gorgeous bloody mess this is .
Its on a label that rarely gets it wrong, taste wise, well at least as far as I am concerned, having recently succumbed to the delights of Shearwater ( after what was a hesitant initial reaction) also on Sub Pop, the labels cache was on an upwards trajectory, so what could go wrong? Very little it seems, I like guitars( tick) I love a bit of hedonistic freak outery( tick) I love great female vocals ( tick) I'm a big fan of both psych music and folk rock( tick) especially Fairport Convention or Jefferson Airplane, to whom they bear some almost inevitable comparisons, in so far as if the Fairports were making music today , it would sound like this album.
It all sounds a bit rough, not overly polished, produced with a light touch rather than feeling like some runny honey that eventually gets too much...this is a relatively raw album and all the better for it.
It is also an album that needs your attention, your individual attention, it's not particularly for sharing, and enjoys flipping you about both in terms of pace and dynamics and mood ..it has got the lot, contender for album of the year I suspect, but there's a fair way to go yet.
Read more
11 people found this helpful
Report abuse

TSM
3.0 out of 5 stars Not the band Heron
Reviewed in the United Kingdom on 16 March 2019
Verified Purchase
A mix of psyche-folk and prog (I think). To be honest I bought this by mistake as I thought it was the English band Heron and the album was called Oblivion. Still worth checking out though. Quiet and loud, kids! Quiet and loud.
Read more
Report abuse

JA Black
5.0 out of 5 stars If you like Espers then you should listen to this
Reviewed in the United Kingdom on 18 July 2016
Verified Purchase
Like a heavier version of Espers. As another reviewer says there will been dancing but put it on, turn it up loud and listen. Wonderful music.
Read more
3 people found this helpful
Report abuse

treebark
5.0 out of 5 stars Five Stars
Reviewed in the United Kingdom on 3 February 2018
Verified Purchase
good cd
Read more
Report abuse
See all reviews
Back to top
Get to Know Us
Make Money with Us
Let Us Help You
And don't forget:
© 1996-2021, Amazon.com, Inc. or its affiliates