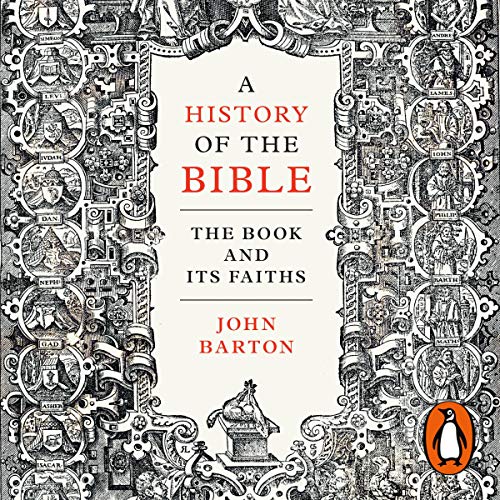 A History of the Bible: The Book and Its Faiths

Penguin presents the audiobook edition of A History of the Bible by John Barton, read by Ralph Lister.

The Bible is the central book in Western culture, yet extraordinarily there is no proper history of it. This exceptional work, by one of the world's leading Biblical scholars, provides a full account of how the different parts of the Bible came to be written; how some writings which were regarded as holy became canonical and were included in the Bible, and others were not; what the relationship is of the different parts of the Bible to each other; and how, once it became a stable text, the Bible has been disseminated and interpreted around the world. It gives full weight to discussion of the importance of the Tanakh (Old Testament) in Judaism as in Christianity. It also demonstrates the degree to which, contrary to widespread belief, both Judaism and Christianity are not faiths drawn from the Bible texts but from other sources and traditions. It shows that if we are to regard the Bible as 'authoritative' it cannot be as believers have so often done in the past.

Switch between reading the Kindle book & listening to the Audible narration with Whispersync for Voice.
Get the Audible audiobook for the reduced price of $14.49 after you buy the Kindle book.
Learn more about membership
By completing your purchase, you agree to Audible’s Conditions Of Use and Privacy Notice.
Sold and delivered by Audible, an Amazon company

4.5 out of 5 stars
4.5 out of 5
695 global ratings
How are ratings calculated?
To calculate the overall star rating and percentage breakdown by star, we don’t use a simple average. Instead, our system considers things like how recent a review is and if the reviewer bought the item on Amazon. It also analyses reviews to verify trustworthiness.

JC Taiwan
5.0 out of 5 stars To the 1-star reviewers...
Reviewed in Australia on 10 June 2022
I am a Christian although not what one would describe as a conservative Evangelical. I see one-star reviews for this in so many places about Barton's "questionable conclusions". I can only surmise that those are from inerrantists, probably evangelicals, even more likely Calvinists, the Albert Mohler types who must defend their doctrines at all costs.

Look, Barton knows his stuff and follows his research to the conclusions he feels are the simplest, least forced, unlike evangelicals who cannot even seem to admit that Jericho did not have a wall as it was not settled to the extent the Bible seems to say it was at the time of the narrative.

You really should not dismiss scholars like Barton out of hand, and you really should consider why he comes to the conclusions he does. Yes, there are those out there who like to reach controversial conclusions to make a name for themselves as in the Bultmann era, something which Eta Linnemann's writing has brought into the light, but not all are trying to do it for brownie points, and certainly not Barton.
Read more
One person found this helpful
Helpful
Report abuse
See all reviews

J. Ward
5.0 out of 5 stars The long overdue, perfect companion for any student of the Bible.
Reviewed in the United Kingdom on 3 February 2019
Vine Customer Review of Free Product( What's this? )
John Barton is one of the world’s leading Biblical scholars. He is a former Oriel and Laing Professor of the Interpretation of Holy Scripture at Oxford University, who then became an Emeritus Fellow of Oriel College, and presently is a Senior Research Fellow of Campion Hall, Oxford, which is a Catholic Jesuit Private Academic Research Institution.

In his extensive, wide-ranging and immensely thorough, 600 page book, Barton takes us through the many stages of the Bible’s composition and evolution. This is essentially an erudite, academic, but easy to read and understand, history book. Barton explains how the Bible is a synthetic amalgam of various stories, myths, folktales, historical tracts, laws and other quasi-legal texts, aphorisms and proverbs, prophecies, futuristic metaphysical speculations as well as futuristic prosaic speculations, poems, songs, conversations, speeches and personal letters… all of which have their own individual and divergent character, their own differing styles and aims, as well as each originating in widely different historical circumstances and contexts. Without knowing the historical context, one is unlikely to understand the content of the text. Barton carefully explains by whom these fragments of texts were written, the factual circumstances in which they were created, and also the reasons behind their composition. Barton then explains the process of how they came to be canonized, the bitter struggles for doctrinal supremacy, the reasons why so many texts were rejected, and the gradual assembly of the complete package that came to be known and revered as the Bible. Barton goes on to describe how these Bible texts have come to be variously interpreted in different parts of the theological world, and the consequences of such divergent, and sometimes antagonistic beliefs, throughout the world.

Barton’s analysis of the Bible makes it difficult for anyone with an objective, impartial, analytical intellect, to continue with the belief that the Bible is a fixed, non-revisionist, non-negotiable, authority which is irrevocably the absolute, complete and final word, direct from God himself. Even the concept of its holiness comes under review. Fundamentalist views concerning the Bible, which have prevailed in Western Civilisations for centuries, are now demonstrated to be understandably poignant but archaic. Barton reveals that although the Bible has been the source of basic Christian teaching for many centuries, its cursory and literal readers have probably failed to discover its true variety, depth and metaphysical abundance. Barton advocates the Bible should not be used as the final and static prescription for any fixed religious system, since there is more in living Christianity than is currently to be found in the confines and limitations of the biblical text itself.

I studied Religious Education in my youth and, over the years, listened to many bible texts being quoted during all manner of services and ceremonies, but I now realise that, without knowing the context in which they were written and for whom they were written, I was struggling to really appreciate their message and its relevance in my own life, or indeed to anyone’s life.

I whole heartedly recommend this book. I’ll certainly buy a copy in April/May when it is published in the UK, as this ‘advanced reading/review copy’ does not have any of the maps, illustration plates, index or selected bibliography. I anticipate gaining so much more by referring to the maps and historical documents. In due course, I can also follow up on the extensive reference notes for each chapter, the suggested further reading for each section and a comprehensive ‘Selected Bibliography’ that has 19 pages allocated to it at the moment.

I wish there was a book like this when I was first introduced to the bible decades ago, as I now realise that, without seeing and understanding a particular biblical text in its true context, I came to many wrong conclusions. Having said that, perhaps one also needs a good measure of life’s experience to be able to put all this historical information into context too.
Read more
191 people found this helpful
Report abuse

David Harper
5.0 out of 5 stars Well-written, full of detail, and accessible to the non-specialist and the non-believer
Reviewed in the United Kingdom on 11 May 2019
Verified Purchase
I'm an atheist, but I find the world's religions and their history fascinating, especially the early history of Christianity. Professor Barton's new book is a valuable addition to my library on the subject. He provides a well-written and detailed history of both the Hebrew Bible and the New Testament, their origins, development, and how they have shaped, and been shaped by, the Jewish and Christian faith communities over the centuries.

The book doesn't use obscure theological jargon to make its points. It is written in clear, plain English which can be easily understood by any interested layperson, whether a religious believer who wants to gain a deeper understanding of his/her faith's central text, or an atheist like myself, who regards the Bible as worthy of study because it has shaped the world we live in. I strongly recommend this book.
Read more
82 people found this helpful
Report abuse

Darkstar
5.0 out of 5 stars Eminently clear book for the non-specialist
Reviewed in the United Kingdom on 7 August 2019
Verified Purchase
The reviewer who gave this one star and claimed that it contains material with which a 16 year old would be familiar has i) never had any contact with sixteen year olds and/or ii) was a teenage prodigy with impossibly high standards. The fact is that what Professor Barton offers is a magisterial and measured survey of the contexts in which the books making up the Bible were written. The book is very readable, often witty, always genial, and is a mine of information. I was particularly impressed by the sections on the Medieval and Reformation understandings of the Bible and the contextualising of the Pauline faith/works debate was for this particular non-specialist reader revelatory in relation to Lutheranism. I also feel I understand much more clearly the different ways in which Jews and Christians read the Old Testament since Professor Barton dispenses with the cliché that these two faiths share at least one book. I am aware that Professor Barton is a an ordained priest but it is a register of his even-handedness as a writer that anyone unconvinced by Christianity will find a number more reasons to remain so having read it. For the record, CE and BCE are entirely appropriate scholarly terms and avoid the dogmatic position in which AD and BC would involve the scholar. It would merit comment only if these older terms had been employed. The work is to be recommended without reservation.
Read more
40 people found this helpful
Report abuse

Paul Nelson
5.0 out of 5 stars A genial and brilliant history of the Bible
Reviewed in the United Kingdom on 27 April 2019
Verified Purchase
This is a thrilling book, academically kosher and simultaneously a page-turner! The author writes with astonishing knowledge and also with genial good humour. He summarises present informed opinions as to the composition of the Hebrew and NT books, gently swatting as he goes conspiracy theories about "what the Church suppressed." The second half of the book is about how these inspiring, baffling texts have been translated, published, interpreted and struggled with down to the present. Underlying Barton's whole story is a view of neither Judaism nor Christianity as a "perfect fit" with their scriptures, and yet of such awkwardness being life-giving. There are, on all 400+ pages of this sympathetically written history, facts, opinions, insights, suggestions that will keep you wanting to read the next bit, if you're anything like me. Whether you are yourself a religious or spiritually inclined person, or whether your interest in the Bible is more historical or cultural or aesthetic, I think you will find this an absorbing and very enjoyable read.
Read more
41 people found this helpful
Report abuse

HamilJF
1.0 out of 5 stars Badly made
Reviewed in the United Kingdom on 15 April 2019
Verified Purchase
This is alledged to be a hardback but is actually perfect bound with hard covers. Not well enough made for the repeated reading and reference the content deserves. Pages are falling out of the middle. Edition not worth the money.
Read more
36 people found this helpful
Report abuse
See all reviews