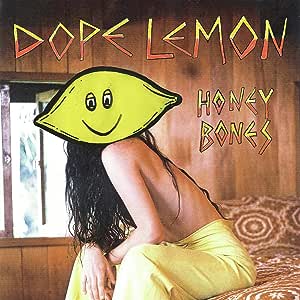 Secure transaction
Your transaction is secure
We work hard to protect your security and privacy. Our payment security system encrypts your information during transmission. We don’t share your credit card details with third-party sellers, and we don’t sell your information to others. Learn more
Details
Ships from
Amazon UK
Sold by
Amazon UK

Dope Lemon is the new musical project from Angus Stone. 'Honey Bones,' the album, has been three years in the making, recorded on Stones' farm, at his own personal recording studio, Belafonte Studios. The making of 'Honey Bones' became the ultimate reflection of Angus's existence, a world where reality and fantasy, creativity and practicality flow together unobstructed, to form things tangible but that feel like a dream.

4.5 out of 5 stars
4.5 out of 5
91 global ratings
How are ratings calculated?
To calculate the overall star rating and percentage breakdown by star, we don’t use a simple average. Instead, our system considers things like how recent a review is and if the reviewer bought the item on Amazon. It also analyses reviews to verify trustworthiness.

I discovered this with absolutely no idea who Angus Young was. Unfortunately I don't have time to listen to the rest of his back-catalogue now because I'm listening to Dope Lemon at every opportunity!
Read more
4 people found this helpful
Report abuse

gethin wood
5.0 out of 5 stars Brilliant
Reviewed in the United Kingdom on 20 September 2019
Verified Purchase
Brilliant album, and now going to see him play in Manchester
Read more
Report abuse

keith
5.0 out of 5 stars Love it
Reviewed in the United Kingdom on 20 November 2020
Verified Purchase
Great album
Read more
Report abuse
See all reviews
Back to top
Get to Know Us
Make Money with Us
Let Us Help You
And don't forget:
© 1996-2021, Amazon.com, Inc. or its affiliates