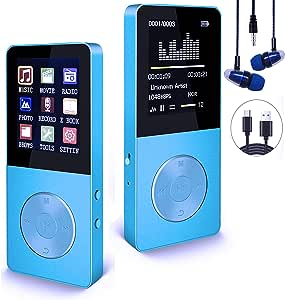 Brand: Hotechs.
3.3 out of 5 stars 4 ratings
Secure transaction
Returns Policy
Your transaction is secure
We work hard to protect your security and privacy. Our payment security system encrypts your information during transmission. We don’t share your credit card details with third-party sellers, and we don’t sell your information to others. Learn more
Currently unavailable.
We don't know when or if this item will be back in stock.

3.3 out of 5 stars
3.3 out of 5
4 global ratings
How are ratings calculated?
To calculate the overall star rating and percentage breakdown by star, we don’t use a simple average. Instead, our system considers things like how recent a review is and if the reviewer bought the item on Amazon. It also analyses reviews to verify trustworthiness.

onlineshoppinggeek
1.0 out of 5 stars Disposable product not worth the time or money
Reviewed in the United States on 20 June 2020
Verified Purchase
Does not play tracks in correct order. For example, in all my mp3 folders, it would play numbers 11, 21, 31, 41, etc. (instead of 11, 12, 13, 14, etc) . This unintentional shuffle feature was unfuriating with audiobook folders.
The software that runs this device is incredibly poorly designed. The buttons do not perform the same functions that they do on most players, so every time I tried to scroll down using the Down button, I ended up activating the Previous Screen function. This is just one example of so many it hurts my head to remember.
The super cheap earbuds have parts that are made of something like aluminum foil, and it will crinkle and pop loudly an inch from your eardrum, every time you insert or adjust them. The left earbud got very quiet after a few weeks, then soon stopped working completely. The right earbud did the same thing the next month.
The Volume Up button stopped working completely after three months, and there is no option to adjust volume any other way like with the touchscreen.
All of the functions other than Music and Radio (like Movie, Photo, and Ebook) are completely worthless on this tiny device with a tiny, very poor quality screen.
This is the second $20 mp3 player that stopped working shortly after I bought it, and was a pain to use when it was working. Next time I will just go ahead and spend more to buy a 'FiiO M3 Pro' at $80.
The only scenario I could imagine anyone being happy with buying this would be like getting it for a 5 year old who is going to either lose it or break it in a couple months anyway.


Read more
Report abuse
See all reviews
Get FREE delivery with Amazon Prime
Prime members enjoy FREE Delivery and exclusive access to movies, TV shows, music, Kindle e-books, Twitch Prime, and more.
> Get Started
Back to top
Get to Know Us
Make Money with Us
Let Us Help You
And don't forget:
© 1996-2020, Amazon.com, Inc. or its affiliates