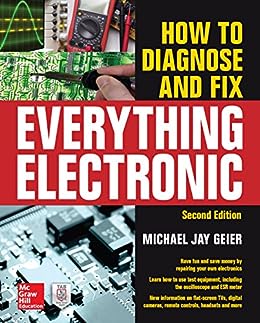 How to Diagnose and Fix Everything Electronic, Second Edition 2nd Edition, Kindle Edition

Michael Jay Geier has been an electronics technician, designer and inventor since age 6. He took apart everything he could get his hands on, and soon discovered that learning to put it back together was even more fun. By age 8, he operated a neighborhood electronics repair service that was profiled in The Miami News. He went on to work in numerous service centers in Miami, Boston and Seattle, frequently serving as the "tough dog" tech who solved the cases other techs couldn't. At the same time, Michael was a pioneer in the field of augmentative communications systems, helping a noted Boston clinic develop computer speech systems for children with cerebral palsy. He also invented and sold an amateur radio device while writing and marketing software in the early years of personal computing.

Michael holds an FCC Extra-class amateur radio license. His involvement in ham radio led to his writing career, first with articles for ham radio magazines, and then with general technology features in Electronic Engineering Times, Desktop Engineering, IEEE Spectrum, and The Envisioneering Newsletter. His work on digital rights management has been cited in several patents. Michael earned a Boston Conservatory of Music degree in composition, was trained as a conductor, and is an accomplished classical, jazz and pop pianist, and a published songwriter. Along with building and repairing electronic circuitry, he enjoys table tennis, restoring antique mopeds, ice skating, bicycling, and banging out a jazz tune on his harpsichord.

4.5 out of 5 stars
4.5 out of 5
1,486 global ratings
How are ratings calculated?
To calculate the overall star rating and percentage breakdown by star, we don’t use a simple average. Instead, our system considers things like how recent a review is and if the reviewer bought the item on Amazon. It also analyses reviews to verify trustworthiness.

R. Hook
TOP 1000 REVIEWER
1.0 out of 5 stars Gives next to no detail, makes assumptions. Look elsewhere, beware glowing reviews.
Reviewed in Australia on 10 February 2021
Want a book that will get you started with electronic repairs? Look elsewhere. The author makes a lot of assumptions and judgements on things worth or not worth fixing. Take a look at the section on VHS. It starts with do you really need to fix it? Well I don’t care for your opinion just tell me how to fix it. The index is useless, hardly any diagrams, no additional online content, no exercises to practice on. Just a waste of money find something else or just watch some YouTube videos, they are usually clearer and provide more detail.
Read more
Helpful
Report abuse
See all reviews

Normann Aaboe Nielsen
4.0 out of 5 stars Very helpfull
Reviewed in the United Kingdom on 16 July 2019
Verified Purchase
Being an amateur electronics hobbyist for several years I am looking for books that can give advanced tips of how to fix "things". This is an art in itself as it require great knowledge and experience in the field. Also, because "things" today are different from older electronics - there is so much more digital components, SMD-soldered parts and complicated PCBs -it can be difficult to give advice that last without being too general.
The book is written by an experienced old hand that know his solder and it really brings a lot of good advice, combined with nice close-up photos. I like that the author explains some cases that was complex to solve - and I would want more of such histories, as they sometimes are better to get the point through. I would have wanted some more tips on repairing or modifying modern electronic music equipment, as this is where I am now (modding older synths).
But all in all, the book is recommendable.
Read more
7 people found this helpful
Report abuse

MT
3.0 out of 5 stars Some useful info
Reviewed in the United Kingdom on 29 May 2018
Verified Purchase
Generally speaking an interesting book. The section on tools is quite useful. But it suffers many of the same problems of other books in the same ilk. It needs to assume you have next to zero knowledge so spends a long time setting the foundations and establishing the basics so you're a few hundred pages in before it really gets in to the diagnosis and fixing aspect and it's very high level / generic.

There's a wealth of information from the author's experience which is interesting, but I wonder if it would have been better to take say 10 different common appliances and just cover each in detail from teardown, troubleshooting, fix and assembly.

Interesting read but not much of a reference for future use.
Read more
8 people found this helpful
Report abuse

sammie
5.0 out of 5 stars perfect very handy!
Reviewed in the United Kingdom on 15 January 2018
Verified Purchase
i knew the basics of electrics and electronics before i read this book, am halfway through and have learnt a fair bit, mostly common sense but also helpful information on tools, what to buy, and more importantly, how to use the gear, i have most of it lying around anyway, an in depth on oscilloscopes, components, a glossary, humour, fairly easy to understand book, and humorous at times as well.
unfortunatley not a very long topic on transformers, i already know how they work, i want to know how to diagnose a dodgy one! anyway i guess its off to youtube again...(said the idiot)
Read more
8 people found this helpful
Report abuse

RJ
5.0 out of 5 stars Great book
Reviewed in the United Kingdom on 17 November 2020
Verified Purchase
Great read if you're interested in electronics. Starts by going through tools required (with quite a lot of emphasis on oscilloscopes), covers basic schematic usage, block diagrams, then does a section on typical issues in various types of equipment. This book has been updated and now mentions SSD's and memory based recorders. It doesn't suggest you try to fix these, but it deals with the analogue side of these circuits (which is typically where the problems occur) and how to trace them. I enjoyed it.
Read more
2 people found this helpful
Report abuse
See all reviews
Back to top
Get to Know Us
Make Money with Us
Let Us Help You
And don't forget:
© 1996-2021, Amazon.com, Inc. or its affiliates