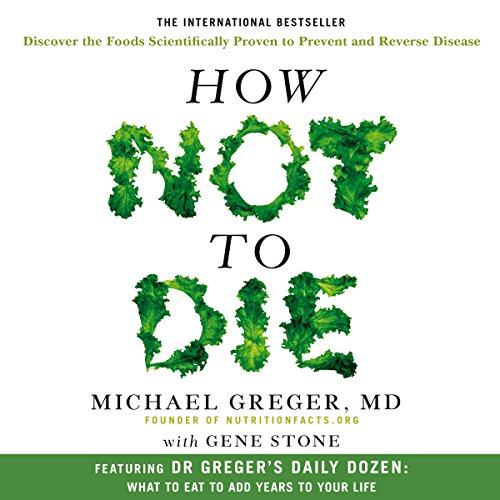 How Not to Die: Discover the foods scientifically proven to prevent and reverse disease

4.7 out of 5 stars
4.7 out of 5
14,962 global ratings
How are ratings calculated?
To calculate the overall star rating and percentage breakdown by star, we don’t use a simple average. Instead, our system considers things like how recent a review is and if the reviewer bought the item on Amazon. It also analyses reviews to verify trustworthiness.

Booksaremyblood
5.0 out of 5 stars Living, not existing.
Reviewed in Australia on 26 June 2017
Verified Purchase
Amazingly brilliant book. With three chronic diseases and a family history of heart attack and stroke on both sides, I was apprehensive about the book, but the reviews for it made me reconsider.
Despite all my health issues, I haven't felt so healthy for many years. It's all the food I love to eat, and have now reincorporated back into my life after trying Paleo (and getting sicker and sicker). Now I'm brimming with energy, smiling, and living, not just existing.
Best money I have ever spent.
Read more
9 people found this helpful
Helpful
Report abuse

Cari Batenburg
5.0 out of 5 stars If you only ever buy one book on how to improve your health...
Reviewed in Australia on 1 July 2019
Verified Purchase
..this is the one to buy! Organised by disease or health problem 'type' such as "lung diseases", "heart disease", "diabetes" etc, the author and the enormous team of qualified volunteers take great care in doing critical meta-analyses of all current research between food, health, and disease. The information and findings are presented in an easily readable format, with all research properly referenced. I have also found that the author, Dr Michael Greger, is happy to update and amend the findings on the nutritionfacts.org website when more compelling evidence is found. Highly recommend this book for any nutritionists, dieticians, medical practitioners, counsellors and coaches working with people who are struggling with ill-health.
Read more
4 people found this helpful
Helpful
Report abuse

Denise Doran
5.0 out of 5 stars Change your life and health today.
Reviewed in Australia on 18 April 2016
Verified Purchase
Dr Greger has written a book to change peoples lives from the inside out. He has changed my whole digestive tract within 2 weeks because of eating a plant based diet. It is wonderful to be pain free and eating such high amounts of nutrition. My complete blood picture taken last week has improved on every level. Cholesterol, glucose, uric acid and thyroid to name a few.
I found the book riveting to read. So many facts supported by science. Anyone who follows this plant based protocol will have the best chance if a long and healthy life. A nutrition bible for everyone.
Read more
9 people found this helpful
Helpful
Report abuse

OneHand
5.0 out of 5 stars Inspiring
Reviewed in Australia on 10 October 2016
Verified Purchase
As a health practitioner I have always believed that what goes in the mouth is the greatest contributor - or otherwise - to a long and healthy life. To date, it has always been difficult to find reliable information about diet. Dr Gregor has changed that. His research now gives me the utmost confidence in making science based recommendations to my clients. In short, his evidence now supports my belief, that changes to one's diet is possible, desirable and life enhancing.
Read more
5 people found this helpful
Helpful
Report abuse

Frank Procopio
5.0 out of 5 stars Encyclopedia of amazing information
Reviewed in Australia on 23 April 2017
Verified Purchase
A wealth of information here in this book. So many references to scientifically proven facts. So much world wide research, so much proof, wow. This book has life changed my food (and beverage) intake for ever. Thanks so much to this amazing book.
Read more
3 people found this helpful
Helpful
Report abuse

JakeE.
5.0 out of 5 stars Changed my perspective...Excellent read, very informative and genuine
Reviewed in Australia on 21 July 2017
Verified Purchase
If I could rate this book higher I would. An absolutely amazing book. I highly recommend it to everyone, absorb the information and give it a try. I gave it a shot and have been going for 2 months now. I have never felt better.

Sarah Glass AUTHOR "Love the Foods That Set You Free"
5.0 out of 5 stars How to change your life through food
Reviewed in Australia on 25 April 2020
Verified Purchase
Brilliant book about health and food. If you want to live a healthy life as long as possible, and most likely be fitter, healthier and have more energy whatever your age, read this book, it tells you exactly how to do that. This information should be known by everyone.
Read more
Helpful
Report abuse

SK
5.0 out of 5 stars Pros & Cons
Reviewed in the United States on 1 November 2017
Verified Purchase
PROS: The advice in this book can prevent all of, and reverse most of, the following conditions:
Heart Disease
High Blood Pressure
just about every form of Cancer
Hypertension
Diabetes
Acne
Obesity
Gout
Arthritis
Cluster Migraines
Alzheimer's
Parkinson's
Suicidal Depression
and more.

So ya know, if you hate typos more than you hate dying, this book probably isn't for you.
Read more
3,390 people found this helpful
Report abuse

H Pedder
5.0 out of 5 stars Absolutely fantastic. Thoroughly researched and potentially life-changing.
Reviewed in the United Kingdom on 25 September 2018
Verified Purchase
EVERYBODY SHOULD READ THIS BOOK! It is an invaluable resource. Dr Greger extolls the virtue of a plant-based lifestyle, but does so with an absolute raft of scientific evidence behind his claims and theories. The 'nutrition facts' team and the online resource is a fountain of knowledge - mining data from global studies to pull together key facts/summaries, making our job easier!

This book is split into two sections. The first discusses key ailments of the 21st century, and presents theories behind how our diet could be responsible for causing, and curing, these ailments (with a gazillion references to peer-reviewed studies, blind studies, etc). The second section offers a load of recipes - ideas for helping us to get to that magical 'daily dozen' (tip: download the free daily dozen app to help you track your intake of the valuable food groups).

Do your health a favour and read this book.
Read more
196 people found this helpful
Report abuse

Kindle Customer
5.0 out of 5 stars Good book
Reviewed in the United Kingdom on 23 January 2018
Verified Purchase
I almost stopped reading when I reached the middle of the book but I am grateful I continued. It could be boring sometimes but it is the boring stuff we don't know that kill us.
Read more
150 people found this helpful
Report abuse

A. Luegger
5.0 out of 5 stars Thank you, you saved my life
Reviewed in the United States on 19 June 2018
Verified Purchase
This book details the connection between our food and many diseases. I myself have prostrate cancer, stage 4 with bone metastasises. I was given less than a year to live at diagnosis. My conventional meds had stopped working, my cancer markers had steadily increased for the last 4 months when I read this book. I followed the recommended diet of no more processed foods, no animal products, such as dairy, eggs and meats. This was a drastic change for me. Within about twelve weeks my five metastatic areas became inactive, my cancer markers returned to normal, my blood values returned to normal, my previous borderline high blood pressure became excellent. I feel good, I have no more pain and I look healthy. Personally I don't need any more scientific proof to tell me I am on the right track. Is it easy? .... No! But I have a five year old daughter and a wife, and i need to be here a little longer. I am not claiming I am cured. I continue my conventional treatments, but I am also changing my diet, and I have started a one hour per day exercise program. The way I understand things now, I see that we are giving ourselves these terrible diseases, by eating stuff we aren't supposed to. In the process we are lining the pockets of some companies with billions of dollars. We have to understand that these industries are getting rich off our backs. I can only recommend reading this book, following the advice and if not saving your own life, at least you will make it a lot better.
Read more
1,625 people found this helpful
Report abuse
See all reviews
Back to top
Get to Know Us
Make Money with Us
Let Us Help You
And don't forget:
© 1996-2021, Amazon.com, Inc. or its affiliates