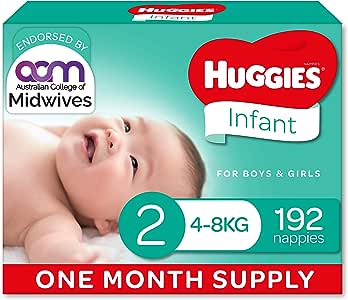 From once a month to once every 6 months.

From once a month to once every 6 months.

We'll send you a reminder before each delivery.
You save 10% on auto-deliveries for this item through Subscribe and Save. Learn more
Get it Tuesday, 1 Dec
In stock.
Qty:1
Deliver every:
1 month (Most common)
1 month (Most common)
Ships from and sold by Amazon.com.au
Share
Loading recommendations for you

There was a problem adding this item to Cart. Please try again later.
We do not have any recommendations at this time
Continue shopping

Huggies Infant Nappies are our best care for your baby's delicate newborn skin. With Huggies patented DRYTOUCH layer that quickly absorbs runny poo and is clinically proven to help prevent nappy rash. Endorsed by the Australian College of Midwives as the preferred choice for baby. Huggies 3-way skincare provides the ultimate combination of softness, dryness and breathability. Made with safe, gentle ingredients and no added nasties (no formaldehyde, elemental chlorine, natural rubber latex or any chemicals restricted by Kimberly-Clark). Features a wide ultra-soft pocketed waistband that gently molds to baby's back to help stop and lock away runny poo. With up to 12 hours leakage protection, they are perfect for use both day and night. Plus a wetness indicator that turns from yellow to blue when wet, so you know when to change. Suitable for both boys and girls.

4.7 out of 5 stars
4.7 out of 5
462 global ratings
How are ratings calculated?
To calculate the overall star rating and percentage breakdown by star, we don’t use a simple average. Instead, our system considers things like how recent a review is and if the reviewer bought the item on Amazon. It also analyses reviews to verify trustworthiness.

Mom
1.0 out of 5 stars Sub-standard for Huggies, now made In China
Reviewed in Australia on 18 September 2019
Size: Size 2 (4-8kg)Unit Count: 192Verified Purchase
I have been an avid Huggies Ultimate user since the birth of my son, 4.5 months ago. Huggies Ultimate have been the only nappies that we have found not to result in nappy rash. After going through a few different brands depending on what was on special, we soon noted that any rash would clear after a day in Huggies, and not require any cream to manage. However, after buying this one month supply from Amazon, on first fitment it was obvious that the nappies were slightly different.
My husband then noted that this box was made in China, after Kimberley Clark (Huggies manufacturer) closed the australian factory.
The fitment of the nappies was slightly different, and we have had a few escapes, which is unusual. The absorbent material must be slightly different, and also the main concern was that nappy rash appeared after a few nappy changes. My husband then sought out a box of Australian made Huggies Ultimate, and again after a day the rash dissapeared. He tried a minor science project, were it would only take 3 nappies from the made in china box for rash to appear.
After raising this with the Huggies help line, they asked us to send in a few for samples. We were dissapointed to receive the following response, and then have since went and purchased a few months supply of the Australian made nappies, until we can find another brand that is acceptable:

"Our new Huggies Ultimate range has been re-engineered to deliver our best care for baby’s skin, with improvements to our three-way combination of softness, dryness and absorbency - now with a hint of organic cotton. This is why they may have felt a little different to the ones you used before.

Our Quality Team has now completed testing of the nappies you kindly sent in and we can confirm they were within specification and that no defects were found that we would expect to cause or explain the concerns you raised with regards to irritation. Every raw material used in our nappies (whether produced locally or overseas) has been assessed to confirm that it doesn’t cause skin irritation and is not made with chemicals or other properties that are harmful to skin health. There are many types of skin irritation but one of the most common issues is nappy rash. Sensitive baby skin is susceptible to nappy rash through skin wetness or over hydration, increased skin pH levels, exposure to irritants in poo and urine, even things like teething or heat. This makes it hard to pinpoint the cause of the rash. So when it comes to skin health, prevention is always better than cure. For more information and tips on how to help to prevent nappy rash, we encourage you to visit (link removed)"
'
Read more
15 people found this helpful
Helpful
Comment Report abuse

JaCe888
3.0 out of 5 stars Good nappies on sale, but quality declined significantly
Reviewed in Australia on 12 September 2019
Size: Size 2 (4-8kg)Unit Count: 192Verified Purchase
There's plenty of praise for these nappies and they've served us well, and when on Prime sale for $32 AUD they're a bargain for the 192 pack! That being said the quality seems to have dipped significantly as out of this batch, quite a few of the nappies are showing signs of QC issues such as the adhesive taps already opened/stuck onto themselves or the material around them, or the attachment area for the adhesive piece not able to be unfolded rendering them unusable, or the skirt area for the leg also being poorly constructed with bits stuck together. In the heat of the moment of rushing to put a new nappy on, the last thing you want is to open a nappy which won't unfold or unstick, or where the adhesive pads for the waist area are not able to be unfolded or where the area you're meant to attach it to won't unfold either because it's had some kind of glue stuck to it. Out of 192 nappies in the box I accept there may be a couple of less stellar examples, but this box seems to be a bit more pervasive and I'd say approximately 15-20% of the nappies are not up to the usual quality standard and some have had to be discarded immediately. The ones where I risked using them even though the adhesive pads weren't able to be stuck entirely onto the waist area did sometimes lead to clothing getting hit with the number two.

So my conclusion is, yes they're decent nappies, and yes they're good value when on sale such as during Prime day, but be mindful the quality is not what it used to be so be prepared for some wastage unfortunately. Quite disappointing really.
Read more
6 people found this helpful
Helpful
Comment Report abuse

Rene
3.0 out of 5 stars Good product, but more suited for up to 4kg - leakage!
Reviewed in Australia on 16 August 2018
Size: Size 1 (up to 5kg)Unit Count: 216Verified Purchase
We have used these nappies since birth. They are good quality and very soft, however as our baby has grown and become a little more wriggly, we've noticed that they are quite short up the back (and our little girl is only 10th percentile, so not a big baby!) Every night where she moves around in her bassinet, the nappy seems to slip down a little at the back and we end up with a wet sleepsuit and sleeping bag. We have secured very firmly to try to prevent this, but it still happens. It seems the nappy is too small despite her only being 4kg (recommended up to 5kg).
It's a bit of an annoying situation as the next size up is massive (4-8kg) and comes up to her armpits almost, and they're also ginormous on the legs! When we do move up sizes, there is the inevitability that they are then going to leak from the legs (as this size did initially when she was smaller).

It seems that with Huggies nappies, we can either have leaking from around the legs, or leaking from the up the back. We will be testing other nappies in the market to see if we have any luck as have had similar feedback from our friends re: Huggies too! Such a shame as this bulk supply offers good value!
Read more
4 people found this helpful
Helpful
Comment Report abuse

Amazon Customer
1.0 out of 5 stars Every nappy leaks since being made in China!
Reviewed in Australia on 14 December 2019
Size: Size 2 (4-8kg)Unit Count: 192Verified Purchase
Now made in China, every single nappy leaked and required a change of clothes. One night it leaked in 3 different places! Quality has changed significantly since no longer being made in Australia.
Read more
3 people found this helpful
Helpful
Comment Report abuse

georgina
1.0 out of 5 stars Poor quality. Would not buy again
Reviewed in Australia on 14 March 2019
Size: Size 2 (4-8kg)Unit Count: 192Verified Purchase
The nappies were different to the Huggies nappies I had bought at the shops. The quality was terrible and I experienced leakage on multiple times as they felt thinner than the ones I bought at baby bunting. The top quality ones I normally use have a picture of dumbo on them however these had Winnie the Pooh.
Read more
5 people found this helpful
Helpful
Comment Report abuse

Julius Soetanto
3.0 out of 5 stars Seems different from the one you buy from the shops
Reviewed in Australia on 28 August 2019
Size: Size 2 (4-8kg)Unit Count: 192Verified Purchase
Nappies were different to the Huggies nappies bought from the shops. The size is definitely bigger and some of the details are different from one we bought from woolworths. eg. the folding, the stick tab, the size etc. Makes me wonder if I bought a fake. We only used a few and we had 2 leaks. I'm not sure if its because that the size different and the difference in folds. Although there is leaks absorbency seems similar. We are currently going back to the one we bought from woolworths, putting this aside for the baby to get bigger to give it another try. :/
Read more

2 people found this helpful
Helpful
Comment Report abuse
See all reviews
Get FREE delivery with Amazon Prime
Prime members enjoy FREE Delivery and exclusive access to movies, TV shows, music, Kindle e-books, Twitch Prime, and more.
> Get Started
Back to top
Get to Know Us
Make Money with Us
Let Us Help You
And don't forget:
© 1996-2020, Amazon.com, Inc. or its affiliates