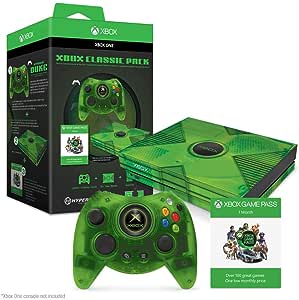 Fastest delivery: Wednesday, 21 April
Order within 4 hrs and 16 mins
Ships from and sold by Amazon AU.

Relive your early 2000s gaming experience with our officially Xbox-licensed Xbox Classic Pack. Take on all the Grunts you want on your Xbox One X with the included: 1. Hyperkin Duke Wired Controller for Xbox One/ Windows 10 PC (Green Limited Edition) - Our officially Xbox-licensed replica of the original Duke features the Xbox animated startup screen played right inside the Xbox button! And yes, it is still as big as you remembered! Voted Windows Central 2018 Best Gaming Controller of the Year! 2. Officially Licensed Console Skin for Xbox One X: Original Xbox - Ever wanted to make your Xbox One X look like an Original Xbox? Now you can, with officially Xbox-licensed skin by Controller Gear. 3. One Month of Xbox Game Pass - Get unlimited access to over one hundred great Xbox One, Xbox 360, and Original Xbox titles with the Xbox Game Pass service. Play new Xbox exclusives the day they launch! Note: the bundle and the items within this bundle cannot be returned if opened. The bundle must be sealed, complete, and in new condition in order to be returned.

Relive your early 2000s gaming experience with our officially Xbox Classic Pack. Take on all the Grunts you want on your Xbox One X with the included:

Our Xbox- replica of the original Duke features the Xbox animated startup screen played right inside the Xbox button! And yes, it is still as big as you remembered!

4.3 out of 5 stars
4.3 out of 5
184 global ratings
How are ratings calculated?
To calculate the overall star rating and percentage breakdown by star, we don’t use a simple average. Instead, our system considers things like how recent a review is and if the reviewer bought the item on Amazon. It also analyses reviews to verify trustworthiness.

Jett Monsen
3.0 out of 5 stars The controller's awesome. I'm disappointed with the skin pack.
Reviewed in Canada on 1 July 2019
Verified Purchase
The Duke controller is the only redeeming part of this package (besides the one month Game Pass code). I love the green transparent housing of the controller. It reminds me of the limited editon Xbox consoles from the early 2000's.
The skin pack for the Xbox One X was a huge blow to my exepctations. It didn't arrive with all the skin pieces! The only piece that came in the package was the decal that applies to the top of the console... I hope this isn't the case with others who have purchased the same product.
Read more
4 people found this helpful
Report abuse

gabriel
4.0 out of 5 stars Some decals could be missing
Reviewed in Canada on 10 May 2020
Verified Purchase
All the items except the side decals were there would've been nice to have the other decals
Read more
Report abuse

Ferstriker
5.0 out of 5 stars Excelente calidad
Reviewed in Mexico on 13 April 2019
Verified Purchase
Excepcional y me trae recuerdos
Read more
One person found this helpful
Report abuse
Translate review to English
See all reviews
Back to top
Get to Know Us
Make Money with Us
Let Us Help You
And don't forget:
© 1996-2021, Amazon.com, Inc. or its affiliates