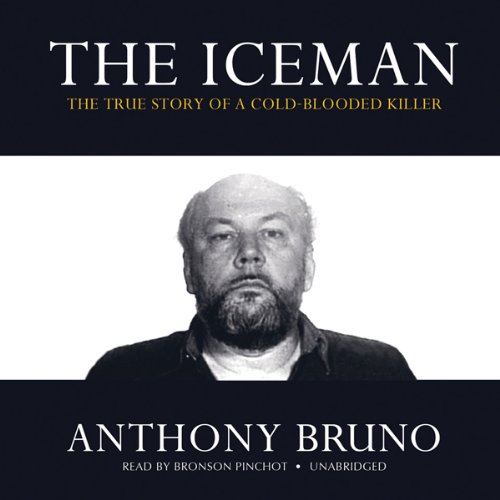 The Iceman: The True Story of a Cold-Blooded Killer

At home, Richard Kuklinski was a dedicated suburban family man; on the street, he was the Iceman, a professional hit man and lethal scam artist, a man so heartless he kept one of his victims frozen for over two years to disguise the time of death. His personal body count was over 100, but the police couldn’t touch him. Then undercover agent Dominick Polifrone posed as a mobster and began a deadly game of cat and mouse.

Anthony Bruno, a crime writer, is the author of 11 crime fiction novels and four books of nonfiction true crime. His nonfiction work The Seekers: A Bounty Hunter's Story, was nominated for an Edgar Award in 2001 for best fact crime book. His novel Bad Apple was adapted for television in 2004.

Switch between reading the Kindle book & listening to the Audible narration with Whispersync for Voice.
Get the Audible audiobook for the reduced price of $3.99 after you buy the Kindle book.
Learn more about membership
By completing your purchase, you agree to Audible’s Conditions Of Use and Privacy Notice.
Sold and delivered by Audible, an Amazon company
Share

4.5 out of 5 stars
4.5 out of 5
229 global ratings
How are ratings calculated?
To calculate the overall star rating and percentage breakdown by star, we don’t use a simple average. Instead, our system considers things like how recent a review is and if the reviewer bought the item on Amazon. It also analyses reviews to verify trustworthiness.

Jack Russell
2.0 out of 5 stars Not a great read..
Reviewed in the United Kingdom on 12 November 2011
Verified Purchase
It's ok .... and you can stick with it ( sort of ). But - it's not a 'great' read. For the money - I think you can do far better. About halfway through - you start looking for the exit - and checking on how much more of this stuff you have to read - before you finish.
Read more
7 people found this helpful
Report abuse

Mrs. Margaret L. Fletcher
5.0 out of 5 stars Ice man
Reviewed in the United Kingdom on 21 February 2013
Verified Purchase
I have seen the interviews with this man on tv.He was a brutal but fascinating man,I am not surprised that he was able to lull people into a false sense of security,as he had a beguiling smile, a gentle voice and under other circumstances would have been a very likeable man.
Read more
Report abuse

Woodham Lady
5.0 out of 5 stars Really good book.
Reviewed in the United Kingdom on 8 March 2013
Verified Purchase
Bought this for my husband who is into this type of book. He says it is really good (if you like a gory read) and he finished it within a few days of starting to read it.
Read more
Report abuse

J.R.C
3.0 out of 5 stars iceman book
Reviewed in the United Kingdom on 1 July 2013
Verified Purchase
i choose this book to read on holiday and thought the book to be ok ,but not the compulsive read that i hoped it would be
Read more
Report abuse

J JOHNSON
5.0 out of 5 stars Five Stars
Reviewed in the United Kingdom on 8 October 2014
Verified Purchase
Good condition and good read.
Read more
Report abuse
See all reviews
Back to top
Get to Know Us
Make Money with Us
Let Us Help You
And don't forget:
© 1996-2022, Amazon.com, Inc. or its affiliates