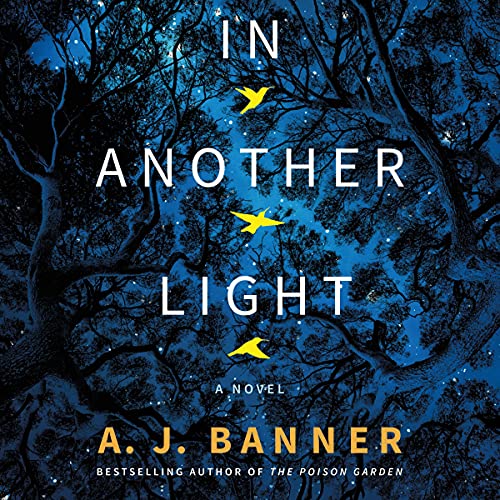 In Another Light: A Novel

A. J. Banner (Author), Vaneh Assadourian (Narrator), Brilliance Audio (Publisher) & 0 more
3.9 out of 5 stars 186 ratings
See all formats and editions
Sorry, there was a problem loading this page. Try again.

The death of a look-alike stranger leads a grieving woman down a troubling path in this riveting novel by A. J. Banner, bestselling author of The Poison Garden.

Three years ago mortuary cosmetologist Phoebe Glassman lost her husband in a tragic accident. No longer the hopeful wife and mother she once was, Phoebe is disappearing into her grief and into the quietude of her job - restoring to the dead the illusion of life. Then the body of a woman named Pauline Steele arrives in the mortuary, and for Phoebe, everything changes.

Pauline is unmistakably Phoebe’s mirror image and bears an alarmingly familiar tattoo. Even more startling is that among Pauline’s effects is a faded photograph of Phoebe. Aided by an eccentric colleague, her curiosity sparked, Phoebe investigates her doppelgänger’s life and death - and uncovers surprising clues to a shared past.

Phoebe’s emotional journey soon leads to shocking revelations about those closest to her...and even herself. When she’s driven to the brink, how much of what she discovers can she trust?

3.9 out of 5 stars
3.9 out of 5
186 global ratings
How are ratings calculated?
To calculate the overall star rating and percentage breakdown by star, we don’t use a simple average. Instead, our system considers things like how recent a review is and if the reviewer bought the item on Amazon. It also analyses reviews to verify trustworthiness.

Maggs
TOP 1000 REVIEWER
4.0 out of 5 stars You won’t be able to put this down
Reviewed in Australia on 9 November 2021
Verified Purchase
It’s exciting , frustrating in some parts
I don’t describe the story don’t want to give anything away
Just know I enjoyed the twists and results
You will too
I recommend this book , enjoy
Read more
Helpful
Report abuse

Narelle Meyer
4.0 out of 5 stars Wow.
Reviewed in Australia on 6 October 2021
Verified Purchase
Really well written, I thought I knew what was happening and then came the twist, and if that wasn't enough, there was a second twist. My first by this author but, I'll definitely will read again.
Read more
Helpful
Report abuse

Heidi (but books are better)
TOP 100 REVIEWER
5.0 out of 5 stars Heartbreaking and compelling
Reviewed in Australia on 25 October 2021
Books about doppelgangers have always intrigued me. Imagine that there is a mirror image of you out there and you’re both living your lives, unaware of one another ... it’s almost like a parallel universe in which anything is possible. And yet nothing good can ever come out of being confronted with a body that bears an uncanny resemblance to yourself, especially when there are so many questions that now cannot be answered.

Artist and sculptor Phoebe Glassman works in a mortuary where she restores the faces of the dead to make them presentable for viewing by their loved ones (gruesome, yes, but someone’s got to do it, and Phoebe is excellent in her job). She is shocked when a young woman bearing an uncanny resemblance to Phoebe ends up on the mortuary table, especially once Phoebe realises that she recognises the woman’s tattoo from a photo she once saw on her husband’s phone. From here follows a quest that will not only reveal some of Phoebe’s tragic history, but will also send her on a quest that may very well be her undoing ...

IN ANOTHER LIGHT was a story very much driven by emotion, which added a depth often missing in other mysteries. In fact, the mystery element here was firmly rooted in Phoebe’s own past rather than the death of her doppelganger. There was something particularly heartbreaking about the image of a woman not only restoring the faces of the dead, but constructing a very unique piece of artwork every year on the anniversary of a loved one (I am treading very carefully here so I don’t give too much away, so don’t worry if it doesn’t make much sense – it will, once you read it).

In fact, “heartbreaking” was one of the main themes of this novel for me, besides the fact that I was almost as invested as Phoebe herself in solving the mystery of the young woman’s identity, especially when the stakes started to become very high indeed. Emotions drove me to read this book almost in a single sitting, and though the ending wasn’t what I had expected it was a satisfying tying up of threads with a couple of surprise elements.

IN ANOTHER LIGHT will appeal to readers who enjoy character and emotion driven mysteries unveiling family secrets and past trauma. Phoebe was a well-rounded, sympathetic character perfect for driving this type of story, and the events will tug on even the most hardened reader’s heartstrings. I loved it and can’t wait to read more from this author in future.
Read more
Helpful
Report abuse
See all reviews

Anne
5.0 out of 5 stars Great read
Reviewed in Canada on 12 October 2021
Verified Purchase
This was a great read and I read it in one day. I couldn’t put it down. The plot twists and turns crept up on you. I recommend this book.
Read more
Report abuse

An Old Hippie Chick
4.0 out of 5 stars Interesting. Not quite 5 stars but a solid 4
Reviewed in the United States on 12 October 2021
Verified Purchase
I was looking for a whodunit that would keep me occupied for a boring day. I didn't want to work too hard to figure out the twist. Also--needed to be free with Unlimited and have audible narration. This checked all the boxes. Kept me distracted all day, and while the twist was in part obvious, there was enough interesting haomppenings to keep me in suspense The narrator did an ok job for the most part.
Read more
6 people found this helpful
Report abuse

Bacon's Bits
5.0 out of 5 stars Twisted to a Tee
Reviewed in the United States on 31 October 2021
Verified Purchase
When I started reading A.J. Banner’s novel “In Another Light”, I expected it to be a thriller. It is way more intricate. The protagonist, Phoebe, starts out just like other of the author’s main characters – somebody comes across a secret from the past, in this case her very own doppelgänger. But as of there, similarities end. Because, though Phoebe begins her quest for the truth about the girl who ended up in the mortuary she works at, she is way more complex than any other character A.J. Banner has so far described. I have to admit that I didn’t like Phoebe, as in her obsession she has lost empathy for others. We meet somebody who, in her grief, has lost touch with everybody around her, is focusing only on her work, becomes delusional, and even develops the traits of a stalker.
The twists and turns A.J. Banner takes us along to a very plausible ending are wonderfully creative and, at times, almost bewildering. A tantalizing page turner with careful research into psychiatry and the workings of a mortuary as well as with a touch of romance.
Read more
2 people found this helpful
Report abuse

Amazon Customer
1.0 out of 5 stars Too many words???
Reviewed in the United States on 31 October 2021
Verified Purchase
Too much explaining every thought with words. Editing should have taken some wordy explanations and just made them character thoughts or atmospheric info. Read through chapter one then skipped ahead to last chapter for the complete story. Maybe this should have just been a short story???
Read more
4 people found this helpful
Report abuse

pat stricklin
5.0 out of 5 stars A Gripping Tale of Suspense
Reviewed in the United States on 8 October 2021
Verified Purchase
A. J. Banner’s new novel, IN ANOTHER LIGHT, is a roller coaster of suspicion, despair and discovery that leaves the reader on edge until the very end. We learn the truth along with Phoebe Glassman, who circles a rabbit hole as she tries to cope with the tragic accident that killed her husband and daughter. The appearance of a dead woman on her mortician’s table plunges her into a frightening, surreal experience. Her only hope of escape is to come to grips with what really happened.
Read more
6 people found this helpful
Report abuse
See all reviews
Back to top
Get to Know Us
Make Money with Us
Let Us Help You
And don't forget:
© 1996-2022, Amazon.com, Inc. or its affiliates