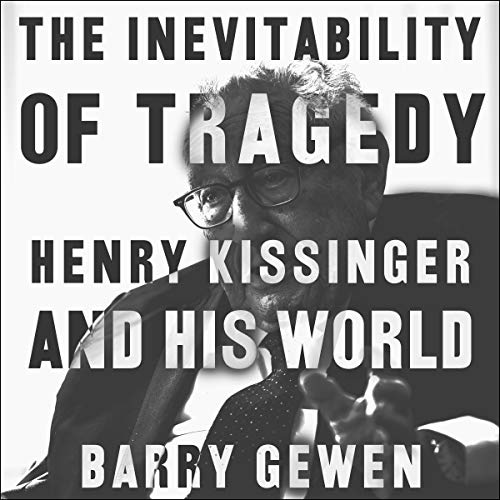 The Inevitability of Tragedy: Henry Kissinger and His World

4.6 out of 5 stars
4.6 out of 5
155 global ratings
How are ratings calculated?
To calculate the overall star rating and percentage breakdown by star, we don’t use a simple average. Instead, our system considers things like how recent a review is and if the reviewer bought the item on Amazon. It also analyses reviews to verify trustworthiness.

Lounge Lizard
5.0 out of 5 stars A different approach
Reviewed in Australia on 15 July 2020
Verified Purchase
This book comes well recommended. Unlike most biographies it approaches Kissinger from the perspective of the events that shaped his world view. It would though be always helpful to know some of the biographical details on Kissinger to put things in a bit of context. Such books are found everywhere.
The book is easy to read (unlike say Kissinger's own book, World Order which even to the scholar takes a bit of digesting) and has a mellifluous prose style.
Read more
Helpful
Report abuse
See all reviews

Pseudo D
4.0 out of 5 stars how I'm missin' yer
Reviewed in the United States on 14 July 2020
Verified Purchase
Barry Gewen is book review editor for the NYT; I share the passion, although I might not fit in there.
Henry Kissinger-does he need an introduction? They say his memoirs should have been named "Famous
People That Met Me". In the immortal tune of Monty Python, "You're the Doktor of my dreams, with
your crinkly hair, and your glassy stare, and your Machia-vell-ian schemes, you know some people say
that you don't care..."

As usual, Eric Idle's lyrics succinctly capture a number of the paradoxes of this mysterious man. While
there are others such as George Kennan and Zbig Brzezinski, Kissinger is undoubtedly the central
figure in FP in the postwar era. In the pre-Watergate 70s, he was a figure of almost universal celebration
and fascination. Watergate actually prolonged his public service, but he fell out of favor as, well,
Machiavellian, cynical, amoral if not immoral, and of course a war criminal. Christopher Hitchens
was among his fiercest opponents, but so was Phyllis Schlafly on the populist right. Every President
to the present day has relied upon him-Obama mostly through Hillary and Trump through Jared.
Bernie Sanders attacked Hillary on Kissinger, speaking for a large wing of the Democratic party.

Gewen begins with a lengthy discussion of Chile and Allende, before Pinochet. Other reviewers
have pointed out that it's disproportionately long. That's the point, because geopolitics is just
so many times and places and Kissinger has just been everywhere. He's our foremost expert
on China, although apparently he didn't know much about Vietnam and Southeast Asia, alas!
Then there's a discussion of Hitler and the Nazis. I have to give Gewen credit, because this is
an exhausted topic, but he makes the Fuhrer's momentum in those days come to life. Part of
what makes Kissinger such a world-historical figure is going from the Nazis to the postwar
US and influencing the course of the next century.

Gewen has discussions of three other Jewish thinkers of the Nazi era, Hans Morgenthau,
who was Kissinger's mentor in realpolitik, Hannah Arendt and Leo Strauss. These are too complex
to discuss here, and they in turn bring into the discussion the philosopher Martin Heidegger, who
has remained the most influential philosopher of the century, despite supporting the Third Reich.
Kissinger is the link between our everyday US politics and the great German philosophers like Kant,
Hegel and Nietzsche.

There were many paradoxes in Kissinger's relationship with America. He idealized the rural heartland,
but his world was the witty cosmopolitan sphere of Harvard and the press corps.
Among the key concepts in realism is the balance of power, which Kissinger explained in his book
"A World Restored", as well as the later "World Order". He looked at figures like Metternich after
Napoleon in 1815, as well as Bismarck, and the Treaty of Westphalia after the Thirty Years War
in 1648. Gewen shows how Kissinger's European historical sensibility interacts with the more
optimistic American spirit. And yet there is a genuine gratitude in the move from the Nazis to
America. Kissinger's realism is contrasted with the Wilsonian passion for spreading democracy.
This is both a left-wing and right-wing movement, with JFK, Carter, Reagan and George W. all
sharing aspects of it. Gewen contrasts realism with Condi Rice's recent Democracy. While
Cheney and Rumsfeld were usually bad cop, Rice was the one that really absorbed the
neoconservative Wilsonianism. Reagan contrasted with Nixon and Kissinger in viewing the
Cold War in moral terms, but his aggressive rhetoric allowed him to pursue diplomacy with
Gorbachev. He was also just plain lucky, and there's nothing wrong with that.

Gewen strongly suggests that there was a crisis of faith in the post-Auschwitz Jewish faith, and
that Kissinger is an atheist, which I have heard elsewhere. Paradoxically, the America that he
adopted had a postwar boost in faith, because our experience of WWII was so different. The
realist balance of power is not amoral, much less immoral, but it is non-absolute, non-black
and white, and requires a constant adjusting to circumstances with little hope of permanent
achievements. For instance, Nixon's peace with honor in the withdrawal from Vietnam had to
take into account a number of factors such as the potential South Vietnamese attack, and the
balance between China and the Soviet Union. Villains like Mao and Stalin are seen differently
from the balance of power perspective, although Hitler is still hated passionately because
Kissinger was there.

Just two years ago at age 95, Kissinger published an article in the Atlantic on the limits of
technology, echoing themes going back to Kant and Heidegger. It is ironic that he was needed
to remind us of the importance of the humanistic perspective, but it reflects his continental
background from the land that gave us Bach and Beethoven.
Read more
7 people found this helpful
Report abuse

5.0 out of 5 stars COMPLEXITY EXPLAINED CLEARLY BUT NOT SIMPLISTICALLY
Reviewed in the United States on 13 June 2020
A tremendous effort. The eight pages alone condensing HK's majesterial ON CHINA are worth the acquisition. Read slowly, carefully, thoughtfully. A quiet, deep spectacular work.
Images in this review

13 people found this helpful
Report abuse
See all reviews
Back to top
Get to Know Us
Make Money with Us
Let Us Help You
And don't forget:
© 1996-2021, Amazon.com, Inc. or its affiliates