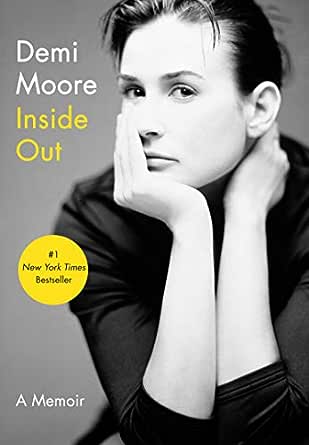 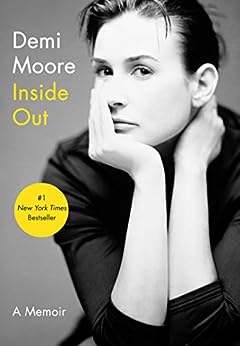 Inside Out achieves what every good celebrity memoir should: it makes you look at the subject differently, and Moore emerges as simultaneously more relatable and more remarkable. --The Guardian

"I was surprised that what I liked about it wasn't, in fact, its gossipy revelations but the window it provided into the sensitive, reflective interiority of a woman who, for all her worldly success, has always been searching for the self-acceptance that eludes so many of us, whether we're famous or not. By the end of the memoir, in a final section titled "Surrender," Moore writes, of this quest, "The truth is, the only way out is in." It is a tribute to the psychological acuity of this book that I felt the earned honesty of these words deeply." --NewYorker.com

"Entirely unexpected.... One of the most relatable depictions of motherhood I've read."--New York Magazine's "The Cut"

“I'll say this for Moore: She's got issues, and she's made mistakes -- but in this book, she owns them. Fiercely....You want juicy details? That's what you expect in a celebrity memoir, and you certainly get them here....But you also get something you almost never find in a celebrity memoir: candor.”--Tina Jordan, New York Times Book Review

"Astonishingly candid.... A fabulously frank and well-written book and, after such rollercoaster of a ride one finds oneself in awe of Moore for determinedly clinging on."--The Sunday Times

"The actress gets candid in a way few modern A-listers have.... Poignant."--People

"A candid personal narrative, in which Moore fills in not only the details surrounding the most visible parts of her history ... but the portions of her life that she once fought to protect.... It is surprising to see such self-revelation from any prominent Hollywood actress--let alone one with Moore's particular accomplishments and setbacks."--Dave Itzkoff, New York Times --This text refers to an alternate kindle_edition edition.

Demi Moore is an actress, producer, director and activist. She is known for her roles in St. Elmo's Fire, About Last Night, Ghost, A Few Good Men, Indecent Proposal, G.I. Jane, Charlie's Angels: Full Throttle, Margin Call, among many others. Moore is also a co-founder of Thorn, a non-profit that builds technology to defend children from sexual abuse, exploitation, and trafficking. She lives in Los Angeles and Hailey, Idaho.

4.5 out of 5 stars
4.5 out of 5
3,809 global ratings
How are ratings calculated?
To calculate the overall star rating and percentage breakdown by star, we don’t use a simple average. Instead, our system considers things like how recent a review is and if the reviewer bought the item on Amazon. It also analyses reviews to verify trustworthiness.

Redshoes
4.0 out of 5 stars A Worthwhile Read
Reviewed in Australia on 19 March 2020
Verified Purchase
I usually expect autobiographies to be an airbrushed version of the writer's life, but Demi Moore has left me with the impression that she is being open and honest about her life and well publicized misadventures. Whether you can understand the factors that made her both over-achieving and emotionally vulnerable, you will certainly feel that she's not trying to blame her troubles on everyone else. This is a worthwhile read.
Read more
Helpful
Comment Report abuse

Mandy White
TOP 50 REVIEWER
5.0 out of 5 stars Fantastic!!
Reviewed in Australia on 12 October 2019
Verified Purchase
A wonderfully honest book, throwing it all out there. So much has happened to this woman and yet she is still strong and hopeful. This is an inspiring story from a woman that I can't admire more.
Read more
Helpful
Comment Report abuse

Cathy R
5.0 out of 5 stars Honest and raw account
Reviewed in Australia on 1 April 2020
Verified Purchase
I found Demi's story very honest. I really felt for her with what she endured in her life. She has an amazing spirit and kudos to her with what she has achieved
Read more
Helpful
Comment Report abuse

Paulene
5.0 out of 5 stars Amazing story.
Reviewed in Australia on 20 August 2020
Verified Purchase
I didn’t realise what a tragic childhood Demi experienced. She has certainly had her ups and downs and she should be so proud of herself for what she has achieved. She is a brilliant actress and a wonderful human being. I loved this book, I couldn’t put it down.
Read more
Helpful
Comment Report abuse

Peter LeCornu
5.0 out of 5 stars Great read
Reviewed in Australia on 19 January 2020
Verified Purchase
A great story for anyone who has seen any of her movies.
Read more
One person found this helpful
Helpful
Comment Report abuse

Kate
5.0 out of 5 stars Good read - highly recommend
Reviewed in Australia on 27 December 2019
Verified Purchase
- In a world where there is a lot of fake, this book is a lot of real.
Read more
Helpful
Comment Report abuse

Joy Walker
4.0 out of 5 stars RIVETING
Reviewed in the United Kingdom on 30 September 2019
Verified Purchase
Don't agree with reviewer below. Demi's life story really is very interesting and she writes from the heart. She tells the truth and isn't afraid to say it how it is. She doesn't gloss over her sad childhood with a mother who would be up for abuse in today's society; Demi is a surprisingly sane person having been brought up by a neglectful mother - interesting to note that Demi always loved her mum, forgave her and nursed her at the end of her life.

If you want to get the gossip on Bruce Willis, Ashton Kutcher and others you WILL find it in here: warts and all! You should never judge people by appearances; Demi has struggled with her weight, her self confidence and all the issues that modern women have to deal with. She comes across as a lovely person, dedicated mum, but very insecure.

Marnei
1.0 out of 5 stars A tedious read
Reviewed in the United Kingdom on 28 September 2019
Verified Purchase
This book could have been very interesting given the life of the author but unfortunately, it is a tedious, woe is me tale where the author tries to justify her behaviour, blaming it on everything and everyone else. Every one of us encounters difficult challenges and people in our lives but our response, reaction and moving forward from them is always our choice. The responsibility for our actions, and consequences resulting from them, are ours. Normally I pass on my books to other people but the best place for this book was the recycling bin.
Read more
22 people found this helpful
Report abuse

Gwendolyn S. Sargeant
5.0 out of 5 stars Someone to truly believe in
Reviewed in the United Kingdom on 13 October 2019
Verified Purchase
I have been wanting to read Demi Moore’s memoirs for a long time. I grew up in her era and loved the appeal she had. I really enjoyed her films and loved Bruce Willis. They both had a magical appeal and it was fascinating. When I heard that she had had a rough life, I am not a nosy person but have always loved to read what made people tick, I wanted to see what made Demi special. She truly had a very rough life filled with such turmoil and extreme havoc. I don’t feel sorry for her as she survived and it made her who she is today. Life is full of misadventures and mislaid plans. I truly believe that everything happens for a reason and in order to get where you are at this moment in life, especially my life you have to go through the bad in order to get to the good part of your life. To appreciate and learn from those tough times. I appreciate life now and try not to take advantage of what is with me now or what the future holds for me. From the sounds of it Demi Moore is at that same place in life now where she appreciates and loves what is right in front of her. I take my hat off to Demi Moore and her strength to not allow life to best her, nor to allow herself to wither and die. I salute your strength and love for your three daughters they truly gave you that strength but remember Demi, you had that strength within yourself from day one, and you believed.......
Read more
17 people found this helpful
Report abuse

Kindle Customer
4.0 out of 5 stars a book a lot of people can identify with and learn from
Reviewed in the United Kingdom on 29 September 2019
Verified Purchase
This book feels like a long therapy session. Its a good thing and very interesting, it is also something a lot of people can identify with. I like that there wasn't this big hang up about all the celebrity stories. Demi Moore exposes her full journey and I appreciate the conclusions she made. For anyone expecting to read about the "juice stuff", don't bother.. the piece about A. Kutcher and the topic of the threesome was described in two sentences and was directly related to her insecurities. I finished the book in 8 hours (without skipping sections) and the only reason i don't rate this a 5 is that I feel there is something missing as she talked about her daughters and their decision to not talk to her for three years. Everything else is analysed and you get to understand why (from her perspective of course) people did what they did towards her and her understanding of it, but we don't get that as her daughters (at least I didn't get it) and Bruce Willis decided to ignore her for the years she was in therapy. It feels like its missing about two chapters and I was a bit disappointed as she had not spared in any of the other descriptions.
Read more
8 people found this helpful
Report abuse

Dianne
5.0 out of 5 stars Great read!
Reviewed in the United Kingdom on 14 October 2019
Verified Purchase
Really enjoyed reading this. When you think someone has it all, think again... life isn’t easy for anyone and I could identify with some of her experiences and found it inspiring how she now views them. I hate when people do autobiographies and don’t really open up, and just do it for the money, but I feel Demi shared a lot, more than she needed to and I feel this book is closure on some painful times in her life so she can move on. I do feel there was more to her kids not speaking to her for three years, but like I said she shared more than she had to and it’s enough for a great read.
Read more
5 people found this helpful
Report abuse
See all reviews
Get FREE delivery with Amazon Prime
Prime members enjoy FREE Delivery and exclusive access to movies, TV shows, music, Kindle e-books, Twitch Prime, and more.
> Get Started
Back to top
Get to Know Us
Make Money with Us
Let Us Help You
And don't forget:
© 1996-2020, Amazon.com, Inc. or its affiliates