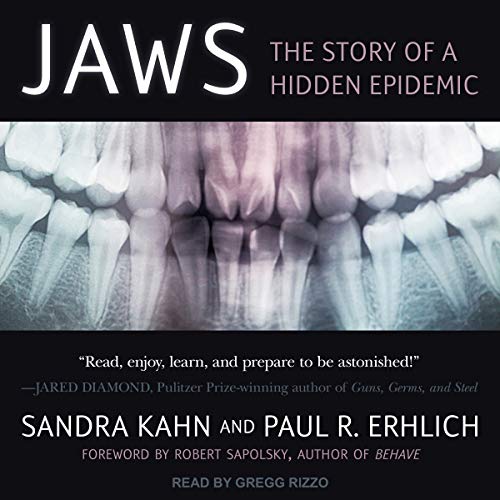 Jaws: The Story of a Hidden Epidemic

There's a silent epidemic in Western civilization, and it is right under our noses. Our jaws are getting smaller and our teeth crooked and crowded, creating not only aesthetic challenges but also difficulties with breathing. Modern orthodontics has persuaded us that braces and oral devices can correct these problems. While teeth can certainly be straightened, what about the underlying causes of this rapid shift in oral evolution and the health risks posed by obstructed airways?

Sandra Kahn and Paul R. Ehrlich, a pioneering orthodontist and a world-renowned evolutionist, respectively, present the biological, dietary, and cultural changes that have driven us toward this major health challenge. They propose simple adjustments that can alleviate this developing crisis, as well as a major alternative to orthodontics that promises more significant long-term relief.

Jaws will change your life. Every parent should listen to this audiobook.

Read more
©2018 Sandra Kahn and Paul R. Ehrlich (P)2018 Tantor
Previous page
Next page
Learn more about membership
By completing your purchase, you agree to Audible’s Conditions Of Use and Privacy Notice.
Sold and delivered by Audible, an Amazon company
Share

4.5 out of 5 stars
4.5 out of 5
147 global ratings
How are ratings calculated?
To calculate the overall star rating and percentage breakdown by star, we don’t use a simple average. Instead, our system considers things like how recent a review is and if the reviewer bought the item on Amazon. It also analyses reviews to verify trustworthiness.

Athena
5.0 out of 5 stars Fascinating
Reviewed in the United Kingdom on 10 August 2018
Verified Purchase
In the 1830s, before the American Civil War, a Philadelphia attorney and a talented artist, named George Catlin, made a series of trips to American West, visiting tribes and villages of Native Americans. Caitlin became fascinated by them and decided to document their culture and their ways of life. In his travels, he noticed, among other things, the difference in facial structure of the Native Americans compared to the people of European background. Specifically, he was struck with “their beautiful sets of teeth, of all ages, which are scrupulously kept together, by the lower jaws being attached to the other bones of the head.”

Caitlin noticed that Native Americans kept their lips closed nearly all the time, they breathed through the nose, and that they were more healthier that the newcomers in the continent. They called the whites not only “palefaces” but also “black mouths” because their mouths were open and their lower jaws were hanging down. Caitlin, as many Europeans, was a mouth breather but after noticing the Native Americans he changed his pattern of respiration and taught himself to nose breath.

Wanting to convince others to the benefits of nose breath, Caitlin wrote a short book, The Breath of Life (1861), which later retitled as Shut Your Mouth and Save Your Life. In this he “condemned the mouth breathing and assigned an array of ills to it, including ‘derangement’ of the teeth. George Caitlin and his book have been forgotten, but, as later research show he was onto something.

And then, Sandra met Paul. Sandra Khan is a pioneering orthodontist focused on a practise called orthotropics or forwardontics. Paul R. Ehrlich is a renowned evolutionist and a pioneer in alerting the public to the problems of overpopulation. Over dinner Sandra recounted to Paul her personal journey in her profession and the result was this excellent and valuable book, Jaws: The story of a hidden epidemic. The purpose of the book is to introduce the readers to the vast problem of oral-facial health. Kahn’s and Ehrlich’s basic premise is that that modern humans are developing smaller jaws, and as a result, our teeth are coming in more crowded or crooked. Moreover, it has impacts on our breathing pathway, which is becoming more crowded than ever. The tongue, too big for the restricted jaw, it falls back and restricts the passageway between the nose and the lungs, “causing a rhythmic rumbling sound,” also known as snoring.

The problem is the “poor oral posture”, argue Kahn and Ehrlich, which is exacerbated by the fact that we spend most of our lives indoors where concentrated allergens help stuff up our nasal passages and further constricting our vital breathing pathway. Smaller jaws, constricted air pathway, and sleep disrupted by snoring, a cause of sleep apnea, are “linked to serious lifelong health problems” including “ADHD, depression, cancer, and heart disease.”

We can prevent this problem, argue Kahn and Ehrlich. Parents should encourage their children to wean to tough foods that require chewing, like humans did in the days of hunter-gatherers. Also to keep their mouths closed when they’re not eating or talking. Proper oral posture with the lips closed, the tongue on the palate and the teeth lightly touching

Reading Jaws, I couldn’t stop thinking the brief lessons I once had on Hatha yoga. In Hatha yoga breath-control exercises, known as pranayamas, can help quiet the mind and reduce anxiety and stress. Nasal breathing is an extremely important part of the Hatha yoga. During this process, you slow down and control your breath. You inhale and exhale through your nose.

So, with each breath remember, noses are made for breathing!
Read more
18 people found this helpful
Report abuse

Kindle Customer
4.0 out of 5 stars Jaws reviewed by Tevin Gongo
Reviewed in the United Kingdom on 2 March 2021
Verified Purchase
Really good book. It reminds us that what is common doesn't necessarily mean is normal. That is crazy to realise that many health issues could be completely out at least better improved just by paying attention to something as simple as keeping it mouth shut lol🙂.
Read more
One person found this helpful
Report abuse

Amazon Customer
5.0 out of 5 stars Brilliant
Reviewed in the United Kingdom on 26 January 2020
Verified Purchase
Brilliant, one of the best books I've read, have recommended to family and friends
Read more
3 people found this helpful
Report abuse

JAMES COLLIER
1.0 out of 5 stars Boring
Reviewed in the United Kingdom on 2 February 2020
Verified Purchase
Some useful information, but boring. Kept making the same point. Could have been half the length
Read more
One person found this helpful
Report abuse

Amazon Customer
5.0 out of 5 stars Must read!
Reviewed in Canada on 21 June 2018
Verified Purchase
Everyone should read this. It would've saved me a fortune in dentist bills, and much pain had I read something like this earlier. Better late than never though!
Read more
Report abuse
See all reviews
Back to top
Get to Know Us
Make Money with Us
Let Us Help You
And don't forget:
© 1996-2022, Amazon.com, Inc. or its affiliates