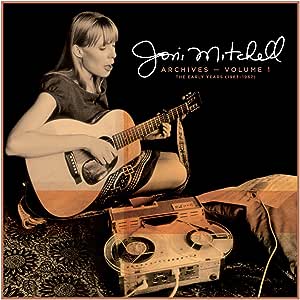 Secure transaction
Your transaction is secure
We work hard to protect your security and privacy. Our payment security system encrypts your information during transmission. We don’t share your credit card details with third-party sellers, and we don’t sell your information to others. Learn more
Details
Ships from
Amazon AU
Sold by
Amazon AU
Joni Mitchell Archives, V... has been added to your Cart
New (9) from
$71.43 + FREE Delivery

Since her debut album arrived in 1968, Joni Mitchell's songs have been embraced across generations, inspired multitudes of artists around the world, and earned every conceivable accolade. She is now opening her vault for the first time to create the Joni Mitchell Archives, a new series of boxed set releases that will span the next several years, featuring deep dives in to unreleased content from different eras of her storied career. Mitchell has been intimately involved in producing the archive series, lending her vision and personal touch to every element of the project. The 5-CD collection includes a 40-page booklet that features many unseen photos from Mitchell's personal collection as well as new liner notes featuring conversations between writer/filmmaker Cameron Crowe and Mitchell, who recently spent a couple of Sunday afternoons together discussing her archives. Crowe will continue to provide liners for future releases in the series.

4.8 out of 5 stars
4.8 out of 5
482 global ratings
How are ratings calculated?
To calculate the overall star rating and percentage breakdown by star, we don’t use a simple average. Instead, our system considers things like how recent a review is and if the reviewer bought the item on Amazon. It also analyses reviews to verify trustworthiness.

Gerard Murphy
5.0 out of 5 stars The quality of the pre - 1968 recordings will surprise
Reviewed in Australia on 18 April 2021
Verified Purchase
Wow. 5 discs of material recorded before her first album is amazing, being mostly live at small venues, demos, etc. This 1st volume covers the period from 1963 to 1967 when, apart from some songs she wrote that were hits for others, she is fairly unknown to a wide audience. Fully recommended. I wonder if another volume or volumes will follow at some stage. Her journey from a folkish style to jazz is an amazing journey.
Read more
Helpful
Report abuse

Graham Walker
5.0 out of 5 stars Beautifully presented box set of pre-fame Joni.
Reviewed in Australia on 6 January 2021
Verified Purchase
You can hear right from the very first of these recording (1963) that she was a major talent and gonna go far, which of course she did. This set will get many repeat listens in my house (it already has!). Get it!
Read more
Helpful
Report abuse
See all reviews

Wayne From Leeds
4.0 out of 5 stars Interesting for those who like Early Joni.
Reviewed in the United Kingdom on 30 November 2020
Verified Purchase
I have been a fan of Joni for many years and never did I think that we would see the Archives opened as we are now. This is an exciting time for Joni fans such as you and I, there has been quite a lot of product released in the past three years including box sets and signed books and I’ve bought everything I can get my hands on!.
This set covers pre signed Mitchell and as you can imagine at times the sound quality isn’t top notch (probably due to the use of home reel to reel tape recorders), but I feel it shows her development and even a subtle change in vocal presentation in these first three years of recording. I listened to the full set and that really stood out for me initially Joni sounded similar to other artists of the time (especially on disc 1/2). She actually did say folk singing was easy to copy and I do feel she sounds similar to Baez/Collins on a lot of the initial discs. Discs 4 and 5 are the revelation to me, really showing how Joni takes her own direction especially in 1967.
This set I feel is more suited to dedicated fans like myself, casual fans may not really enjoy it as much as it isn’t a Blue or Court and Spark for sure, it isn’t as accessible but there are some absolutely great versions of for example “Urge For Going” with its explanatory introduction is lovely.
I do feel that the set is a little expensive for what it is at retail price, if all the money was going to Joni I wouldn’t mind but had to buy from Amazon due to import duties from Jonis Official Store ( please open a UK store!, as I missed out on the special editions due to the expense of getting them over here!). This set is a precursor of the more meaty product, I do feel that a disc of her early Canadian TV performances would have been the Cherry on the top but sadly that wasn’t included, hopefully in future volumes we will get something (fingers crossed for live at Wembley Stadium if it was filmed !!),
Read more
14 people found this helpful
Report abuse

Tim Kennedy
5.0 out of 5 stars Incredibly Valuable Archive Recordings
Reviewed in the United Kingdom on 18 November 2020
Verified Purchase
This is something I never thought would happen, the unique, astonishingly gifted singer and songwriter Joni Mitchell has opened her archives to public view - and it's incredible. This is just volume one, consisting of early demos, unheard songs and early live performances as she found her feet in the Folk Scene of 1960s Canada. Already on these recordings Joni is a formidable songwriter and performer. The price is incredibly low for such an amazing artist and such fascinating material. As this is only the first volume I am already eagerly anticipating the next releases.
Read more
6 people found this helpful
Report abuse

P C.
5.0 out of 5 stars Stunning
Reviewed in the United Kingdom on 25 November 2020
Verified Purchase
A wonderful collection of recordings that illustrates the emerging talent and early years of this wonderful artist .You can hear her songwriting singing and musical talent growing in confidence throughout the five disc set .I especially enjoyed the second disc and hearing a number of lovely songs that never made the albums .A great addition to anyone’s Joni collection I can’t wait for the Next release
Read more
5 people found this helpful
Report abuse

vaughan jones
5.0 out of 5 stars Brilliant
Reviewed in the United Kingdom on 10 January 2021
Verified Purchase
I have had difficulty getting this from other outlets So well done Amazon.Quite simply a beautiful collection for Joni Mitchell fans. A fine tribute too one of the greatest musical poets ever 10-10
Read more
3 people found this helpful
Report abuse

Daydreamer
4.0 out of 5 stars Giggly genius
Reviewed in the United Kingdom on 8 March 2021
Verified Purchase
This is a much warmer set than her official records. Most tracks are from the first four albums and before, including songs that were never released, such as (astonishingly) Urge for Going and Eastern Rain. There are also songs she didn't write, from the traditional folk canon, like House of the Rising Sun, and Guthrie's Deportee. There are interesting different takes of some tracks, and recordings much older than the official releases. There are live performances, where you can hear her re-tune to her strange tunings, and break a string. Her spoken introductions are not very informative, and for someone with such a serious image she does a lot of giggling. If you're a devotee of her early work, you'll love this, despite the price. She's really a most unusual writer and performer, in a league of her own.
Read more
Report abuse
See all reviews
Back to top
Get to Know Us
Make Money with Us
Let Us Help You
And don't forget:
© 1996-2021, Amazon.com, Inc. or its affiliates