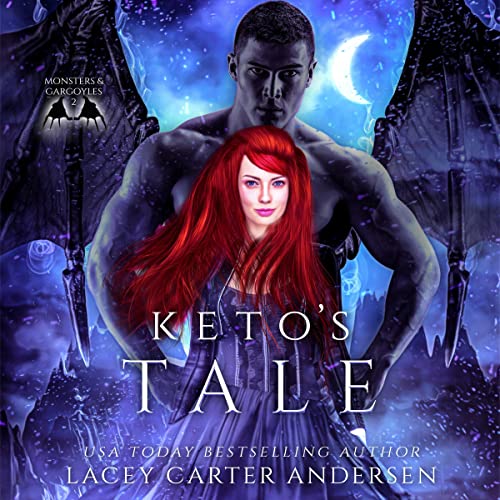 I've got a bad reputation, and all because of my jackass brother. Yes, I'm known as the mother of all sea monsters. And yes, I can control powerful creatures who kill and destroy on my command.

But no, I'm not actually in charge. I'm my brother's slave.

So, life sucks just about as much as it possibly can. At least that's what I thought until my brother decides I'm more useful sacrificed to angry sea dragons who despise mermaids. And when I see gargoyles heading straight for me, all I'm left wondering is who will kill me first - the winged monster-hunters, or the angry sea dragons?

What I don't expect? The gargoyles don't know who or what I am. So maybe, just maybe, if I can hide my identity long enough, I'll survive. But it might take a little distraction to accomplish. The thing is, I don't think I mind distracting four hard-as-stone gargoyles who can't stop staring. As long as at the end of this, I don't end up with my head on a platter.

Keto's Tale is a steamy reverse harem romance that involves one lucky mermaid and four hot gargoyles. It's also a #whychoose romance, meaning the heroine doesn't have to choose between her stone-hard love interests.

4.3 out of 5 stars
4.3 out of 5
62 global ratings
How are ratings calculated?
To calculate the overall star rating and percentage breakdown by star, we don’t use a simple average. Instead, our system considers things like how recent a review is and if the reviewer bought the item on Amazon. It also analyses reviews to verify trustworthiness.

Shannon
4.0 out of 5 stars Loved the unique spin on mythology
Reviewed in Australia on 13 June 2019
I really enjoyed the authors take on all the mythology and the introduction to two more potential main characters. There were quite a few discrepancies towards the end - body parts touching in impossible ways which ruined the imagery for me and unrealistic sexual situations which meant I couldn't relate. The ending also seemed quite rushed, but overall a very enjoyable read.
Read more
Helpful
Report abuse

ShadowsAngel (Ayla)
4.0 out of 5 stars Mermaid's & Gargoyles oh my!
Reviewed in Australia on 14 June 2019
I really enjoyed reading Keto's story. The characters are well developed and the story flows nicely. Although I didn't know what to expect I found myself laughing quite a bit. The only thing I wasn't totally on board with is a mermaid who had lived so long wouldn't be so naive about everything.
Read more
Helpful
Report abuse

Ange B
TOP 500 REVIEWER
5.0 out of 5 stars The legendary Keto, goddess of sea monsters meets her matches
Reviewed in Australia on 6 May 2019
Keto's Tale is a wonderful melding of legendary God's and Monsters and modern expectations of how males should treat their females. This book had an awesome and engaging story which kept me engrossed. The sexy times were very sexy, but there was also sweetness and healing. I am really a fan of this new series, it takes me on journeys and adventures and are just what I long for.
Read more
Helpful
Report abuse

Brii Rose
5.0 out of 5 stars AMAZING!
Reviewed in Australia on 4 May 2019
I absolutely LOVED this book! I was hooked from the very first page. I love her 'monsters' especially her hydra! Gosh amazing characters amazing story. Not to mention the second in command getting eaten! Hahaha sorry for spoilers but thats my favorite part! Cant wait to see whats next! I hope Cerberus gets a book too (spoiler again sorry)
Read more
Helpful
Report abuse

SamMac
5.0 out of 5 stars Brilliant read
Reviewed in Australia on 12 May 2019
A great read from the Monsters and Gargoyles series!
I love the how the legend of Keto - Queen of the sea monsters gets a modern day twist.
Such a great story and highly recommend.
Read more
Helpful
Report abuse

Kindle Customer
5.0 out of 5 stars Fantastic
Reviewed in Australia on 18 May 2019
Wow what an amazing addition to the monsters and gargoyles series. I hope we get to see more very soon.
Read more
Helpful
Report abuse
See all reviews

Claudia C.
5.0 out of 5 stars Great tale
Reviewed in the Netherlands on 29 July 2019
Verified Purchase
Why are broody man always so sexy, I just want to eat them up, not all at once to be honest I think I have to be a goddess for that, thank the stars I can live through these amazing books.

Loved the first story because of how it flowed and the Gargoyles offcourse, the second one didn't disappoint at all, a great read!
Read more
Report abuse

Eydryth79
5.0 out of 5 stars You need to drown in it
Reviewed in France on 3 May 2019
Verified Purchase
I didn’t like this book, no, not at all, I loved every second of it, swallow it whole, didn’t even emerge from it when kids was hungry. This series is just awesome. Keto is so strong and so weak in other ways. She is sexy but innocent, even with her heavy past and lots of abuses she did survive. Those gargoyles are another story, each with its own past, character, worries and sentiments. And the ending made me happy, however I must say that I am worried for Keto’s “monster” friends and do hope hear about them soon.
Read more
Report abuse

Lauren
4.0 out of 5 stars Fun twist on mythology
Reviewed in the United States on 30 June 2019
Verified Purchase
I am not nearly as familiar with Keto in Greek mythology as some of the other Goddesses and Gods but this was still a really enjoyable twist to mythology. I loved Keto’s personality and behavior, especially in regards to nudity and sex. Those interactions between her and the Gargoyles were humorous.

While I really enjoyed the story and plot, it felt rushed at times. The Gargoyles seemed pretty adamant about being celibate to earn their chance of being with a female gargoyle but they didn’t put up much of a fight when the time came where they broke their vows. I remember in Medusa’s story, there seemed to be a lot more conflict among the Brotherhood and their own innerselves. I didn’t feel like this book portrayed nearly as much of the deep contemplation on breaking their vows for Keto as I read in Medusa’s.

I liked being introduced to the other women that could potentially have their own story as this series progresses. I can’t wait to read Cerberus’s story 😁😁

Overall, this was a good book yet it was a pretty quick read for me. I loved the creativity that the author put into this series so far with Medusa and Keto and I can’t wait to read more to see how she adds her own twists to other myths. Definitely give this book a chance if you enjoy RH, mythology, steam, and a HEA.
Read more
2 people found this helpful
Report abuse

Daisy Sauceda
5.0 out of 5 stars Keto's journey
Reviewed in the United States on 18 July 2020
Verified Purchase
The second book in the monsters and gargoyle series and it is just as good as the first one. Keto is a sea goddess and she has her own demons she needs to battle. One such demon is her brother who has enslaved her and has her do unspeakable horrors. One day that changes when she is rescued by some monster hunters. unbeknownst to the hunters they have no idea who she is and so there are little white lies told. You have Steven, Clark, Max and Arthur who are a damaged brotherhood but they still manage to work together. Will their past rear its ugly head and cloud their judgement. Can Keto get them to help her escape her fate that her brother has bestowed on her. This book is truly touching to read about the heartbreak, worries and to see a blossoming of love. What will happen with them. You definitely need to read this book. It is worth it.
Read more
One person found this helpful
Report abuse

JodyL
5.0 out of 5 stars Shapeshifters, gods, and a reverse harem...Hot!
Reviewed in the United States on 7 February 2020
Verified Purchase
Max, Athur, Stephen and Clark form a brotherhood of gargoyles. They are sent to find the monster Keto.
Keto is the Mother Goddess of Sea Creatures. But she is also a slave to her brother. She wears a collar that he put on her that tightens around her throat when he wants her to come to him and continues to tighten if she refuses to do whatever he asks.
When the gargoyles stumble upon her she lies about who she is. Can they ever accept that she isn't truly the monster they think she is?
We are introduced to 2 other "monster " women. I am excited to read more of these books!
Read more
Report abuse
See all reviews
Back to top
Get to Know Us
Make Money with Us
Let Us Help You
And don't forget:
© 1996-2022, Amazon.com, Inc. or its affiliates