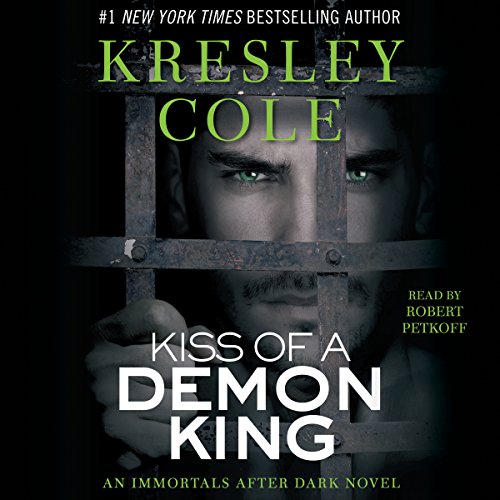 Kiss of a Demon King: Immortals After Dark, Book 7

4.7 out of 5 stars
4.7 out of 5
490 global ratings
How are ratings calculated?
To calculate the overall star rating and percentage breakdown by star, we don’t use a simple average. Instead, our system considers things like how recent a review is and if the reviewer bought the item on Amazon. It also analyses reviews to verify trustworthiness.

AvidReader
5.0 out of 5 stars Loved it
Reviewed in Australia on 26 August 2015
Verified Purchase
absolutely enjoyed every second of it, it was just the right dose I needed to keep me entertained can't wait to start reading Lanthes story
Read more
Helpful
Report abuse

Al
5.0 out of 5 stars Five Stars
Reviewed in Australia on 6 October 2014
Verified Purchase
Always brilliant and this is another great story in the series.
Read more
Helpful
Report abuse
See all reviews

Shona Booky Ramblings Lawrence
5.0 out of 5 stars Another fab instalment in a great series
Reviewed in the United Kingdom on 19 August 2014
Verified Purchase
Kiss of a Demon king takes place at the same time as Cadeon's story Dark Desires After Dusk. I was so glad that we got Rydstroms story right after, because there were aspects of Cadeon's story I wanted to see more of and not have them gloss over..

I call this series of books my warm and fluffy, not because they are lacking in someway, but because this world has been so well written that when you pick up the book, even when it features a new character you are immediately surround by that 'warm hug from an old friend' feeling. That feeling that helps you slip into the pages with ease and forget the world going on around you.

Rydstrom was such a great character to read.. torn between what he wanted and what he felt was right. Willing to sacrifice his own happiness, his own female so that he could try and regain his crown to help his people. And then when he had the chance to spend time with his female we find out that the good kind king wanted something a little spicier from his female than placid and compliant. Oh how well Sabine was made for him... and he for her. I will probably say this every single time, but i think Sabine and Rydstrom are my new favourite couple. They are just so perfect for each other, a perfect balance of kind and wicked.

And Nix.. oh Nucking Futs Nix how I love this Valkyrie. I really hope she continues to be in every book. And I cant wait until she has a full book of her own
Read more
One person found this helpful
Report abuse

Jessica
4.0 out of 5 stars Kresley Cole's got style...
Reviewed in the United Kingdom on 3 February 2009
Verified Purchase
Rydstrom has a plan...after over a thousand years of fighting to regain his crown and bring freedom and peace back to his ravished kingdom and oppressed people there is the possibility of success. An enchanted sword has been forged by Groot the metallurgist and has been promised by him to kill Omort for good. The strain of failure weighs deeply on Rydstrom but for a man who has always put his kingdom before everything else, even his search for his destined female how will he react when all his suppressed fantasies and ignored desires suddenly seem as if they could be made possible? But not by the pure and good queen he imagined marrying but by an evil and selfish sorceress, who captures him and who only wishes to use his body for her own ends with the intention of furthering the decline of his kingdom and adding to his continued failure of regaining his crown.

Sabine has a plan...to ensure the survival of herself and her sister Lanthe she must take full advantage of a prophesy made hundreds of years ago, that hailed her as the fallen Rage demon king's fated mate. When she was a child Omort sort her out for just this reason, to ensure his power over her he bound Sabine to him by poisoning her and Lanthe and making them rely on him for the antidote. You see he, like Sabine wants the power that surrounds the Well of Souls at castle Tornin but whereas he wants the power to extend the evil reign that he has established in the kingdom of Rothkalina all Sabine wants is a place where SHE can rule, a sanctuary from her Omorts perverted desires and her relentless enemies the Vrekeners (winged hunters of evil Sorceri). But to achieve this she must obtain the key to unlock the Well's power and that just so happens to be the legitimate heir of Rydstrom the dethroned king. But Sabine's smart and a schemer and if seduction is only way to get what she wants - a wedding vow and pregnancy - well needs must...

The book although well written, is slow and considering the high stakes the lack of plot twists and action is odd. Although the plot makes more sense to me upon reflection, Nix said in Conrad's story that Rydstrom would have to chose between his mate and his kingdom. And so the fact that the book is so much about Rydstrom and Sabine and not the quest to regain his crown makes sense. Even so I missed the action and intensity of those first three books. But it's logical that the series has moved on and doesn't focus entirely on the concept of eternal mates, this is of course still the formula but Cole doesn't insult our intelligence with her world building; if the first three books were about establishing the importance of the characters destined mates, Conrad's book delivered a real emotional punch and Cade's dealt with the moral ambiguity that many of Cole's characters exhibit. But still the pacing here was a little flaky; the ending in particular was rather abrupt and nowhere near as epic as I had thought. This wouldn't have mattered much if I hadn't thought there was something lacking in Rydstrom's and Sabine's developing relationship but as it was I couldn't submerse myself in their story.

There are some wonderful elements however. I liked Sabine (Rydstrom too) she's witty, vibrant, sassy and yes amoral. But she isn't evil, the author gives us logical reasons for why she is the way she is; dying over a dozen times is likely to make a person willing to do anything to survive! She is also utterly unforgiving towards her personality, she is who she is. The secondary characters were what kept me interested though and the great little nuances Cole adds to the world she's crafted. I was particularly delighted by Lanthe, Thronus, the Hag and Nix is great as always but I found that Lothaire in particular stole any scene he's in.

None of these things makes `Kiss of a Demon King' a particularly bad book, this is a five star series and Cole is a great writer, furthermore all the elements are there; sensuality, darkness even a little gore, wonderful world building and the whole book exudes a quirky sassy attitude. But for me there was something unsatisfying about the dynamics of the book and the characters interaction with each other that made me feel as if something was lacking ...oh well this is a personal thing I'm sure and I wouldn't want to put anyone off, it's different to Cole's other books and therefore worth reading. Besides the series hasn't deteriorated but it has altered its format and Cole throws some decent curve balls, there is in particular a interesting surprise for those who have read Gena Showalter's `Lords of the Underworld' series (though this could be tricky pulling off as the two series are based on different mythologies after all). But the bottom line is that Kresley Cole's got style and that is what will always make these books worth reading.
Read more
One person found this helpful
Report abuse

Kirsty
4.0 out of 5 stars For adult readers
Reviewed in the United Kingdom on 23 August 2014
Verified Purchase
I'm a big fan of the IAD series and this is another fun addition to the IAD world. I've re-read it a few times and have very much enjoyed it. Best to read the series in order in order to really appreciate it - especially considering 'Dark Desires After Dusk' directly complements this story (telling the story of Rydstrom's brother and the quest which is continually mentioned in this book - and indeed, integral to the story). Lots of steamy scenes, so probably best to read it alone...
Read more
One person found this helpful
Report abuse

Ms. S. Rai
5.0 out of 5 stars Forgetting then loving it.
Reviewed in the United Kingdom on 16 September 2014
Verified Purchase
I actually had already read this book previously because of mentions from readers. But I didn't remember it and bought it again to read. I didn't give much attention to the book previously and so ended up forgetting it. But when you actually pay attention to the story, you will find yourself naturally into it. The story was really good and I still remember the story now even after several months. The book is a really good read.
Read more
Report abuse

Sally O'Leary
5.0 out of 5 stars Good read
Reviewed in the United Kingdom on 17 May 2019
Verified Purchase
Always an interesting and saucy read from Kresely Cole!
Read more
Report abuse
See all reviews
Back to top
Get to Know Us
Make Money with Us
Let Us Help You
And don't forget:
© 1996-2021, Amazon.com, Inc. or its affiliates