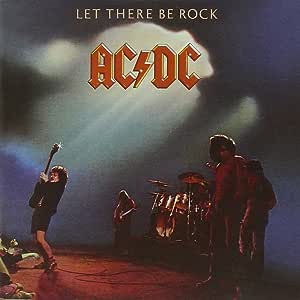 Secure transaction
Your transaction is secure
We work hard to protect your security and privacy. Our payment security system encrypts your information during transmission. We don’t share your credit card details with third-party sellers, and we don’t sell your information to others. Learn more
Details
Ships from
Amazon AU
Sold by
Amazon AU
New (2) from
$12.99 FREE Delivery on first order.

LET THERE BE ROCK

Let There Be Rock is the fourth studio album by Australian hard rock band ACDC, released on 21 March 1977. All songs were written by Angus Young, Malcolm Young and Bon Scott. It was originally released in Australia on the Albert Productions label. A modified international edition was released on Atlantic Records on 25 July 1977.

4.8 out of 5 stars
4.8 out of 5
1,347 global ratings
How are ratings calculated?
To calculate the overall star rating and percentage breakdown by star, we don’t use a simple average. Instead, our system considers things like how recent a review is and if the reviewer bought the item on Amazon. It also analyses reviews to verify trustworthiness.

Bazzer
5.0 out of 5 stars BY FAR THERE BEST
Reviewed in the United Kingdom on 11 September 2014
Verified Purchase
If ever a band produced 1 great album and never again came close to repeating that brilliance it was Ac/ Dc. Most people suggest Back In Black is their masterpiece but, for me, aside from that title track the band became a pop/ rock boogie band from that point until now. This on the other hand is full throttle, strangle your jugular fast and heavy rock 'n' roll. If you listen to the follow up 'Powerage' it is a very good album in it's own right but following Let There Be Rock it could never withstand comparison. Balls to the wall rockers like Whole Lotta' Rosie, Get Down and of course the title track epitomise the band as a monster that steamrollered all competition and sadly were never the same again.

So this album is 37 years old and many reviewers have gone into detail about the music so no point in me adding my quota. All i can suggest is, for those of you who enjoy the band's more popular and commercial material, i can only advise you give this a try. If you still prefer Flick Of The Switch, Fly On The Wall and the recent Black Ice and the like well good for you.
Read more
8 people found this helpful
Report abuse

ratmonkey
5.0 out of 5 stars A good place to be
Reviewed in the United Kingdom on 9 February 2012
Verified Purchase
This shows a vast difference to their first 2 international releases, or 3 Australian ones. It is tighter and contains a surplus of good songs. Yes it does reuse the excellent 'Problem Child' from Dirty Deeds and try to pass it off as its own but its no matter as it does fit and it is such a beauty.

'Go Down' is a great start. Not a classic but a good, beefy, filthy start, the riffs being that little bit meatier than of those past. 'Dog Eat Dog' is a typical catchy rocker that AC/DC can just do. The title track is by now immortal and it is a huge song. 'Bad Boy Boogie' is one of the also-rans of the album. It is a fine, rocking tune but it lacks a certain edge and quality that the others have. Then comes the aforementioned 'Problem Child' as a replacement for 'Crabsody in Blue' from the australian version. The excellent and almost bluesy 'Overdose' comes next. Slow and dirgey but has such power and such a riff that it becomes an almost classic. Then the actual classic 'Hell Aint A Bad PLace To Be' kicks in. It's good ;). Followed by ANOTHER belter 'A Whole Lotta Rosie'.

First true band classic and a monster of an album. Despite it's release date it still sounds fresh today, which is why these songs will exist for a very long time.
Read more
One person found this helpful
Report abuse

Andy Moore
5.0 out of 5 stars Roadhouse Rock
Reviewed in the United Kingdom on 2 September 2003
Verified Purchase
From the opening riffs of 'Go Down' and the squeals of Bon Scott's first words you just know that you are in for a right belter of mean, dirty rock from the real AC/DC. And do the band deliver or what? Yes they do, by the amp load.
This album used to play havoc on my Binatone record player, but things have moved on a little since then hi-fi-wise. However, the essence of the music is just as memorable as it ever was. Up until the death of Bon Scott, AC/DC could do no wrong in my eyes and with the re-release of these early albums as re-mastered additions there is all the reason to replace your old vinyl copies.
'Let There Be Rock', 'Problem Child', 'Hell Ain't A Bad Place To Be' and 'Whole Lotta Rosie' stand out.
The lavish artwork is great too. Buy.
Read more
4 people found this helpful
Report abuse

Amazon Customer
5.0 out of 5 stars Acdc let there be rock 🎸🎸🎤
Reviewed in the United Kingdom on 6 October 2019
Verified Purchase
Brilliant vinyl good sound as good I first heard it in 1977 😊
Read more
One person found this helpful
Report abuse

L. J. Fisher
5.0 out of 5 stars Not the original track listing
Reviewed in the United Kingdom on 11 February 2012
Verified Purchase
The tracks on this cd are based on the American vinyl release of this album from 1977 they took off Crabsody In Blue and added Problem Child from their previous album Dirty Deeds because no other AC/DC album had been relased in the States yet. So if you buy this version of the album and buy Dirty Deeds you've got 2 versions of Problem Child. The way to avoid this is to buy the Australian import version of Let There Be Rock which has the orignal black & white cover based on the Australian original vinyl version of Let There Be Rock.
Read more
3 people found this helpful
Report abuse
See all reviews
Back to top
Get to Know Us
Make Money with Us
Let Us Help You
And don't forget:
© 1996-2021, Amazon.com, Inc. or its affiliates