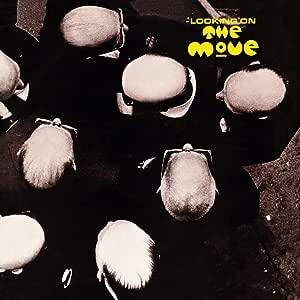 Limited vinyl LP pressing. Looking On is the third album by The Move, released in December 1970 and is their first LP to feature Jeff Lynne. With Wood's use of cello and woodwinds and Lynne's piano in addition to their usual guitars and vocals, anticipating the work they would later pursue in The Electric Light Orchestra, whose debut album they were starting to record at around the same time. The Move was effectively a dead band walking when Lynne joined in February 1970 after fronting (and producing) The Idle Race. Wood had wanted to launch a new group with Lynne that would feature rock and strings, to pick up, in theory, where the Beatles' 'I Am the Walrus' had left off.

4.8 out of 5 stars
4.8 out of 5
51 global ratings
How are ratings calculated?
To calculate the overall star rating and percentage breakdown by star, we don’t use a simple average. Instead, our system considers things like how recent a review is and if the reviewer bought the item on Amazon. It also analyses reviews to verify trustworthiness.

Siriismack
5.0 out of 5 stars A Must Buy
Reviewed in the United Kingdom on 3 June 2016
Verified Purchase
This is pure gold. The Move during their heavy phase just prior to the birth of ELO. Some very good progressive heavy rock here. The Album, much under rated on original release, disappeared almost without trace at the time. From Great driving rock like Turkish Tram Conductor Blues (credited to Bev Bevan),and the two singles from the LP, Brontosaurus and When Alice Comes Back To The Farm, to the mysterious atmospheric What? And the quirky Open Up Said The World At The Door with thunderous outro and Feel Too Good . The extras are very special too, with a proper release at last for the radio sessions of the time. Writing shared between Roy Wood and Jeff Lynne. Plus great versions of The Beatles She's A Woman (though hardly recognisable as such I am pleased to say), and finally Falling Forever gets a proper release. I Like this very much
Read more
10 people found this helpful
Report abuse

Og Oggilby
4.0 out of 5 stars Roy Wood and Jeff Lynne Heading Inexorably Toward The ELO
Reviewed in the United Kingdom on 3 June 2016
Verified Purchase
This, The Move's third album, is one of the heaviest, musically speaking, that they ever recorded. By then, their line-up had been graced by the induction of Jeff Lynne, pointing the way to the ultimate formation of the Electric Light Orchestra (ELO) in 1972. The band line-up comprised ROy Wood (Vocals, various instruments), Jeff Lynne (vocals, keyboards, guitars), Rick Price (bass) and Bev Bevan (drums). They still had one foot in the Pop charts, with the delightfully lumbering 'Brontosaurus', and the failed, but very ambitious single 'When Alice Comes Back To The Farm'. Other tracks including the heavy-as-lead title track, and Jeff Lynne's fabulous 'What?', which goes through various changes of mood and tone. There's also the superb 'Open Up Said The World At The Door', furiously busy with Roy Wood playing loads of different instruments. Not all of it is great - 'Feel Too Good' goes on a bit too long, and the bonus tracks are worth having, but inessential. The sound mastering quality is excellent, as is the packaging, making this the best version of 'Looking On', an album that has been reissued several times.
Read more
4 people found this helpful
Report abuse

RWW
5.0 out of 5 stars Roy Wood & Jeff Lynne - The Move's "Looking On" A GREAT GREAT ALBUM!
Reviewed in the United Kingdom on 6 October 2017
Verified Purchase
This is my personal all-time-favourite-album, most heard and I love it since I first heard it in 1980. The experimental steps of Roy Wood & Jeff Lynne together lead into the (for me) most brilliant Rock'n Roll Band ever: The Electric Light Orchestra.
The Roy Wood title track "Looking On" is a very heavy and strong rock track, which nevertheless burns into your head after you listen to it for the first time. The slow Rock 'n' Roll number "Turkish Tram Concutor Blues" by Roy is a very good bridge to the first Jeff Lynne composition on the album called "What?". It's a an experimental one with many effects at the vocals but also on the instruments. It's not a real ballad, but a characterful slow track by the genius Jeff. Then follows the 2nd Single from The album called "When Alice Comes Back To The Farm". A Woody track which is pure Rock 'n' Roll ... very strange the short breaks by a cello - but great! Unfortunately the single didn't reach the charts and failed. Here ends the first side of the vinyl edition.

The second side starts with the second Lynne composition called "Open Up Said The World At The Door". Wow ... what a great tune! So much of different styles on it. Sometimes dark, sometimes funny. Classical elements going to psychodelic ones, changes in tempo, a drum solo of its best and nice and clear vocals most as a choir. After that the big Hitsingle "Brontosaurus" by Roy brings you back to real Rock 'n' Roll. Wonderful track, which is still one of my 5 favourites track ever! The album finished with the longest track. A Roy Wood Composition called "Feel Too Good". Jeff plays drums on that song - dunno why, but it rocks! Feel too good has a lot of folk style in it, maybe a little gospel, maybe a little ... don't know what. Listen to it :-) ... After the last track there is another little one called "The Duke Of Edinburgh's Lettuce" ... This is fun pure ... I love such surprises at the end of a record.

In that time there was another song. Not written by Roy or Jeff, but from the great guy and Move bass player Rick Price, who later founding Wizzard together with Roy. Rick wrote the b-side for the Single Brontosaurus. And the song had the title "Lightning Never Strikes Twice". A very very strong one! Unfortunately not on the album. Rick wrote that song together with Mike Sheridan.

That's it. From me 5 Stars for this wonderful album. A must have for every real rock and rock'n'roll fan!

Og Oggilby
5.0 out of 5 stars Marvellous Move
Reviewed in the United Kingdom on 13 June 2018
Verified Purchase
This 1970 album from The Move was the first to feature Jeff Lynne in the band, and he brought a certain Prog Rock element to their sound. It's a very varied album stylistically, going from the rifftastic hit single 'Brontosaurus', through to the Bluesy stomper (with added cello) 'When Alice Comes Back To The Farm', and Jeff Lynne's Lennonesque melancholy, 'What?', the frenetic 'Open Up Said the World At The Door', and the funky 'Feel Too Good'. It's great stuff, and points the way to the formation of the ELO, which would happen in 1971. It's a thrilling ride, and sounds splendid on this vinyl pressing.
Read more
Report abuse

Mr. J. Norris
5.0 out of 5 stars The missing link for ELO fans
Reviewed in the United Kingdom on 26 July 2016
Verified Purchase
I didn't know anything about this album until very recently and it is the missing link that joins The Move and Birmingham beat to ELO's early flourishes... It has a harder edge than you might imagine, definitely some of the Black Sabbath in this which is a surprise. Most of the lyrics are generally quite sixth form stuff but the arrangements are not. Surprise yourself and enjoy it.
Read more
3 people found this helpful
Report abuse
See all reviews
Get FREE delivery with Amazon Prime
Prime members enjoy FREE Delivery and exclusive access to movies, TV shows, music, Kindle e-books, Twitch Prime, and more.
> Get Started
Back to top
Get to Know Us
Make Money with Us
Let Us Help You
And don't forget:
© 1996-2020, Amazon.com, Inc. or its affiliates