This title is not currently available for purchase
Share 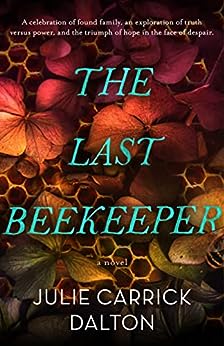 Julie Carrick Dalton's The Last Beekeeper is a celebration of found family, an exploration of truth versus power, and the triumph of hope in the face of despair.

It’s been more than a decade since the world has come undone, and Sasha Severn has returned to her childhood home with one goal in mind – find the mythic research her father, the infamous Last Beekeeper, hid before he was incarcerated.

There, Sasha is confronted with a group of squatters who have claimed the quiet, idyllic farm as a way to escape the horrific conditions of state housing. While she feels threatened by their presence at first, the friends soon become her newfound family, offering what she hasn't felt since her father was imprisoned: security and hope. Maybe it's time to forget the family secrets buried on the farm and focus on her future.
But just as she settles into her new life, Sasha witnesses the impossible. She sees a honeybee, presumed extinct. People who claim to see bees are ridiculed and silenced for reasons Sasha doesn't understand, but she can't shake the feeling that this impossible bee is connected to her father's missing research. Fighting to uncover the truth could shatter Sasha's fragile security and threaten the lives of her new-found family — or it could save them all.

The Last Beekeeper is a celebration of found family, an exploration of truth versus power, and the triumph of hope in the face of crisis. Sasha's journey is a meditation on forgiveness and redemption and a reminder to cherish the beauty that still exists in this fragile world.

Also by Julie Carrick Dalton:
Waiting for the Night Song

Money with Jess: Your Ultimate Guide to Household Budgeting
Learn how to get money, how to spend it and how to save it. Shop now

Praise for Waiting for the Night Song:

"A riveting and heartbreaking coming of age story... fans of Delia Owens will swoon to find their new favorite author." --Hank Phillippi Ryan, USA Today bestselling author of The First to Lie

"A fresh and engaging tale." --Kelli Estes, USA Today bestselling author of The Girl Who Wrote in Silk

"A killer, gorgeous debut that tackles love, racism and even climate change. Waiting for the Night Song will break your heart, leave you breathless and wanting more." --Rachel Barenbaum, bestselling author of A Bend in the Stars

As a journalist, JULIE CARRICK DALTON has published more than a thousand articles in The Boston Globe, BusinessWeek, The Hollywood Reporter, and other publications. She contributes to DeadDarlings, The Writer Unboxed, and GrubStreet's writer's blogs. She also owns and operates a small farm in rural New Hampshire, the backdrop for Waiting for the Night Song, her debut. --This text refers to the hardcover edition.