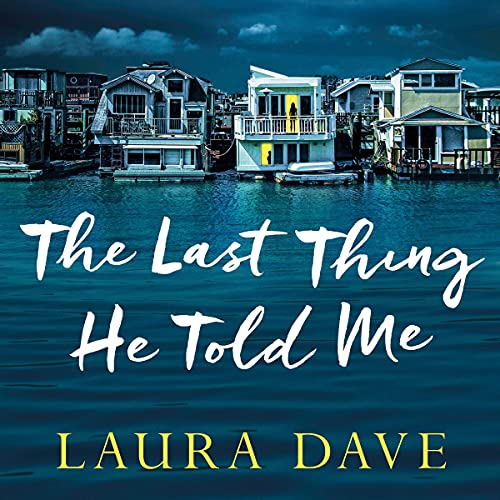 The Last Thing He Told Me

It was the last thing he told me: protect her.

Before Owen Michaels disappears, he manages to smuggle a note to his new wife, Hannah: protect her. Hannah knows exactly who Owen needs her to protect - his 16-year-old daughter, Bailey, who lost her mother tragically as a child. And who wants absolutely nothing to do with her new stepmother.

As her increasingly desperate calls to Owen go unanswered, his boss is arrested for fraud and the police start questioning her, Hannah realises that her husband isn't who he said he was. And that Bailey might hold the key to discovering Owen's true identity and why he disappeared. Together they set out to discover the truth. But as they start putting together the pieces of Owen's past, they soon realise that their lives will never be the same again....

A beautiful and thrilling mystery, perfect for fans of Lianne Moriarty and Celeste Ng.

Switch between reading the Kindle book & listening to the Audible narration with Whispersync for Voice.
Get the Audible audiobook for the reduced price of $30.38 after you buy the Kindle book.
Learn more about membership
By completing your purchase, you agree to Audible’s Conditions Of Use and Privacy Notice.
Sold and delivered by Audible, an Amazon company
Share

4.1 out of 5 stars
4.1 out of 5
20,762 global ratings
How are ratings calculated?
To calculate the overall star rating and percentage breakdown by star, we don’t use a simple average. Instead, our system considers things like how recent a review is and if the reviewer bought the item on Amazon. It also analyses reviews to verify trustworthiness.

Sue Hogg
5.0 out of 5 stars Well written, good plot
Reviewed in Australia on 20 July 2021
Verified Purchase
The writing style of this book kept me interested, the author knows how to tell a story.
I enjoyed the plot because it moved along sensibly and believably. I do not enjoy mysteries that use concocted drama to create a false tension. The only time I thought this may be happening, it turned out to be a logical progression in the plot.
I did find the ending satisfying and believable. Good book.
Read more
2 people found this helpful
Helpful
Report abuse

Vivien J Sonego
5.0 out of 5 stars A real page turner from the get go
Reviewed in Australia on 1 September 2021
Verified Purchase
A newly married wood turner comes home from work to be told by a teenager she’s never met that her husband isn’t coming home. How she navigates this news with her step daughter with whom she is deeply unpopular, together with breaking news of the fraud scandal at her husband’s place of work is a deft and diverting thriller which you’ll want to read in one sitting. A great lockdown read.
Read more
One person found this helpful
Helpful
Report abuse

Amazon Customer
5.0 out of 5 stars Amazing
Reviewed in Australia on 10 May 2021
Verified Purchase
I couldn't put the book down! I was hooked from start to finish! Stayed awake until 3am just to finish it! A must read.
Read more
3 people found this helpful
Helpful
Report abuse

Lorraine
5.0 out of 5 stars SO GRIPPING
Reviewed in Australia on 18 September 2021
Verified Purchase
SO UNDERSTANDING OF THE IMPACT THAT LOSING A PARENT CAN HAVE ON A CHILD. A PSYCHOLOGICAL THRILLER THAT IS SO WELL TOLD YOUR INTEREST IS HELD EVERY MINUTE.
THE MAIN CHARACTER IS SO ASTUTE. HER EMPATHY IS SO BELIEVABLY GROUNDED IN HER OWN EXPERIENCE AND HER INTELLIGENCE. SHE OUTWITS THE MAIN PLAYERS IN THE DRAMA OF THE STORY BASED ON HER INNATE GOODNESS AND HER BELIEF IN HER UNDERSTANDING OF THE MAN SHE LOVES.
Read more
Helpful
Report abuse

Marilyn
5.0 out of 5 stars Yep, it's a good one
Reviewed in Australia on 8 June 2021
Verified Purchase
A book with an ending that is not predictable. Not tied up in a moralistic bow, the storyline was fast thought provoking and interesting. What would I do in a situation like this, would I be clear thinking enough to understand the choices. I will remember this book. Thank you Laura.
Read more
One person found this helpful
Helpful
Report abuse

Erin
5.0 out of 5 stars Good page turner
Reviewed in Australia on 21 November 2021
Verified Purchase
Great read, really enjoyed the book. I had it on audio and couldn't wait to see what happened (I only listen to audio on the car) so bought the book so I could read it quicker! I hadn't read Laura Dave before but will be looking into her other books now
Read more
Helpful
Report abuse

orchid girl
5.0 out of 5 stars A really good book!
Reviewed in Australia on 28 May 2021
Verified Purchase
This is an interesting story that keeps you interested the whole time. Not extremely fast paced but captivating enough to want to keep reading.
Read more
One person found this helpful
Helpful
Report abuse
See all reviews

Gordon Russell
1.0 out of 5 stars Did Reese really read this book? I have my doubts.
Reviewed in the United States on 19 May 2021
Verified Purchase
This has got to be the most surprising disappointment of a book. Who are all these 5 star reviewers? The writing was boring, the characters flat, it was repetitive, contrived.. The author created suspense by basically not telling you anything forEVER. And the daughter whom the protagonist, Hannah, was to protect? Complete brat. She was just miserable ALL THE TIME and yet, Hannah, to the point of obsequiousness, is constantly trying to win her over and every page has some melodramatic prose about her heart breaking wide open or being thrilled with the slightest act of grace from the obnoxious brat in need of protection. Why was daughter so entitled to be miserable and rude while being raised by doting dad in Sausalito of all places? Dad just shrugs, Hannah tries harder because she is, IDK, spineless? But wait until you get to the part where we find out what daughter is being protected from! It's so absurd, so implausible that hurling book at wall seemed reasonable. Hannah is just a constant pillar of deep introspection and moral superiority. She's going to devote her whole life to said brat. Also, Grady, the US Marshall character? No! No, he would not have spent over a decade personally invested in the life of the son-in-law of an ex con and he most certainly wouldn't have worn a baseball cap on backwards in every appearance he makes in the novel. What grown man in law enforcement walks around in his professional life with a baseball cap on backwards? Was that supposed to be charming? Because I see that backwards cap on any man's head and I want to knock it the heck off.

The only pleasure I got out of this book is the cathartic experience I'm having writing this review and arriving at the sound decision of never buying a Reese Witherspoon book club pick again. And if she produces or stars in the film or series version, I'll never forgive her or watch Walk the Line again for like the 12th time.
Read more
1,781 people found this helpful
Report abuse

EMM
3.0 out of 5 stars Suspend Disbelief
Reviewed in the United States on 7 May 2021
Verified Purchase
I never liked books where you’re asked to suspend your disbelief and this is one of them. They lost me when they went looking for Owen in Austin, TX. I have so many “why” questions... would Bailey really want to have a relationship with her grandfather after what he’s done to her father? Would a woman give up her husband to save his daughter? Why didn’t they just leave the country together? So many questions.
Read more
468 people found this helpful
Report abuse

SL Hoops
3.0 out of 5 stars Calling an editor
Reviewed in the United States on 8 May 2021
Verified Purchase
Since I’m only just starting this book, I will give it 3 stars for now based on the two editing errors I’ve already stumbled over: 1) “She leans in and puts the whole bite in her month.” Month? And 2) “And I feel happy, for a just a second.” For a just a second?
Read more
445 people found this helpful
Report abuse

Vicci Katsiginis
3.0 out of 5 stars Underwhelming
Reviewed in the United Kingdom on 15 May 2021
Verified Purchase
This was a fast-paced read, it was quite gripping and I finished it quickly. But there were fundamental issues like
1. The lack of suspense- even though the story has promise, it’s not really exciting. There’s no antagonist chasing Hannah (main character) trying to cover the truth or any meaningful confrontation
2. It didn’t seem believable- it just so happens that the main character (a wood turner) is also a mock detective with killer instincts, ALL of which work out in this book. Not one wrong turn. Recalling and deciphering a memory from months and sometimes years ago. It all happened far too easily to seem plausible, and there was no real chase. Hannah discovers everything within two days (the majority of the book taking place in 3-4 days)😕
3. The flat ‘climax’ in which we find out what happened to Hannah’s husband and his ‘sordid’ history- This was so uncreative and not really all that interesting. When I read this ‘plot twist’ I thought ‘is that it? That’s all??’

It is an easy read and it was intriguing but I kind of finished it going ‘meh’. I would never recommend this to a friend saying ‘oh my gosh this book is so amazing, you should definitely read it’.
Read more
9 people found this helpful
Report abuse

Amazon Customer
1.0 out of 5 stars Rubbish
Reviewed in the United Kingdom on 29 May 2021
Verified Purchase
Sorry, I really fail to see how this has so many good reviews. I kept reading waiting for the twist, waiting for the big thing to happen and it never did. Waste of my time, don’t bother with this one.
Read more
8 people found this helpful
Report abuse
See all reviews
Back to top
Get to Know Us
Make Money with Us
Let Us Help You
And don't forget:
© 1996-2021, Amazon.com, Inc. or its affiliates