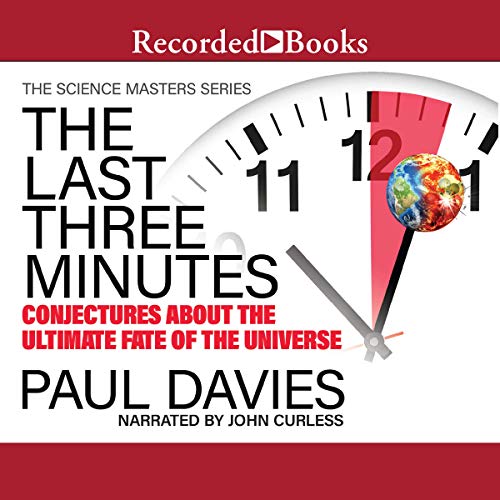 The Last Three Minutes: Conjectures About the Ultimate Fate of the Universe

4.6 out of 5 stars
4.6 out of 5
19 global ratings
How are ratings calculated?
To calculate the overall star rating and percentage breakdown by star, we don’t use a simple average. Instead, our system considers things like how recent a review is and if the reviewer bought the item on Amazon. It also analyses reviews to verify trustworthiness.

Daniel
4.0 out of 5 stars Well executed except....
Reviewed in the United States on 9 October 2019
Verified Purchase
This book was very readable and contained many interesting possibilities for the beginning, middle and end of the universe. The one issue I had with the book was the minimal time spent explaining the last three minutes. I felt that information was rushed or not developed as well as the other areas of the book. Perhaps my novice level makes me want more depth when perhaps no expansion of the theories are currently developed. I was just expecting more about the last three minutes due to the title.
The information that was provided in the book was well researched and explained- if you are interested in physics, astronomy, origins of life and the future of the universe, I highly recommend the book.
Read more
Report abuse

Dale Adams
5.0 out of 5 stars Fascinating Read
Reviewed in the United States on 1 January 2020
Verified Purchase
Fascinating read, well written and entertaining as well as informative. You may agree or disagree with his conclusions, but this book is well worth your time (as are his other books) if you're interested in the origins, and possible fate of this universe.
Read more
Report abuse

nancy andronikidis
5.0 out of 5 stars Great book, lots of different views.
Reviewed in the United States on 5 October 2016
Verified Purchase
Very well written, I love the fact that it has different scenarios and different ways of looking at possibilities that things might end. I would recommend this book to anybody
Read more
One person found this helpful
Report abuse