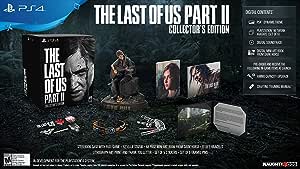 The Last of Us Part II Collector's Edition for PlayStation 4

4.8 out of 5 stars
4.8 out of 5
782 global ratings
How are ratings calculated?
To calculate the overall star rating and percentage breakdown by star, we don’t use a simple average. Instead, our system considers things like how recent a review is and if the reviewer bought the item on Amazon. It also analyses reviews to verify trustworthiness.

Cache
5.0 out of 5 stars You’re letting you’re political ideology get in the way of enjoying a 5/5 game? Get over yourself !
Reviewed in the United States on 22 June 2020
Edition: Collector'sVerified Purchase
I see so many downvotes for this game because the great people over at naughty dog decided to take risks in terms of player V character relationships. Is having unique and interesting characters and story Arc ever a bad thing ? Most of you should have already known what the game is trying to convey and I think leaving a bad review because you can’t agree with it on a personal level is not a review at all. Art is supposed to be subjective people, but you can’t honestly tell me you stopped playing and gave it 0/5 because you didn’t particularly like someone’s orientation. Like wtf? Get over yourself.

Vincent
5.0 out of 5 stars Story Driven Masterpiece
Reviewed in the United States on 20 June 2020
Edition: Collector'sVerified Purchase
Continuation of the first game (in case you can't tell from the title). Core gameplay is the same, but they've added more mobility and enhanced enemy AI to make for a more realistic scenario. Still story driven game. Has linear progression, and is not full open world similar to first game, but the levels are larger and if you explore you get more rewards/resources. Integration of story and gameplay is really good and gets you immersed in the world

Story takes place 5 years after the first game where Ellie and Joel are now in a safe community and has settled down in Jackson, Wyoming.

Main focus is on Ellie this time around, but you play multiple characters getting there perspectives through timeline jumps/flashbacks. Starts off with Ellie trying to uncover the truth about what happened at the end of the Last of Us (part 1) then it goes into revenge quest as opposing groups gets involved.

Character development and motivation are realistic seeing the situation/mindset they're in. As you play, you question if Ellie's motives are rational or not, seeing her lust for revenge The Punisher (Marvel) style. Amazing emotional experience when you couple it with gameplay.

Graphics and audio are really good. Very high production value. A lot of environmental detail (foliage, snow dropping down tree branches as you pass them) and realistic facial expressions. Sound track and ambient sound are excellent; best played with headset or 5.1 surround sound.

Able to adjust individual difficulty settings: Overall, Player, Enemies, Allies, Stealth and Resources from very light to survivor difficulty. There are 60+ settings, vision and visual accessibility for those who have disabilities. Even if you don't have disabilities, you can take advantage of them for combat or finding collectables

Evade mechanics for hand-on-hand battles. Dodge animation change depending on enemies attack and angle they swing their weapon

Ellie learned to swim this time, but a boat is required traverse large body of water

Able to squeeze trough gaps while standing or go prone on her stomach.

Can break windows via bricks or melee attacks

If hit by arrow, it'll be harder to aim and disable listen mode until you stop and take arrow out

Dog enemies have sense of perception. You must worry about their scent and can't stay in one place for long

There are new enemy infected types

AI communicate better. They call out each other by name and mourn for them or get angry/aggressive when you kill them

There are more craftable items, must decide what to craft due to limited resources given

There are expanded skill trees like precision, survival, crafting, stealth. To get new skills you must collect pills and to expand skill tree you must collect survival magazines. You cannot upgrade everything in one playthrough(or at least from my experience, may be I didn't explore as much) so you have to pick-and-choose.

This time you collect hero cards instead of comic books

Level design in this game is really good. Levels are more larger than the first game, giving different branching paths to reach your set destination. There is much fewer environmental puzzles this time around (maybe because Ellie can swim now lol); makes the game flow more smoother

Has a New Game Plus

Overall one of the best games on the PS4. Defining game of this console generation
Read more

Aucifer
1.0 out of 5 stars Nothing like the first
Reviewed in the United States on 21 June 2020
Edition: Collector'sVerified Purchase
Graphic are beautiful but after reading reviews and watching bits of the game ' PewDiePie ' i came to the conclusion I'll rather cancel my order and make believe it ended with part one. I hate it how big companies try a pleased stupid groups of people and end up destroying something so amazing. I won't name those groups because I'm not trying to bring negative attention to my go place where i shop the most. Amazon already has enough trying to pleased those stupid groups and all the negative attention from the media.
Read more
52 people found this helpful
Report abuse

Sterling Malory Archer
5.0 out of 5 stars Best Game ever.
Reviewed in the United States on 20 June 2020
Edition: Collector'sVerified Purchase
10/10 It evokes emotions you didn't know you could have for a video game such as anger.
Read more
39 people found this helpful
Report abuse

maou
5.0 out of 5 stars An amazing game, with an excellent story and unexpected twists.
Reviewed in the United States on 21 June 2020
Edition: Collector'sVerified Purchase
Update (20.06.24): After finishing my second playthrough, I still love this game. The controversial sequence at the beginning still evokes so much emotions, especially considering all the flashbacks that played out until the end. It still motivated me to on my quest through Ellie's playthrough. The second half of the game is a bit weaker in terms of plot and I understand what Druckmann was attempting to do with Abby. However, the story falls short of doing this by making her a less likeable character than nearly all the characters in the story. Her motivation, similar to Ellie's, is very single-minded and her character flaws do not do her any favors. Even after all her growth, she fails to see how her choices led to some of the most horrific moments in the game and even at the end the player is unsure about whether or not she realizes her mistake.

Ellie, on the other hand, demonstrates growth throughout the series and while the ending left me wanting more, this was a similar feeling I had with Last of Us.

I will agree that the game is not for everyone and it does have a darker tone than the first one. There are still happy moments (i.e. a lovely birthday scene) that I'm convinced was one of the best levels I have played in the entirety of my gaming life. The Last of Us: Part II is by far one of the best written games I have played and I look forward to seeing what Naughty Dog intends to do with it in the future. SUPER DUPER HIGHLY RECOMMENDED.

ORIGINAL REVIEW: There are a lot of upset people who have reviewed the game. Amazon has restricted reviews to verified purchases, but this is easily circumvented by purchasing and returning (like I did). I managed to snag an Ellie Edition last minute, but I'm still allowed to review.

After finishing the game, I can say that it truly is an amazing game. There are some things I am not happy about, but I accept that is just how it is. The same happened for Last of Us, but I could understand why after several dozen playthroughs.

The same goes for LoU2... I will play it a second time through before leaving a thorough review. The graphics are amazing with a few points where models could have been better. The gameplay is great, but a little frustrating since it doesn't play as quickly as LoU in some regards. AI is better and can be more challenging even on Normal.

The story is where the game shines, but I would be lying if I said I am 100% in love with it. I feel like I'll get a better perspective after another playthrough.

In short, this game is my game of 2020. I would rate it 4.7 out of 5 and HIGHLY RECOMMEND it. Just be careful not to tell anyone that or they might accuse you of being a socialist. 😂
Read more