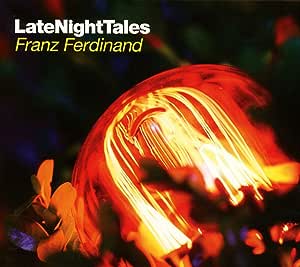 Franz Ferdinand are welcomed into the Late Night Tales family with a diverse 20 track selection of musical influences, inspirations, diversions and discoveries. The quartet have released four studio albums including their 2004 self-titled debut album, which went gold just about anywhere with a record store, as well as nabbing the Mercury Music Prize and a pair of Brits for Best British Group and Best British Rock Act. They've subsequently gone on to release You Could Have It So Much Better, Tonight: Franz Ferdinand and last year's Right Thoughts, Right Words, Right Action. Announcing itself with Franz Ferdinand's own exclusive cover version of the hugely collectible 'Leaving My Old Life Behind', originally performed by Jonathan Halper, (which appeared on the cult Kenneth Anger movie Puce Moment), their Late Night Tales mix flows between dark and light, introspection and affection, dancing and horizontal appreciation. Hear them join the dots between Can, Serge Gainsbourg and the West Coast Pop Art Experimental Band, Sandy's Nelson's percussion work-out 'Let There Be Drums', the irrepressible Ian Dury, funky sensations Zapp and the Disco Dub Band and sonic explorer Lee 'Scratch' Perry. It wouldn't be right for Franz Ferdinand to produce a mix such as this without a nod to the country that brought them together, so Glasgow's Life Without Buildings, whose uplifting 'New Town' appears alongside 'Reach for the Dead' by Boards of Canada. As they leave US wondering and wandering with American Spring's Brian Wilson-produced ' Sweet Mountain ', we take leave of our senses and suitcases on this tour bus of your mind. We've visited soul, funk, reggae, pop, Krautrock and others besides, but before we depart, Franz frontman Alex Kapranos provides a final farewell with the self penned story 'Defibrillator'.

4.2 out of 5 stars
4.2 out of 5
18 global ratings
How are ratings calculated?
To calculate the overall star rating and percentage breakdown by star, we don’t use a simple average. Instead, our system considers things like how recent a review is and if the reviewer bought the item on Amazon. It also analyses reviews to verify trustworthiness.

Gas balls
5.0 out of 5 stars 5 stars
Reviewed in the United Kingdom on 27 September 2014
Verified Purchase
These Late Night Tales albums are always an interesting listen into the minds of the bands/artists who put them together, Ian Dury to Boards Of Canada on the same album gets my vote! great sequencing and you get unmixed tracks from the CD download code... an all round great purchase....recommended
Read more
One person found this helpful
Report abuse


Read more
7 people found this helpful
Report abuse
Translate review to English
See all reviews
Get FREE delivery with Amazon Prime
Prime members enjoy FREE Delivery and exclusive access to movies, TV shows, music, Kindle e-books, Twitch Prime, and more.
> Get Started
Back to top
Get to Know Us
Make Money with Us
Let Us Help You
And don't forget:
© 1996-2020, Amazon.com, Inc. or its affiliates