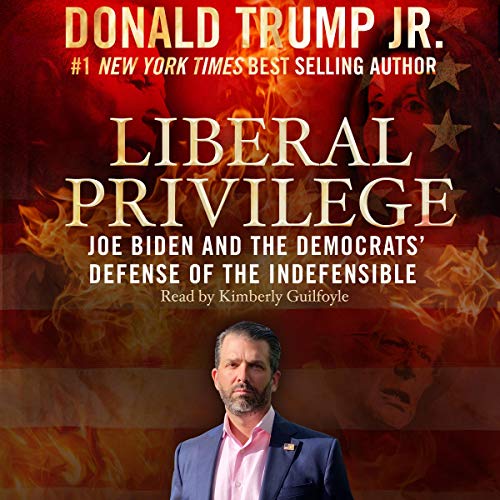 Liberal Privilege: Joe Biden and the Democrats' Defense of the Indefensible

4.8 out of 5 stars
4.8 out of 5
2,265 global ratings
How are ratings calculated?
To calculate the overall star rating and percentage breakdown by star, we don’t use a simple average. Instead, our system considers things like how recent a review is and if the reviewer bought the item on Amazon. It also analyses reviews to verify trustworthiness.

There are 0 reviews and 5 ratings from Australia

Carolyn
5.0 out of 5 stars A great summary!
Reviewed in Canada on 13 September 2020
Verified Purchase
Don Jr. brings the facts together in a helpful summary. It was an enlightening and entertaining read. Thank you Don!
PS - I miss Kimberly on The Five SO MUCH!!
Read more
5 people found this helpful
Report abuse

Amazon Customer
1.0 out of 5 stars A terrible book full of lies
Reviewed in the United States on 14 September 2020
Verified Purchase
I ordered this to see what the hype was about and I was shocked by the amount of misinformation in it. Nepotism is so dangerous normally but factor in the highest office in the land and you really have a problem. If you do choose to order and read this book just take it with a grain of salt.
Read more
126 people found this helpful
Report abuse

AB
3.0 out of 5 stars Interesting and thought provoking read
Reviewed in the United States on 1 September 2020
Verified Purchase
I think it’s important to hear both sides of any issue or debate. Often in this country, we see people living in an echo chamber (the mainstream media is an excellent example of this). Don Jr., who also clearly wants his father re-elected (and I fully respect and understand that), does bring up some excellent points about Joe Biden, that aren’t discussed in most media outlets. It was definitely a thought provoking book, and I would recommend reading it to anyone for a different perspective than what you generally hear or read in the mainstream news.
Read more
72 people found this helpful
Report abuse

Alvin Rupp
5.0 out of 5 stars But it ASAP
Reviewed in the United States on 3 September 2020
Verified Purchase
This book is a must read! Please educate yourself on America! We must Keep America Great! Thank you Don Jr. for giving us the facts! You and your family are true hero’s🇺🇸🇺🇸🇺🇸🇺🇸
Read more
53 people found this helpful
Report abuse

Matilde Aguirre
5.0 out of 5 stars A must read before this election
Reviewed in the United States on 3 September 2020
Verified Purchase
Never in my wildest dreams would I have imagined that many in our precious America would be ignorantly considering turning this wonderful country into a socialist hell. Joe Biden is exposed here in great detail for who he truly is and represents. I recommend reading this book before you cast your vote.
Read more
47 people found this helpful
Report abuse
See all reviews
Back to top
Get to Know Us
Make Money with Us
Let Us Help You
And don't forget:
© 1996-2021, Amazon.com, Inc. or its affiliates