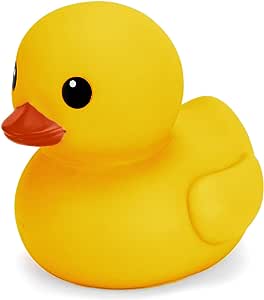 There was a problem adding this item to Cart. Please try again later.
We do not have any recommendations at this time
Continue shopping
Share

Brand: Liberty Imports
4.6 out of 5 stars 960 ratings
Available from these sellers.

A Jumbo Rubber Duck for Big Fun! The jumbo rubber ducks are a great solution when you need more fun in the tub, or when you want a large size duck race or duck pond game. This duck squeaks when pressed. Can be used for bathtub and pool, but does not Float Upright. This rubber duck is great for decorations, party favors or give away. Duck measures 7.5"L x 5.5"W x 6.5"H. For children 3 and up.

4.6 out of 5 stars
4.6 out of 5
960 global ratings
How are ratings calculated?
To calculate the overall star rating and percentage breakdown by star, we don’t use a simple average. Instead, our system considers things like how recent a review is and if the reviewer bought the item on Amazon. It also analyses reviews to verify trustworthiness.

Chelsea Passmore
5.0 out of 5 stars Apparently computer science/coders use rubber duckies...
Reviewed in the United States on 15 September 2018
Colour: YellowVerified Purchase
So my husband, the mature 25-year-old college graduate, full-time working man that he is, decided he needed this gigantic duck.

Why? Well, in the "coder" world, a world full of computer programmers and "languages" us mere mortals cannot comprehend, they talk to rubber duckies. That's right, that's something that they do.

On the oh-so-rare occasion that a programmer is stuck, which I've heard from insiders is not-so-rare, sometimes they will try to talk through their problems to an object. Specifically, the favored item of choice, is the rubber ducky. ("Rubber ducky, you're the one...")

I've heard that this has actually become a topic of conversation in the programmer world that people do indeed have opinions on. Some companies will give you a rubber ducky when you start with onboarding to talk to. Other companies, due to the fact that rubber duckies have been known to FLY (i.e. are thrown), have banned this technique.

So my husband, the overachiever that he is, has decided to take online courses on whichever coding languages the master computer science gods dictated he should. (Honestly, he was just brushing up on Python so far.)

Because of this, he decided that he, approaching frustrating problems AND taking them on voluntarily after hours, should have a rubber ducky to talk to. But not just ANY rubber ducky. This gigantic rubber ducky.

So, on our bedside table (because why not right), this little guy has found his home. He sits by our lamp - which I should add is a color changing lamp. Sometimes the ducky looks quite questionable in the red-light of the lamp...

So, overall review - my programmer husband LOVES the ducky and all of its mighty glory. I'm chill with sharing my home with it - just maybe not sitting next to a color-changing red light on red...

Lucien
5.0 out of 5 stars Lost but not forgotten
Reviewed in the United States on 3 December 2019
Colour: YellowVerified Purchase
I bought this "little" guy to go on the back seat of my sports bike as a joke. Lone behold it brought many smiles to people in my mirrors, but at last... On a late night trip to the store he was lost at some point in time. I spent hours looking for this large rubber duck but my searches turned up empty. He was a good, Noble guard duck who stood through the Florida sun and rain. He will be missed RIP.
Read more

Jordan
5.0 out of 5 stars Engineering Student's Best Friend
Reviewed in the United States on 23 January 2019
Colour: YellowVerified Purchase
I'm an engineering student and we were required to have a partner for our lab. My partner was no better than a bag of sand. I bought this little guy and brought him to lab. The TA allowed the duck to be my partner for the rest of the semester and I ended up getting a 99% in the lab. I love this duck!!!
Read more
19 people found this helpful
Report abuse

Gina E.
5.0 out of 5 stars Wonderful and Hilarious
Reviewed in the United States on 6 May 2018
Colour: YellowVerified Purchase
So my daughter has a collection of rubber ducks. And so I though why not get a giant one. At first she was skeptical but then she fell in love with it. What is didn’t know that is rubber duck does not squeak. It quacks. A hilarious quack. And so we would end up chasing my daughter through the apartment while having it quack at her.

I would not advise putting it in the bath tub. You can w e did. It’s just a little bit of a pain to get the water out of stuff gets inside. And it doesn’t really float up. But it’s adorable and my one year old loves it.
Read more

Erica Seal
5.0 out of 5 stars So cute! The perfect size for my two year old.
Reviewed in the United States on 28 September 2016
Colour: YellowVerified Purchase
My two-year-old son is in love with Rubber ducks. So for his second birthday, we decided to order him a bigger version. He was used to the standard size bath toys from Infantino. He still loves his smaller ducks because he can clutch multiple ones easily. But likes to play with them all together. Setting them up in groups, placing them all in a row, etcetera. While bigger this Jumbo duck is still easy for him to carry around. It doesn't float without tipping but he still had fun with it in his toddler pool. It makes a deep yet loud squeaking sound. Which my whole family finds amusing. It is easy for an adult to remove the small squeaker if the sound bothers you or you need to empty/clean the duck. He still plays with it months later and the quality is great. It is holding up without visible wear.
Read more

7 people found this helpful
Report abuse
See all reviews
Get FREE delivery with Amazon Prime
Prime members enjoy FREE Delivery and exclusive access to movies, TV shows, music, Kindle e-books, Twitch Prime, and more.
> Get Started
Back to top
Get to Know Us
Make Money with Us
Let Us Help You
And don't forget:
© 1996-2020, Amazon.com, Inc. or its affiliates