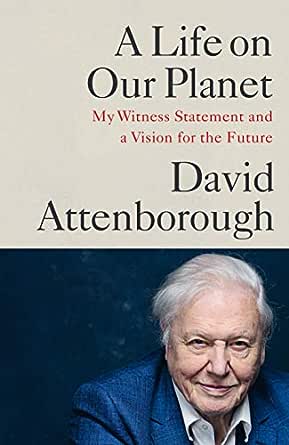 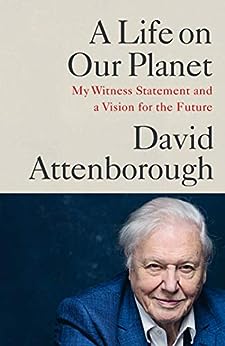 A Life on Our Planet: My Witness Statement and a Vision for the Future Kindle Edition

A legacy-defining book from Sir David Attenborough, reflecting on his life's work, the dramatic changes to the planet he has witnessed, and what we can do to make a better future --This text refers to an alternate kindle_edition edition.

Sir David Attenborough is a BAFTA and Emmy-Award winning broadcaster and natural historian. He is the internationally bestselling author of over 25 books, including Life on Earth. He also served as controller of BBC Two and director of programming for BBC Television in the 1960s and 1970s, and as the President of the Royal Society for Nature Conservation in the 90s. Jonnie Hughes is a science writer and documentary director, who has produced science and natural history films for the BBC, Discovery, National Geographic, and Netflix, as well as working on BAFTA award-winning BBC series The Hunt and the Emmy award-winning production Our Planet. He is the author of On the Origin of Tepees, and his writing has appeared in The Times, The Guardian, The Independent, BBC Wildlife Magazine, and Geographical, among others. --This text refers to an alternate kindle_edition edition.

"The eminent traveler and naturalist delivers a combination of memoir and manifesto, the first leisurely, the second earnest....Recognizing that we are at a tipping point, Attenborough is refreshingly optimistic, noting that one thing humans do well is solve problems. Anyone concerned with the planet's ecological future will want to spend time with this excellent book."--Kirkus Reviews, starred review
--This text refers to an alternate kindle_edition edition.
Read more

4.9 out of 5 stars
4.9 out of 5
856 global ratings
How are ratings calculated?
To calculate the overall star rating and percentage breakdown by star, we don’t use a simple average. Instead, our system considers things like how recent a review is and if the reviewer bought the item on Amazon. It also analyses reviews to verify trustworthiness.

Old Sailor
5.0 out of 5 stars A Warning for the Future
Reviewed in Australia on 15 November 2020
Verified Purchase
This revealing book warns us that unless changes are made, we will face trouble by 2060. It was surprising to learn that one of the main causes of climate change has been the reduction of natural forests to make grazing land for cattle, and that we will have to reduce our consumption of animal products in the future.
David Attenborough reminds us of one good achievement, the big reduction in the mass slaughter of whales which commenced in the 19th century through to the mid 20th century. He also says we will have to practice conservation of seafood in the future. An amazing book from a renowned author, now in his nineties !

Tim O Dowd
4.0 out of 5 stars Conversion to plant based eating is a mistake
Reviewed in Australia on 29 October 2020
Verified Purchase
Important legacy from a special observer of planet Earth. However I hope Sir David has not been led astray regarding the potential benefits of chemical replacement foods for meat. Industrial farming practices are a major concern also humans addiction to consumerism
Read more
2 people found this helpful
Helpful
Comment Report abuse

Watcher
5.0 out of 5 stars Attenborough slams home the realities and leads us toward a sustainable future.
Reviewed in Australia on 3 November 2020
Verified Purchase
Frightening, edifying, empowering. As always, Attenborough provides the unvarnished truth but also hints at reasons for optimism. Read this superbly written book, increase your knowledge and take up the fight against our government of fossil fools who remain in the thrall of the money in fossil fuels. The world as we know it is at stake and Attenborough has given us some of the tools we need to win the battle we can't afford to lose.
Read more
Helpful
Comment Report abuse

Mirella Marie
1.0 out of 5 stars Books should be checked before dispatch
Reviewed in Australia on 13 November 2020
Verified Purchase
The cover had a mark on the cover another gift with a fault so I bought two books both with faults very dissatisfied
Read more
Helpful
Comment Report abuse

David Hewish
5.0 out of 5 stars Profound and revealing
Reviewed in Australia on 9 November 2020
This is an amazing piecing together of what we have done to our planet and what we might need to do to fix it. Hard to be deeply unaffected. I never write reviews, this one deserved it.
Read more
Helpful
Comment Report abuse
See all reviews

James Riker
5.0 out of 5 stars David Attenborough at his best
Reviewed in the United Kingdom on 4 October 2020
Verified Purchase
It is rare for me to read, let alone purchase, a non-fiction book. However, anything David Attenborough related and I am immediately there!
I received the book yesterday and have been so engrossed by the content that I have already finished it.
To me the book felt like the right length; it went through what the problems are in clear language, and what the solutions are. The images and pictures were also nice little breathers as you are reading the book.
The evidence and predictions of what could happen if nothing changes is horrifying, but the solutions do give hope for the future, if they are implemented.
I hope that politicians everywhere are given a copy of this book and read it.
David Attenborough is quite rightly a hero to many people, myself included. It is amazing that he is 94 years old and still fighting hard to save the natural world, with this book and the related film his latest brilliant efforts.
He is an inspiration to us all and this book should be read by anyone that is a human and lives on planet earth!

Gee
5.0 out of 5 stars Interesting read
Reviewed in the United Kingdom on 4 October 2020
Verified Purchase
I think this is the only book I've finished in 15 years.

The book covers various aspects of how things used to be and have changed over the years. It covers sections on how we've extracted more and more from our surroundings over the decades to the current unsustainable levels.

I found the potential future options interesting to read because it outlines how the rest of our (and our kids) lives will be affected over the next 10-80 years or so.

It seems to also highlight how much our governments, banks and big corporations roles play into the state of our planet, how much we need them to change so that our individual choices can actually make a significant difference.
Read more
28 people found this helpful
Report abuse

papapownall
5.0 out of 5 stars If you don't believe Greta Thunberg...
Reviewed in the United Kingdom on 25 October 2020
Verified Purchase
Film-maker, natural historian and National Treasure David Attenborough has written a new book that is part memoir, part state of the World and part wake up call for us all to recognise the perilous state of the world resulting from the damage we have collectively done to the world's eco system. This is certainly not your usual Attenborough type book; while there are a few nice colour pages showing nice pictures of animals and some intricate pencil drawings, most of the pages are taken up by double spaced prose spelling out, in no uncertain terms, the potential impact of our actions and the deterioration of the ecology of the world during Mr Attenborough's 94 years life on Earth. There is a warning call to everyone that extrapolates what could well happen if current trends continue; and while the Leader of the Free World in the most polluting country on Earth actively denies that the problem even exists, it is a distinct possibility that these terrifying predictions could well come true; not that Mr Attenborough would be as insensitive to implicitly make this connection but the implication is there and will be understood by all who read this wonderful book. Despite these threats there is enough to be optimistic about and it is clear what needs to be done to avert further damage. There is not much that David Attenborough recommends that is different to what is being said by Greta Thunberg and we all need to listen to these messages. I suspect that the demographic for the readership of this book will not necessarily overlap with the, mostly younger, followers of Ms Thunberg; but if this book gets the message to an older generation then it will have done its job and Mr Attenborough;s efforts will have been worthwhile.
Read more
15 people found this helpful
Report abuse

Fishface
5.0 out of 5 stars YOU MUST READ THIS FOR YOUR KIDS AND GRANDKIDS SAKE.
Reviewed in the United Kingdom on 8 October 2020
Verified Purchase
Everybody on this planet should read this book. Its now the survival bible for the human race. Also survival for every living thing on this planet because of human activity . So YOU should read this and do your bit.
Read more
16 people found this helpful
Report abuse

Matthew Jones
4.0 out of 5 stars A great idea!
Reviewed in the United Kingdom on 17 October 2020
Verified Purchase
A 'minor keyed' encore from the worlds most loved naturalist. A short sharp reminder of the damage we have done to the planet, and the changes required to save it.

Like his Netflix program (and others), this is part of a new, and much needed trend of highlighting the issues we face as a result of our greed and consequent destruction of the Earths natural ecosystems. Along with 'Game Changers' & 'The Minimalists', it shows a shift in thought and an ever-increasing acceptance of the problems we have caused, and will hopefully drive the change we need.

Personally, it's been refreshing to discuss the issues in the book with my 'normal' friends, showing that a new audience is being reached. Unlike the road-blocking XR 'crusties' who continuously make environmentalism unappealing to the general public, Attenborough delivers his message with the typical grace that has made him a household name.

I've given the book 4/5 purely because of the 'price-to-length' ratio. It is not a long read. Also, if you are already well versed in geography/environmental issues, you won't learn anything new. Either way, an important book, and a good read.
Read more
8 people found this helpful
Report abuse
See all reviews
Get FREE delivery with Amazon Prime
Prime members enjoy FREE Delivery and exclusive access to movies, TV shows, music, Kindle e-books, Twitch Prime, and more.
> Get Started
Back to top
Get to Know Us
Make Money with Us
Let Us Help You
And don't forget:
© 1996-2020, Amazon.com, Inc. or its affiliates