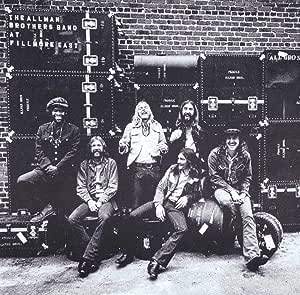 Secure transaction
Your transaction is secure
We work hard to protect your security and privacy. Our payment security system encrypts your information during transmission. We don’t share your credit card details with third-party sellers, and we don’t sell your information to others. Learn more
Details
Ships from
Amazon AU
Sold by
Amazon AU
Live At Fillmore East has been added to your Cart
New (10) from
$44.66 + FREE Delivery

Double LP 2008 reissue on 180-gram vinyl. Few live albums are as revered as The Allman Brothers Band's "Live at the Fillmore East." More than just the raw energy on stage and from the crowd, it is the electric, jazz-like interplay between the performers that sets a high bar for jam bands to reach. The impeccable rhythm blended with masterful instrumental work, keeps fans coming back for more. Most noteworthy are the dueling lead guitars of Duane Allman and Dickey Betts, and the instrumental byplay between Duane and his brother Gregg on the keyboards. Taken from a series of live shows in San Francisco recorded in March of 1971, "Live at the Fillmore East" was an instant classic. It became the band's high watermark, but was tragically followed by the motorcycle deaths of Duane and bassist Berry Oakley. This double vinyl reissue was pressed in 2008 on audiophile-quality, 180-gram vinyl.

4.7 out of 5 stars
4.7 out of 5
967 global ratings
How are ratings calculated?
To calculate the overall star rating and percentage breakdown by star, we don’t use a simple average. Instead, our system considers things like how recent a review is and if the reviewer bought the item on Amazon. It also analyses reviews to verify trustworthiness.

Mandrek Larl
5.0 out of 5 stars A slice of history and the template for southern blues rock ...
Reviewed in the United Kingdom on 8 August 2020
Verified Purchase
One of the few things that a distraction-free lockdown 2020 is giving me time to do is explore more music but that really means buy more music [if the Memsahib is reading this I promise I will grow up one day but as I'm now in my seventh decade don't expect it to happen any time soon and certainly not at the moment].

So while broadening my horizons and looking through lists of best [insert year/genre/format here] albums it occurred to me that I knew little by, or about the Allman Brothers Band with the exception of course of "Jessica" the "Top Gear" theme, but their 1971 "At Fillmore East" regularly tops these lists as best all-time live album, an omission that clearly needed remedying.

Now I don't normally like live albums viewing them as a kind of greatest hits set with unwanted crowd noise but "At Fillmore East" was an essential part of the Allman Brothers Band's development and their commercial breakthrough, hence yet another exception to my rules entered my Amazon basket.

So this morning I have the Allman's on heavy rotation and I find myself asking why have I only just come to the Allman Brothers Band and their "At Fillmore East" album. Still sounding fresh, if not perhaps as relevant as it was 50 years ago, and mercifully light on crowd noise allowing the listener to focus on the band's playing "At Fillmore East" was originally four side of vinyl although only seven tracks long, two of those tracks "You Don't Love Me" and "Whipping Post" each required a side to themselves.

But before we get to these, the album opens with it's most easily accessible side of "Statesboro Blues", "Done Somebody Wrong" and "Stormy Monday" with which the Allman's set out their southern rock credentials by playing some of the best rock blues you will ever hear. However sustaining interest, theirs and ours, over two twenty minute improvs would be a challenge for anyone (even Miles Davis!) and there are moments of noodling during the longer tracks that bring back memories of nodding-out at blues all-nighters in the Union Bar at Surrey Uni in the seventies, but persevere because these guys are good and its worth the noodling to hear their sound build as all members of the band re-engage following the solos.

But somewhere between the all too-short short tracks of the first side and the epic long tracks of sides two an four lies the excellent "In The Memory of Elizabeth Reed". Weighing-in at a mere [!] thirteen plus minutes and shorn of noodling "In The Memory of Elizabeth Reed" showcases the band at its best; yes this is the very essence of southern blues guitar rock, well-head from which many lighter-weight copies were once formed.

Recommended if you want to hear a slice of history or find the template for southern blues rock.
Read more
3 people found this helpful
Report abuse

Pete25
3.0 out of 5 stars Perhaps you had to be there...
Reviewed in the United Kingdom on 17 May 2020
Verified Purchase
It's ok but not for me. There are no great songs as such, just a loose framework for overlong, extended blues rock jamming. I bought it as it is rated by some as one of the greatest live albums ever, it's really not, I have given it several tries, but there comes a point when after 10 minutes or much longer of meandering guitar noodling when I just lose interest. Well played but not that exciting, maybe it's an American thing, perhaps they don't travel well, much like the Grateful Dead, or maybe it's just something you had to grow up with? Probably great if you were there on the night, interesting as an historical document, but I won't be keeping it.
Read more
2 people found this helpful
Report abuse

Warren
5.0 out of 5 stars BEST THING SINCE SLICED BREAD....
Reviewed in the United Kingdom on 17 May 2013
Verified Purchase
"Live At Fillmore East" is my favourite live recording of all time. Live jamming started right here. The live version of whipping post must be one of the most gut wrenching , beautiful & intelligent piece's of music my ears have ever heard. "Stormy Monday" WOW , "Elizabeth Reed" WOW. This is rocks version of classical music........So complex yet so easy to listen to. Had Duane lived I honestly believe that The Allmans could have gone on to be as big if not bigger than Led Zeppelin. Their line up was so talented without a single weak link. I just wished they would have stayed on the Rock/Blues path rather than being led too far into the country/rock scene by Dickie. Still my favourite band of all time.
Read more
2 people found this helpful
Report abuse

Engine Buff
5.0 out of 5 stars Cant say enough good things about this album !!!
Reviewed in the United Kingdom on 23 April 2014
Verified Purchase
IF....you havent managed to hear about this SUPER Rock N"Blues album....
RUN...to get it !!!
I bought this as an LP in the early 70s when it first came out....and IS one of my favourite pieces of music !!!
You will NOT be disappointed....EVERY track...GREAT !!
I NEVER get tired of this great piece of music ....neither will YOU !!
The Filmore East is gone now....and some of the band members shown on the album have passed away.
A TIMELESS piece of music !!!
Looked through my comments on this cd.....April 13 /20014
NEVER GOT PUT IN !!!!!...WHY??
Read more
One person found this helpful
Report abuse

Cappah
5.0 out of 5 stars Masterpiece
Reviewed in the United Kingdom on 3 November 2013
Verified Purchase
Out of my 700+ records...this has to be my favourite one. It is incredible, when I first listened to it I just turned off everything in the room and closed my eyes and listened in ore of how tight this band was and how in sync they were, and Duane will blow you away. In Memory Of Elizabeth Reed is incredible and moved me to tears the further it went through, that was Duane's masterpiece right there, just like Supernatural was Peter Green's. Buy this album, pull the curtains, turn off the tv, close your eyes and listen to a masterpiece and a genius at work. Peace

Rest In Peace Duane Allman
Read more
3 people found this helpful
Report abuse
See all reviews
Back to top
Get to Know Us
Make Money with Us
Let Us Help You
And don't forget:
© 1996-2021, Amazon.com, Inc. or its affiliates