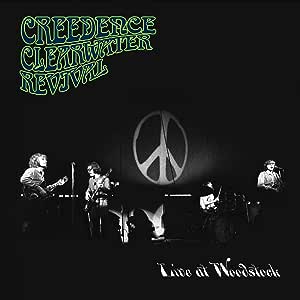 Secure transaction
Your transaction is secure
We work hard to protect your security and privacy. Our payment security system encrypts your information during transmission. We don’t share your credit card details with third-party sellers, and we don’t sell your information to others. Learn more
Details
Ships from
Amazon AU
Sold by
Amazon AU
New (12) from
$11.46 FREE Delivery on first order.

4.7 out of 5 stars
4.7 out of 5
1,068 global ratings
How are ratings calculated?
To calculate the overall star rating and percentage breakdown by star, we don’t use a simple average. Instead, our system considers things like how recent a review is and if the reviewer bought the item on Amazon. It also analyses reviews to verify trustworthiness.

Maurice J. Brett
5.0 out of 5 stars creedence clearwater revival live woodstock
Reviewed in Australia on 11 October 2019
Verified Purchase
why did it take 50 years to release Beggers Belief, I Should have been grooving to this at 19 not 67?
5 STARS AND BEYOND BUY IT!
Read more
One person found this helpful
Helpful
Report abuse

Chris
5.0 out of 5 stars Brilliant concert coverage
Reviewed in Australia on 31 January 2020
Verified Purchase
This CD is really brilliant. The live performance is outstanding and is a must for any Creedence fan.
Read more
Helpful
Report abuse

Alec Young
5.0 out of 5 stars CCR
Reviewed in Australia on 7 September 2020
Verified Purchase
Equal to the Beatles on the roof
Read more
Helpful
Report abuse
See all reviews

Another Reviewer
5.0 out of 5 stars It's about time!
Reviewed in the United Kingdom on 3 August 2019
Verified Purchase
I think John Fogerty /CCR refused to allow this performance to be used on the OST because they didn't like the sound quality and it's not perfect, but it's chooglin' and doesn't need to be ultra hi-fi. You hear JF complain that his monitors weren't working, but he still sounds great. He has one of the best rock voices ever. CCR were a great band and then they were gone. They left us with two bona fide masterpieces in Cosmo's Factory and Green River and now we have the Woodstock performance to take us back to our youths. Keep on chooglin'
Read more
42 people found this helpful
Report abuse

J. Talsma
5.0 out of 5 stars finally and at last exicting performance on CD available
Reviewed in the United Kingdom on 15 August 2019
Verified Purchase
Creedence, as quartet, performed on 17 august 1969 (!), half a century ago now, on Woodstock and played a rousing set, culled from the first three studio albums, the nameless debut, Bayou Country and Green River. Why this is released so long time thereafter is beyond me, because the sound quality, measured to the standard at that time, is solid while the set list is superb, with extended versions of You Put a Spell on Me and Keep on Chooglin', plus the encore Suzy Q. From the heydays of CCR as a live act remind only 2 albums, when all 6 (as quartet) resp. 7 (the last one as trio) studio albums where released in 1973 and 1980, The Concert and Live in Europe, when the band already/long was ended, but how good they may be, somewhat polished/more produced, , this raunchy show is the better one and includes the songs Bootleg and Ninety Nine and A Half which are not presented elsewhere live. You hear clearly the grumbling bass lines, the part of Tom Fogerty on second of rhythm guitar, which is less prominent on the The Concert (on Live in Europe he was no longer a member of the band) , the harmony vocals by Stu Cook and Tom Fogerty, the drums by Doug Clifford and not a least the singing and solid lead guitar (plus harmonica in Keep on Chooglin') courtesy of John Fogerty. There are whatsoever no written notes of photographs, of this historical musical document, alas. Strangely is behind John Fogerty the mention of playing piano, as well is known he is a multi-instrumentalist, can play virtually all instruments, but piano he did certainly not play at concerts. Another side note: nowadays the complete movie of Woodstock 1969 is around to be showed in cinemas over the world, with all the artists who made their appearance, all, except for Creedence Clearwater Revival however. Isn't it strangly, when have listened to this awesome album? This is real gem and an great asset to my CD collection, which covers all the CCR/John (and Tom) Fogerty efforts. Strongly recommended!
Read more
19 people found this helpful
Report abuse

dave rock
5.0 out of 5 stars Best set played at Woodstock?
Reviewed in the United Kingdom on 19 August 2019
Verified Purchase
I bought this album on the strength of the three Creedence tracks on the 40th Anniversary 6cd box set, which stand out like diamonds in the dust. I first saw the original Woodstock film in 1975, and was struck by the paucity of real rock n' roll played at the festival. A real shame, as Creedence's set would have nicely redressed the balance, and blown everyone else, barring Ten Years After and Jimi Hendrix, off the screen .

The set starts with 7 tightly and expertly played rockers and hits, beautifully played, with Johns voice and guitar sounding impeccable. Then an incredible version of "I Put A Spell On You" raises the stakes, into "Night Time" "Keep On Chooglin" and the final track, "Suzie Q". They may not have taken the acid test themselves, but these final tracks show that they could jam as convincingly as many that had.

Their freak credentials may have been minimal, but this set sparkles from beginning to end.
Read more
12 people found this helpful
Report abuse

clive robey
4.0 out of 5 stars CCR packaging
Reviewed in the United Kingdom on 11 August 2019
Verified Purchase
Excellent album, fantastic sound, but very poor packaging in terms of sleeve notes. Track listing is there and that's it, otherwise it would have had 5 stars.
Read more
14 people found this helpful
Report abuse
See all reviews
Back to top
Get to Know Us
Make Money with Us
Let Us Help You
And don't forget:
© 1996-2021, Amazon.com, Inc. or its affiliates