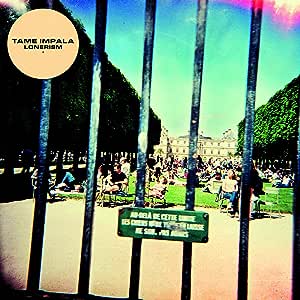 Secure transaction
Your transaction is secure
We work hard to protect your security and privacy. Our payment security system encrypts your information during transmission. We don’t share your credit card details with third-party sellers, and we don’t sell your information to others. Learn more
Details
Ships from
Amazon AU
Sold by
Amazon AU
Lonerism has been added to your Cart
New (3) from
$50.00 + FREE Delivery

UK vinyl LP pressing. 2012 sophomore album from the Australian Alt-Rock/Psych Rock band. In November 2012, LONERISM won the 2012 J Award for Australian Album of the Year. They also won it for their debut album Innerspeaker in 2010. This makes them the first band to have won the J Award more than once, and the first band to have won a J Award for every album that they have ever released. They followed this achievement up in January 2013 by winning the Rolling Stone award for 2012 Album of the Year again, after they also won it in 2011 for Innerspeaker.

4.7 out of 5 stars
4.7 out of 5
1,150 global ratings
How are ratings calculated?
To calculate the overall star rating and percentage breakdown by star, we don’t use a simple average. Instead, our system considers things like how recent a review is and if the reviewer bought the item on Amazon. It also analyses reviews to verify trustworthiness.

Froschaden
4.0 out of 5 stars 1960s psychadelia music style introduced to modern day music.
Reviewed in the United Kingdom on 3 July 2016
Verified Purchase
Mid 60s psychadelia music re-introduced a few years ago By Tame Impala, with a nod to groups like Chocolate Watch Band, Shadows Of The Knight, and Electric Banana (aka Pretty Things), Tame Impala (The Impalas were also from the 60s) were a breath of fresh air to Glastonbury this year, which is more than I can say about most of the other dismal offerings. Although Tame Impala certainly stood out for all the right reasons at Glastonbury, the album tends to feel a little blurred overall, but the tracks that stand out strangely enough, are the ones that were played there. However, each song can be appreciated in it's own right, so it doesn't detract from the fact that there is a lot of musical content in this well structured album, but as with Pink Floyd, it might take some to realise it's complexity.
Read more
Report abuse

STUART K WILSON
5.0 out of 5 stars Best album surpassing DSOTM and Smile
Reviewed in the United Kingdom on 3 April 2016
Verified Purchase
I first heard Tame Impala in mid 2010 when I downloaded InnerSpeaker based on an iTunes random recommendation. I'm so glad I did, and when Lonerism was released two years later - I was immediately ready to download again. This album is an absolute masterpiece, and almost four years later I feel that I'm finally able to absorb its absolute brilliance. I can now see that it's rhythm is in line with Dark Side of the Moon - which until very recently hadn't occurred to me - even though the psychedelic references to Pink Floyd were clear. However - I don't believe Tame Impala are remotely derivative - they just belong to the same species. There aren't any copies in their work. To fully appreciate Lonerism, you have to experience the live performances - particularly of Be Above it, Nothing that has happened so far has been anything that we could control (Eclipse). Elodie? Melody Prochet.....Set the controls for the heart of the sun. Suns coming Up? Fearless (Meddle). Keep on Lying (St Tropez). Be Above It I originally liked the least - having heard it live - is one of my all time favourites. It has the same underlying pulse as Breathe / Home (DSOTM). Music to walk home by (Time). Elephant almost has the same pattern as Money (DSOTM). But - is isn't DSOTM, it's way more than that. Lonerism is real. It's also musical genius. Endors Toi is without equal (hear it live!) It's taken me years to fully realise it - but is absolutely incredible. Keep on Lying is sublime - echoes of Cirrus Minor - but again, not Cirrus Minor, or any of Relics or Zabriskie Point. If you can get the version with the 7" single of Led Zeppelin / Beverly Laurel - you can see the ideas that developed into Currents. Beverly Laurel sounds like a missing track from A Clockwork Orange
Read more
5 people found this helpful
Report abuse

Mr. B. A. French
4.0 out of 5 stars Something a bit different
Reviewed in the United Kingdom on 22 August 2013
Verified Purchase
I am sure I am not alone in being fed up with the same kind of music that keeps on being churned off the production line. This band came to my attention because of the song, Elephant, which is used on a television advert. Unhelpfully, I cannot recall the commercial now. Sorry about that.

Anyhow, the production has a 1970s feel to it, a lot of fuzz guitar and distinctly modern rhythms. I suggest popping Elephant into YouTube first – you’ll know the tune, trust me.
Read more
Report abuse

Rhys Powell
4.0 out of 5 stars Be-kind, Re-wind.
Reviewed in the United Kingdom on 9 February 2013
Verified Purchase
I do believe this album is pure quality, it sinks it's teeth into the intelligent and leaves no gaps for anyone to really fault. The instrumentals are perfectly toned, the album consists greatly among it's song placement, it has a decent introduction and speaks to all.

Analyzing it, the title name and front cover is a little give away to what really this album is about. I enjoy albums that speak about people, creativity and opens my imagination, I'm afraid this album did not do that for me. The front cover is bliss, and clearly embarks on a selfish perspective on the world that someone wants to relieve, it shows what some songs are written about too; the purity of happiness with family, friends and enjoying the pop-sun. It shows one mans imagination of feeling like he's trapped and still desperate.

The biggest thing that this album represents is the annoying re-lapse is the impressionist who is simply trying to be his idol in John Lennon. John Lennon was in my opinion one of the greatest, most unique sounding voices of all time, but twice? I wouldn't buy an album to listen to someone try and be Elvis, I could go to my local bar and see someone try and do that. The whole purpose I bought this album was from reading NME, and seeing how it hyped up all the re-birth, but it's not a good thing.

A brilliant album and voice, but it's been done before. If someone dis-agrees with my opinion on this, that's fine, but think of all the pop-rock sensation, I like some and that's the first I ever listened to, and everyone on Scuzz now impersonates it with silly Delonge accents and it sucks. That's my view on this.

For the actual album and music itself, easy 4 stars. If it were the original, this would be the new thing.
Read more
One person found this helpful
Report abuse

Amazon Customer
5.0 out of 5 stars Great record.
Reviewed in the United Kingdom on 19 March 2019
Verified Purchase
Great record.
Read more
Report abuse
See all reviews
Back to top
Get to Know Us
Make Money with Us
Let Us Help You
And don't forget:
© 1996-2021, Amazon.com, Inc. or its affiliates