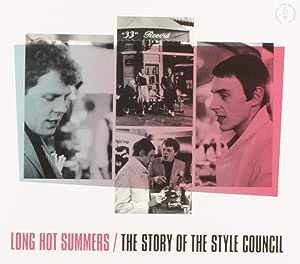 Secure transaction
Your transaction is secure
We work hard to protect your security and privacy. Our payment security system encrypts your information during transmission. We don’t share your credit card details with third-party sellers, and we don’t sell your information to others. Learn more
Details
Ships from
Amazon UK
Sold by
Amazon UK
New (9) from
$17.68 + $3.00 Delivery

Long Hot Summers: The Story Of The Style Council

Two CDs. The Style Council was emblematic of it's creator. Paul Weller, smart, fearless, audacious, with a social conscience totally unafraid to push the possibilities of pop. With their generous slew of chart hits, The Style Council were one of the defining pop bands of the 80s. And they didn't need big hair to get there. And now, finally Long Hot Summers - the long-awaited and eagerly anticipated definitive career anthology teaming with all the greatest hits and more is released. Named with a nod to the band's biggest hit, "Long Hot Summers" is endorsed and co-compiled by Paul Weller himself. As well as the huge hit "Long Hot Summer", the album also includes the band's sterling debut top 5 single "Speak Like A Child" as well as other masterpieces such as the languid "You're The Best Thing", "My Ever Changing Moods" and dance floor filler "Shout To The Top". Long Hot Summers includes two unreleased tracks - an intriguing demo of the top 5 single 'My Ever Changing Moods' with strings, and the extended, 5-minute plus version of 'Dropping Bombs On The Whitehouse'. Of course, it also Includes all the band's classic singles -12 top-20 hits -including the debut single "Speak Like A Child" and the utterly sublime "Long Hot Summer". The album also features key album tracks and fans' favorites such as "Headstart For Happiness".

4.8 out of 5 stars
4.8 out of 5
848 global ratings
How are ratings calculated?
To calculate the overall star rating and percentage breakdown by star, we don’t use a simple average. Instead, our system considers things like how recent a review is and if the reviewer bought the item on Amazon. It also analyses reviews to verify trustworthiness.

Vaughan
5.0 out of 5 stars Super collection
Reviewed in the United Kingdom on 17 November 2020
Verified Purchase
If you liked Style Council in the 80's, and have bought the odd greatest hits collection over the years, then this is probably the CD for you. Apparently selected with help from Paul Weller, it mainly treads down the 'Best Of' path with a few oddities thrown in. For example, the 'Paris Match (early version)' track is not the album version with Tracey Thorn on vocals and isn't a demo, but is a version with Paul Weller on vocals. 'Have You Ever Had It Blue' from the Absolute Beginners soundtrack is the full version and is a lovely track. Even the demo of 'My Ever Changing Moods' on CD2 is fun to listen to (glad they dropped the violin and yes there is the full version on CD1 too).
I always thought that the original albums sounded pretty good and I think that the remastering just adds a bit to the clarity and doesn't have a major impact on the sound - so a job well done.
It's a bit surprising that there is nothing on it from 'Modernism: A New Decade'.
This probably wont convert anybody to the Style Council but does emphasis what a fine band they were and makes me think of resurrecting their albums - there cant be many bands that start off with such excellent offerings as 'Introducing' and 'Cafe Bleu'.
I don't normally mention liner notes, but there is an intelligent appreciation by Martin Freeman, which came as a nice surprise, and good notes by Lois Wilson (journalist and Mojo contributor).
Read more
8 people found this helpful
Report abuse

Jeff Mattock
5.0 out of 5 stars Absolute class
Reviewed in the United Kingdom on 31 October 2020
Verified Purchase
This is the dogs bollocks for a Weller person,after the anger of The Jam,this is the total opposite of those days,such great tunes,headphones on and totally lose yourself in the greatness of the man,happy listening to those who believe
Read more
8 people found this helpful
Report abuse

MPA_Brackley
5.0 out of 5 stars I'm gonna shout to the top
Reviewed in the United Kingdom on 2 November 2020
Verified Purchase
Let's face it, you either like TSC or you don't, great having a load of great tracks on one place. Already listening to it in the garage staying sane undertaking my Phys with lockdown looming, stay safe, keeps on burning
Read more
4 people found this helpful
Report abuse

Arthur Comix
5.0 out of 5 stars Wow! A latecomer writes...
Reviewed in the United Kingdom on 31 December 2020
Verified Purchase
In the 80s The Style Council passed me by. Never having been a huge Jam fan I heard the singles on the radio and thought they were "OK" in the same way I thought other mainstream pop acts were "OK". Not really being impressed by Weller's solo career I had no reason to revisit TSC...until now.
I bought the cd as an Xmas gift for my wife and she's played it through a few times now. Couple of things I do like (which bigger fans may not) is that it's not chronological and it's not just a "greatest hits".
The breadth of styles which TSC cover is astonishing - Isley Bros-style up-tempo soul, jazz instrumentals, electro-funk, gospel-tinged house music, lush ballads, gentle acoustic-folk, politically-charged anthems, orchestral mood music etc - which to some may smack of "genre-hopping" but to me seems adventurous, especially when all the tunes are hummable: nothing seems "forced", it seems like the searching curiousity of an artist trying to expand his art and his creative spirit, without resorting to wilful experimentation. Something like mid-period Beatles, after the dope but before the heroin. That I actually knew far more of the singles than first glance told me I would is a testament to the strength of the melodies.
For the long-time Weller/TSC fan none of this will be a surprise; for a newcomer such as myself this compilation was a revelation.
Highly recommended either way.
Read more
2 people found this helpful
Report abuse
See all reviews
Back to top
Get to Know Us
Make Money with Us
Let Us Help You
And don't forget:
© 1996-2021, Amazon.com, Inc. or its affiliates