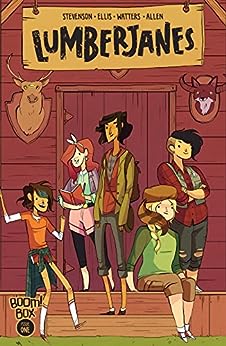 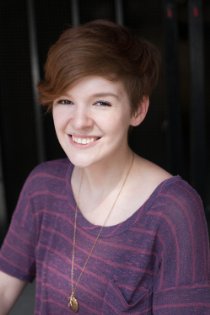 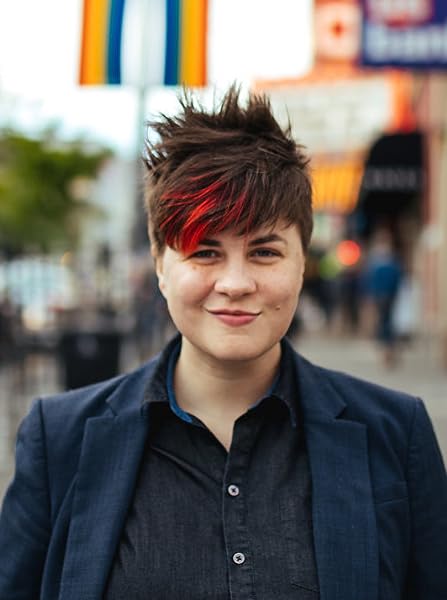 by Noelle Stevenson (Author), Grace Ellis (Author), Brooke A. Allen (Artist) & 0 more Format: Kindle Edition
See all formats and editions
Sorry, there was a problem loading this page. Try again.
Jo, April, Mal, Molly and Ripley are five best pals determined to have an awesome summer together...and they're not gonna let any insane quest or an array of supernatural critters get in their way! Not only is it the second title launching in our new BOOM! Box imprint but LUMBERJANES is one of those punk rock, love-everything-about-it stories that appeals to fans of basically all excellent things.
Read more
Previous page
Next page
Due to its large file size, this book may take longer to download
Kindle e-Readers
Kindle Fire Tablets
Free Kindle Reading Apps
Available on these devices

Noelle Stevenson has been nominated for a Harvey Award, and was awarded the Slate Cartoonist Studio Prize for Best Webcomic in 2012 for Nimona. A graduate of the Maryland Institute College of Art, Noelle is the co-writer of Lumberjanes. She lives in Los Angeles.

Visit her online at gingerhaze.com.

3.8 out of 5 stars
3.8 out of 5
58 global ratings
How are ratings calculated?
To calculate the overall star rating and percentage breakdown by star, we don’t use a simple average. Instead, our system considers things like how recent a review is and if the reviewer bought the item on Amazon. It also analyses reviews to verify trustworthiness.

Alpha Reader
TOP 500 REVIEWER
5.0 out of 5 stars Love this TO THE MAX!
Reviewed in Australia on 10 April 2015
This is ‘Lumberjanes’ Volume One, collecting issues #1-#4 of this popular and amazing comic book series released by Boom! Studios and created by Ross Richie and Shannon Watters. The idea for ‘Lumberjanes’ came from Boom! Studios editor Shannon Watters approaching writer Grace Ellis with an idea to create a girl-centric comic series, from there Brooke A. Allen was bought in for initial character designs and Noelle Stevenson as a co-writer (the eagle-eyed amongst you will recognise Stevenson's artwork from Rainbow Rowell's 'Fangirl')

A single eight-issue story arc was originally planned, but the series received such critical acclaim and fan-response was so huge that it’s now an ongoing series (hallelujah!).

Jo, April, Mal, Molly and Ripley are five besties enjoying their summer at Miss Quinzella Thiskwin Penniguigul Thistle Crumpet’s Camp for Hardcore Lady Types – Miss Quinzella girls are known as ‘Lumberjanes’. But as the summer starts unfolding, the Lumberjanes of Roanoke cabin (love this reference, btw!) get the sense that something fishy is afoot – there’s a weird Bearwoman, talking foxes that warn them of “the kitten holy”, sea monsters in the lake and yetis in the woods. The Lumberjanes intend to get to the bottom of the mystery surrounding their summer camp – and all while upholding the Lumberjanes Field Manual!

This series is the best. THE. BEST! I can’t even put into words the awesomeness that is ‘Lumberjanes’ – it’s like ‘Goonies’ with an extra dose of fantasy in the adventure, there’s a Buffy’s Scooby-gang sensibility, and doses of magical realism that at times reminded me of Karen Russell’s short stories (like ‘Haunting Olivia’ – because I could totally see these Lumberjanes going crab sledding!).

Let me see if I can breakdown the awesomeness of this series, shall we? There’s Jo, the cool-headed one of the group who uses math, science and logic to help get the gang out of sticky situations (she rocks the Fibonacci sequence in one ‘Goonies’-esque escape scene that totally rocks!).

April loves taking notes, making lists and puzzle-solving. She has a flair for the dramatic, adores a good pun and while she’s physically the smallest of the group, she dominates at arm-wrestling.
Molly is a skilled archer, but sometimes worries that she doesn’t contribute enough to the group – she wears the hell out of a Davy Crockett hat, and is a great cheerleader for her friends.

Mal looks like a punk-rocker, but she’s a Discovery Channel-aholic and is the very cautious member of the group, who will do anything to save her friends if they’re in trouble.

Ripley is the most energetic of the group – she’s got a mean karate-chop and does a great ‘fastball special’. She’s like a can of fizzy drink that someone’s just shook up and is completely hilarious.

These protagonists are so darn brilliant and diverse, I adored each and every one of them. And then there are the secondary characters who also kick-butt: Rosie the camp director whose like a tattooed rockabilly mama-bear, and Jen the Roanoke cabin's scout-leader who takes her job and protection of the girls very seriously.

I also loved that two of the main characters have a budding romance that’s beginning to unfold in Volume One – Molly and Mal have some completely adorable scenes of timid attraction, and I can’t wait to see where they lead because I’m already shipping them so hard!

This comic series is funny as all get out – there’s a testosterone-fuelled male camp director who’s like a caricature of misogyny, proclaiming he’s going to “catch a fish by wrestling it away from a bear!”. And the way these girls take every challenge (be it lake-monster, wrestling statues or crazed scouting lads) in stride is both admirable and brilliant.

‘Lumberjanes’ has set a new benchmark for comic books with me – I can see myself becoming an annoying spruiker of the series to anyone and everyone who’ll take reading my reading advice! I’m so in love with this series, and totally kicking myself that I wasn’t aware of its existence sooner so I could have bought each issue as it came out. As it stands I’ve now got to wait until October, when Boom! Studios will be releasing Volume. 2!

Marty
4.0 out of 5 stars Interesting first issue
Reviewed in the United Kingdom on 17 April 2017
Verified Purchase
Story is interesting and makes you want to know more. Artwork is good, although I did think some hands looked more like claws at some points, I know hands can be difficult to draw. Overall I enjoyed the concept and so will be continuing with Lumberjanes and look forward to the next instalment.
Read more
Report abuse

Hamish Drummond
5.0 out of 5 stars Issue #1 and volume #1 are not the same thing.
Reviewed in the United Kingdom on 21 October 2015
Verified Purchase
Lovely, but not the same as Vol. 1 which I only realised after purchase. Ah well, caveat emptor etc.
Read more
One person found this helpful
Report abuse