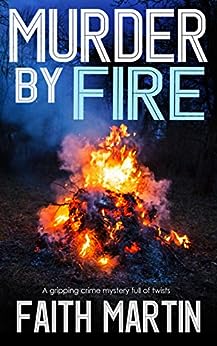 by FAITH MARTIN (Author) Format: Kindle Edition
See all formats and editions
Sorry, there was a problem loading this page. Try again.
Looking for a brilliant bestselling murder mystery with a feisty female detective?

Meet DI HILLARY GREENE, a policewoman struggling to save her career and catch criminals.

David Merchant’s body is found in a bonfire in his back garden. David was a publisher and devout Christian. Who would want to kill this seemingly very decent man?

DI Hillary Greene faces one of her most puzzling cases as she struggles to find anyone with a strong motive to kill the pious publisher.

Then, as Hillary unearths greedy business partners and an estranged son, her focus is diverted when a new team member is targeted by a vicious gang.

Hillary’s under massive pressure and will she finally crack? And if she does, where will she go from here?

This is a crime mystery full of well-observed characters, which will have you gripped from start to the absolutely thrilling conclusion.

MURDER BY FIRE is the tenth in a series of page-turning crime thrillers set in Oxfordshire.

WHAT READERS ARE SAYING ABOUT MURDER BY FIRE:

“A must read for all crime fans.” Greta

THE LOCATION
Kidlington itself, the home of Thames Valley Police HQ. Almost regarded as a suburb of Oxford, there is some debate in Kidlington whether it is a town or a village! If it’s a village, it’s a very large one, with supermarkets, garages, plenty of pubs and a small shopping centre. It sits on a plain that was once devoted to farming, with several small satellite villages around it, such as Hampton Poyle and Yarnton. It also has a small airport, once known as Oxford Airport, but recently renamed to include London in the title!

THE DETECTIVE
DI Hillary Greene
An attractive woman in her forties, Hillary Greene is a police officer of many years’ experience, and came up through the ranks. Consequently, she knows how the system works, and is fiercely loyal to the force without being blinkered to its faults. Popular with the rank and file for her no-nonsense attitude and competence.

PLEASE NOTE THIS IS A REVISED EDITION OF A BOOK FIRST PUBLISHED AS A NARROW POINT OF VIEW.

4.5 out of 5 stars
4.5 out of 5
1,155 global ratings
How are ratings calculated?
To calculate the overall star rating and percentage breakdown by star, we don’t use a simple average. Instead, our system considers things like how recent a review is and if the reviewer bought the item on Amazon. It also analyses reviews to verify trustworthiness.

JB
4.0 out of 5 stars Excellent structure of the story by being engrossing
Reviewed in Australia on 16 August 2018
Verified Purchase
Excellent structure of the story by being engrossing, entertaining and somewhat bewildering as there are many twists and turns that make guessing the ending almost impossible. Faith writes with such a colorful phrase that I am forming in my mind the beautiful Oxford locations that she describes. The characters are structured realistically in a way that makes them believable.
Read more
One person found this helpful
Helpful
Report abuse

Kindle Customer
5.0 out of 5 stars But I don't do reviews
Reviewed in Australia on 26 July 2018
Verified Purchase
First, her team had disintegrated around her: Danvers was transferring back up north, Barrington had quit, and Gemma, whether she was aware of it herself yet or not, would soon be promoted and transferred away. And Mel was still dead. Mel would always be dead. Even Donleavy was leaving her, for if he got his promotion — and Hillary couldn’t see why he shouldn’t — he’d not have the time for her that he usually did.
Read more
One person found this helpful
Helpful
Report abuse

Sasha
4.0 out of 5 stars Hillary is very good at what she does
Reviewed in Australia on 24 April 2019
Verified Purchase
Another crime and another successful end. The fact that Hillary is human enough to seek help to cover her tracks, despite being a good cop, shows that she is human like the rest of us. Hmmm.... what will this mean for the rest of her career?
Read more
Helpful
Report abuse

Bet Tea the Oz.?
4.0 out of 5 stars A story with several interesting sub plots.
Reviewed in Australia on 10 May 2018
Verified Purchase
Enjoyed the read having several stories running parallel to the main investigation.The story ends leaving the possibility of a follow on book.
Read more
One person found this helpful
Helpful
Report abuse

Kindle Customer
4.0 out of 5 stars Developing nicely
Reviewed in Australia on 21 November 2018
Verified Purchase
So the team is moving about and finding their own way. Just as you get attached to characters they let you down.
Still, a good story, and I'm looking forward to the next one.

D. Hawthorne
TOP 1000 REVIEWER
4.0 out of 5 stars Reasonable murder mystery
Reviewed in Australia on 16 May 2018
Verified Purchase
Reasonable murder mystery. As usual, Martin has the reader guessing until DI Greene solves the crime, or, in this case, two cases. Martin does not cheat the reader by hiding clues from them.
Read more
One person found this helpful
Helpful
Report abuse

Peter Conlon
5.0 out of 5 stars Down to earth and good characters
Reviewed in Australia on 8 November 2020
Verified Purchase
I like all of the Hillary Green books, good real characters, and nicely down to earth, (if I have to read or hear "Serial Killer" one more time) keep up the good work Faith Martin.
Read more
Helpful
Report abuse
See all reviews

pat hall
5.0 out of 5 stars Another brilliantly thought out murder mystery.
Reviewed in the United Kingdom on 7 April 2018
Verified Purchase
I feel rather sorry for Faith Martin. Because her army of fans, me included, love the Hillary Greene series so much and cannot wait to read the next book, it must put relentless pressure on her all the time , so much so that I am becoming increasingly alarmed that she may consider ' doing away ' with Hillary altogether, and the ending of this story clearly indicates that maybe this could be the beginning of the end for DI Greene's career in the police force !
Time will tell, but since we now know the series will continue from 11 to 17 maybe her detecting talent will progress in another direction which will no doubt prove to be as compulsive reading as the last ten books.
Murder by Fire had me guessing right to the end with a startling twist in the tale which I never saw coming, and I eagerly await the publication of no. 11.
No pressure though Faith.
Read more
7 people found this helpful
Report abuse

Jessie Johns
4.0 out of 5 stars A most enjoyable read.
Reviewed in the United Kingdom on 5 June 2018
Verified Purchase
This year I decided that I was only going to read light crime novels and Faith Martin's Hillary Greene police series fit the bill perfectly. Neatly written -- dialogue particularly good I think -- a likeable heroine and believable sub-characters with plots that are not particularly challenging but quite pleasing, I have only a couple of reservations. First is the author's seeming obsession with her characters' hair colours and styles. Second is her own obvious predilection for 'trouser suits' and faux silk blouses. in which she continually dresses her female characters. Really quite irritating and totally unnecessary. A good editor should have picked these up. Also, while each book in the series sort of stands on its own, one should ideally start with the first in the series and work ones way through them in order. So saying, they are an enjoyable read.
Read more
5 people found this helpful
Report abuse

Robert Crouch
5.0 out of 5 stars A joy of a series
Reviewed in the United Kingdom on 18 November 2021
Verified Purchase
In this tenth outing in the series, DI Hillary Greene has more than a puzzling murder to contend with. But that’s the joy of this series – there’s always plenty of conflict and challenge in the backstory. This time, it’s the members of her team posing the problems.

When David Merchant’s badly burned body is discovered in his back garden, it’s evident he was murdered first. A Christian man with strong convictions, he upset a lot of the people he met with his views and beliefs. But why would anyone want to kill him?

The lack of a clear motive leaves the team with a struggle on their hands. Meanwhile, Barrington has relationship problems that are taking his mind off the investigation. David Chang, a bright new recruit to the team is targeted by a local gang. Then there’s Janine, who’s just given birth, dealing with an internal investigation into her conduct.

And if that’s not enough to distract Hillary, her superintendent, Brian Vane, still has a grudge to settle with her.

Many of the issues are resolved, some at a personal cost to Hillary. But true to form, she finds the missing link that enables her to solve Merchant’s murder. All she has to do now is solve her own problems.

Looking forward to Hillary’s eleventh adventure, especially after the surprise ending to this one.
Read more
Report abuse

Father Ted
4.0 out of 5 stars "A tangled web"
Reviewed in the United Kingdom on 23 December 2018
Verified Purchase
The Hillary Greene novels never disappoint. The characters outside the police station, whether criminals or law-abiding citizens are always convincing. One of the highlights for me is Faith Martin's acutely accurate observation of people and places that surround her.
We've grown accustomed to the various mix of police personnel with whom she shares her quest to solve yet another murder mystery. Different players move in and out of focus, some are either killed off or they move on to pastures new. That's life.
In this tale, many of the familiar elements were on show. A new arrival, DC Chang was introduced with a story thread that involved Chinese thugs. Just for once, this felt less convincing than in previous books in the series. As for the murderer, well I won't spoil the fun, but it wasn't the hardest matter to work out given the character of the victim.
Every long-running series has a hiccup. Not quite 5* this time, but still a must-read for Hillary Greene fans.
Read more
2 people found this helpful
Report abuse

GERALD
5.0 out of 5 stars The most intruiging of murder cases.
Reviewed in the United Kingdom on 15 October 2018
Verified Purchase
This is a really absorbing story. Many books have a plot and one or two sub-plots, but this book set in the police headquarters. that has been the base for all the previous Hillary Greene novels, has a multiplicity of sub-plots, arising from the private lives of and relationships between the team that has been built up in previous books. I feel that I have come to know these police men and women; almost that I have worked alongside them,sharing their frustrations and high spots of their investigations.
The ending was unexpected and wrapped up the case quickly once Hillary had her moment of inspiration.
Looking forward to the next in the series very much.
Read more
3 people found this helpful
Report abuse
See all reviews
Back to top
Get to Know Us
Make Money with Us
Let Us Help You
And don't forget:
© 1996-2022, Amazon.com, Inc. or its affiliates