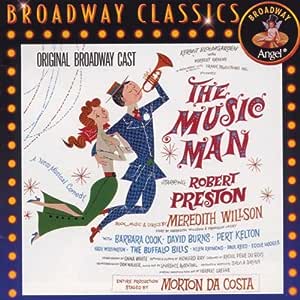 Secure transaction
Your transaction is secure
We work hard to protect your security and privacy. Our payment security system encrypts your information during transmission. We don’t share your credit card details with third-party sellers, and we don’t sell your information to others. Learn more
Details
Ships from
Amazon US
Sold by
Amazon US
New (4) from
$39.98 + $3.00 Delivery

Although Robert Preston and Barbara Cook put in stellar performances, it's the music that's the star of this hugely successful document of the 1958 Broadway smash.Written entirely by Meredith Willson, it drew from memories of his childhood in a small Midwestern town.Preston plays a travelling salesman/con artist, while Cook is the dull spinster "Marian the Librarian," whose love for Preston's character makes her come alive."Seventy-Six Trombones" has become a marching band standard, while "Ya Got Trouble"(featuring dizzying fast-talk from Preston) and "'Til There Was You"(with a gorgeous vocal from Cook) remain well known even among those who have never seen the show.The latter was also a favourite of the Beatles, who covered it on their first album.--Dawn Eden* Genre: Original Cast Recordings
* Broadway Cast - The Music Man [Original Broadway Cast] [CD]

4.7 out of 5 stars
4.7 out of 5
105 global ratings
How are ratings calculated?
To calculate the overall star rating and percentage breakdown by star, we don’t use a simple average. Instead, our system considers things like how recent a review is and if the reviewer bought the item on Amazon. It also analyses reviews to verify trustworthiness.

Paul A. Keevil
5.0 out of 5 stars A Delightful Discovery!
Reviewed in Australia on 5 January 2020
Verified Purchase
This is one of my favourite musicals! I only knew it in the film version. ThBroadeay cast was a true delight.
Read more
Helpful
Report abuse
See all reviews

Justin
4.0 out of 5 stars No comment
Reviewed in Canada on 3 February 2019
Verified Purchase
It was a gift
Read more
Report abuse

G. Schneider
4.0 out of 5 stars One tiny flaw in an otherwise brilliant recording
Reviewed in the United States on 7 September 2014
Verified Purchase
This is by far the best recording of this wonderful show that I have ever heard. I first got it in 1961 when I was in college. The performances are all spot-on. Preston was amazingly into it that early in the run of the show. (Original cast albums are traditionally recorded on the first Sunday after a show opens...unless, of course, the show has closed by then!) There is no comparison between Barbara Cook in this recording and Shirley Jones on the soundtrack. Barbara was (and is) one of the purest, loveliest sopranos ever to grace the Broadway scene. Shirley was too soft-focused, a vocal equivalent of shooting a scene with Vaseline on the lens. (And her "Being in Love" was no substitute for "My White Knight".) The Buffalo Bills got to sing all their songs here. (Some were cut from the movie version.) Iggie Wolfington as Marcellus Washburn was far, far better than Buddy Hackett (though no one could make a good song out of "Shipoopi").

So why didn't I give this five stars? Simply the sound quality. Capitol Records put so much echo onto it that it makes it sound like it was recorded in a rain barrel. All the other recordings of the show I have deliver better sonics, but nothing could ever match and certainly not surpass this gem.


Read more
9 people found this helpful
Report abuse
See all reviews
Back to top
Get to Know Us
Make Money with Us
Let Us Help You
And don't forget:
© 1996-2021, Amazon.com, Inc. or its affiliates