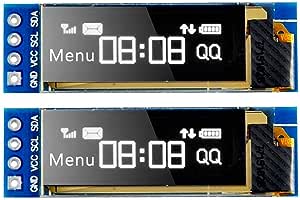 4.4 out of 5 stars
4.4 out of 5
147 global ratings
How are ratings calculated?
To calculate the overall star rating and percentage breakdown by star, we don’t use a simple average. Instead, our system considers things like how recent a review is and if the reviewer bought the item on Amazon. It also analyses reviews to verify trustworthiness.

hackeritalics
5.0 out of 5 stars Really Wonderful little displays!
Reviewed in the United States on 10 June 2019
Colour: 0.91 Inch WhiteVerified Purchase
These things are tiny! That worked out well for me since the projects I was making were suppose to essentially stay out of the way if all went well. I used the Adafruit SSD 1306 Libraries and they worked great. They are low power and bright.
For the adafruit library examles, they really are over the top. There is no "hello world" essentially, so just do a google search for a hello world example for the libraries to get a basic starting point. Also, to rotate the display 180 Degrees, put in display.setRotation(2); in the setup. Basic usage for those libraries are..

As for the hardware, the displays are nice and small. If you think of your breadboard, they are 4 rows high, then about 12 slots wide. (That's the entire board.) Voltage range is impressive and seems to operate at lower than 3.3, but I'm running it on 4.5v and there are no problems. (Basically, 5v from the wall but through a diode on the arduino). It takes around 5ma. With a watch dog timer and adjustment I bet you could get a whole pro mini project to run at under 3ma standby while keeping the display going. Refresh time on the display is very fast and cameras don't pick up any multiplexing/flicker. They did not come with headers, but the plated through holes are very well done and take solder well. The holes are pretty snug, which means it's strong. It will be hard to desolder these after, so google some tricks on removing header pins to make your life easier!

If this was a useful review to you, please give it a thumbs up! :D I think a lot of people had these questions..
Read more
60 people found this helpful
Report abuse

Spike
4.0 out of 5 stars Only if you know what you're doing
Reviewed in the United States on 8 May 2018
Colour: 0.91 Inch WhiteVerified Purchase
Update 1:
I am in the middle of investigating why i'm still having problems with this device. Since posting, I have discovered that, at least with the NodeMCU8266, pull-up resistors may not be required, contrary to my initial review. (Indeed, the schematic diagram in the picture list seems to indicate that they are built in.) I have confirmed that the device can also work with Arduino Uno, so it appears to be both 3v3 and 5v compliant, as described. However, the Uno only works if a 4.7kOhm resistor pulls-up the SCL line. Odd.

On the other hand, I cannot get it to work reliably, and it is not certain that this display module is at fault. Time to pull out the logic analyzer and see what is going on.

I am provisionally changing my rating to 4 stars, because a) it may work as expected and b) the vendor has been extremely helpful trying to resolve the issue amicably. They are good, trustworthy people. (As an aside, they have indicated that they have requested their supplier to include headers, but no luck. Not a critical point in any case.)

I'm going with 2.4 stars here. I received two units - they both work.

1) I understand the frustration of R.Arnold's review. However, the Adafruit library does work in sample code ( ssd1306_128x32_i2c ). Knowing I2C pretty well is required though. I learned the hard way. Had an 8266 (3.3v) as MCU plus an Adafruit temp/humidity sensor and this display on the I2C bus. I knew that I2C requires pull-up resistors on SDA/SCL, but the sensor has builtin pull-ups, and theoretically you only need one set. The sensor communicated fine and I was able to detect both devices using the I2C scanner code in the Adafruit library examples. No signs of life from the display, though, until I added 2 resistors from 3.3v across to SDA and SCL - one apiece of course. Yeah! (I used 4.7kOhm - YMMV.) Don't understand why the display's I2C address was detectable on the bus, but didn't actually display anything without the additional resistors. Still, including a rough schematic in the package would help speed debugging, especially for those new to I2C.

(BTW, the reset pin referenced in the Adafruit library appears to be optional and can be changed in the source from "4" to "LED_BUILTIN", at least on an 8266.)

2) I don't find the text to be very legible without strong readers. It is crisp, but very very small.

3) There are reasonable economic (seller) and utility (buyer) reasons for not pre-soldering headers. But would it break the bank to toss in a couple 4-pinners?

4) There are no mounting holes!
Read more
14 people found this helpful
Report abuse

Steve Danielson
5.0 out of 5 stars Works great for me and very visible
Reviewed in the United States on 12 January 2019
Colour: 0.91 Inch WhiteVerified Purchase
This review is for the "0.91 Inch White" - I bought the two pack and am using it for prototyping an arduino GPS speedometer type project. I'm using it with the Adafruit_SSD1306 library and their FreeMonoBold24pt7b font for numbers, fills the screen and looks great. My soldering skills are weak and when I tried to unsolders the headers that I put on one board so I would resolder on some wires I burned out the trace, but that's my fault. I bought another two pack, I really like these displays so far. I'm taking it to the track this weekend to test, will write back.
Read more
5 people found this helpful
Report abuse

P. Meyer
5.0 out of 5 stars Both work fine on a clone Nano
Reviewed in the United States on 13 February 2019
Colour: 0.91 Inch WhiteVerified Purchase
Update: these are x32 and I was running the x64 example sketch. they work fine. The vendor contacted me about my review and were eager to help, I will buy more from makerfocus.

Old:
I tried 4.7k pull-ups on clk & dat but nothing helped. I2C scanner sees them but the ssd1306_128x64_i2c example doesn't display anything. The program proceeds through its phases as if the boards are working, but they remain blank.
Read more
3 people found this helpful
Report abuse
See all reviews
Back to top
Get to Know Us
Make Money with Us
Let Us Help You
And don't forget:
© 1996-2021, Amazon.com, Inc. or its affiliates